I have read a great deal of debate and mis-information about fitting later W211 E Class genuine MB wheels to the W210 E Class, I would like to think that this is the definative answer to this often asked question.

As a generalisation the wheels will fit, with a couple of important proviso’s.  The first is that although the PCD and hub centre diameter are exactly the same for both wheel series, the fixing studs and their associated stud ‘dome’ diameters are different and to do the job in safety a special set of wheel studs needs to be obtained and fitted. The dome on the stud nut seats snugly with the radius seat machined into the alloy wheel casting this allows a large contact surface area for load bearing and facilitates correct centrering enabling the mount of the wheel securely to the hub

The original W210 wheel fixing used a M12 wheel stud (lug-nut) and the later W211 uses a M14 wheel stud, both of the same style but with different radius seats and are as such incompatible. (M12 stud has 12mm radius seat and M14 stud has 14mm radius seat)  You will have to get a customised set of studs that have an M12 threaded portion but with the M14 type radius seat to correctly mount these wheels.  You will need to purchase a set of wheel studs like these  http://www.alloywheelsdirect.net/option/bolt_packs    BOLT PACK 4.

The wheel and tyre combination should be fine with all models with the note that Avantgarde models that have lower suspension, be prepared to reduce the tyre width if there is any foulling.  I have the Elegance model of the E320 CDI W210 and the W211 ‘Yilduz’ wheel –  7.5Jx16  –  fits perfectly with 235 55 16 tyres (the widest profile MB specify for this for wheel on the W211)

The ET offset values of the older W210 is ET38 and the later W211 is ET42.  Clearly the few mm difference in the ET allows fitment of the later genuine wheel without fowling of the rim but if you decide to use non-mercedes aftermarket wheels observe caution and aim to get wheels with an ET offset at least within the above range. (ET38-42)

They look nice on the car and I think its well worth the effort! 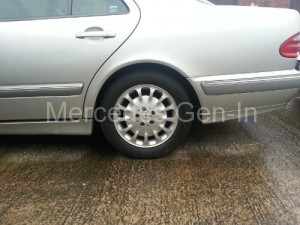