A recent MOT test flagged a 50% imbalance left to right in the rear foot brake circuit.  Handbrake efficiency was perfect and balanced across the axel. 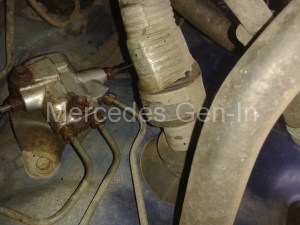 A replacement unit must be sought, the later unit made of cast steel, fitted to Non-ABS Yaris models, although of the same format and size will not suitably replace the alloy Corolla unit unless the existing female M10 pipe flares are remade to M10 male flares. This is because the mating union receivers machined in the valve body have male tapers at their base and only mate with M10 female flared pipes.  Connecting the incorrect unit will result in the unit leaking as proper hydraulic sealing will be impossible.

Due to restrictive access to the bulkhead area it is almost impossible to use a flare tool to reform the brake pipe cluster. It is recommended a like for like part is used. However if unavailable a Yaris steel cast unit could be used if the above considerations are adhered to.

Bleeding the system by gravity and then using pedal assist will remove trapped air from the refitted valve block. Power bleeding is made impossible by the push on brake master cylinder cap having no thread on the reserve body to attach/seal the power bleed device.

I hope you find this information useful.