My first comment is, what a ridiculous design of the Mitsubishi 2004 turbo diesel engine to require the removal of the crankshaft pulley, just to remove the plastic timing cover to access the fixing bolts on the water pump – totally outrageous!  All that was required was a sectional timing cover to allow the mid section to be removed without encircling the crank pulley. The job would have been far easier to complete. 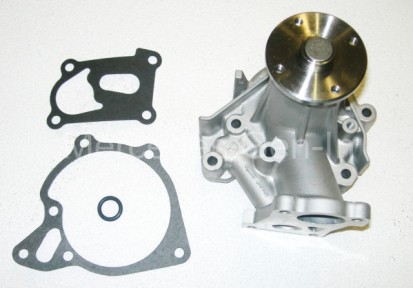 We initially noticed bubbling into the expansion bottle and traced the fault to a coolant leak from the water pump housing lower drain hole.  Antifreeze staining was just visible looking just below the pump area with a torch.

The exchange procedure is as follows:

Remove intercooler and fan assembly, air-box and power steering pump, store to one side. Remove all auxiliary drive belts then remove the two 10mm headed bolts from the top of the radiator header tank.  Undo the 4x 10mm headed bolts on the water pump drive pulley boss. Pull out the viscous fan from the left hand side of the radiator, through the gap between the cowling and radiator made by holding them apart. Remove the water pump drive pulley. 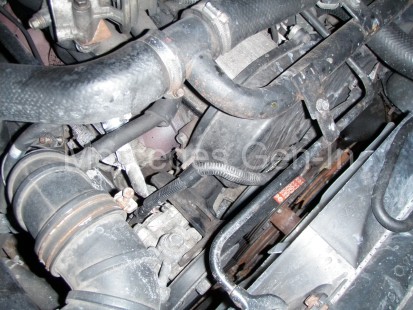 Remove the 3x tensioner bolts on the AC pump belt run and remove the tensioner.  Take out all the 10mm head fixings that surround the plastic upper and lower timing cover, note how the cabling is fixed as it passes over the front of the timing cover, additionally there is one cover bolt accessed from beneath the vehicle, just to the left of the crankshaft pulley.

Remove the crankshaft pulley – a big scale DIY job by any means.  It requires a strong 19mm hexagon socket, 3/4 drive breaker and a long pipe as a lever! 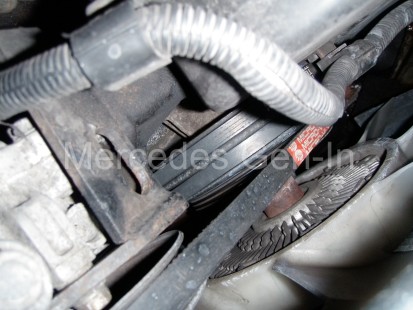 Staining from a leaking water pump – it is the area just above the second ‘e’ on the Mercedes watermark.

Access is now possible to the bolts holding the water pump.  It is also required to totally remove the steel power steering pump bracket, 3x 12mm headed bolts behind the mount frame and one upper 12mm bolt head into the cylinder head forward of the exhaust manifold.

Now remove the bottom hose from the thermostat housing and drain the system of coolant.

Remove the water pump. Note the timing belt tensioner pulley ‘peg’ spring and how it lies against the pump casting and the timing belt tensioner, as once the pump is disturbed this will have to be relocated.  Clean off the face of the block before attempting to refit the new pump.  Swap over the thermostat housing over to the new pump before fittment. Use a slight smearing of silicone gasket compound on both the thermostat housing and main pump gasket. This will help adhere the gasket to the pump and allow you to reposition it without fear of the gasket slipping or moving.  Also use a new O ring with a smear of gasket silicone on the bypass hose connection as you push this in. 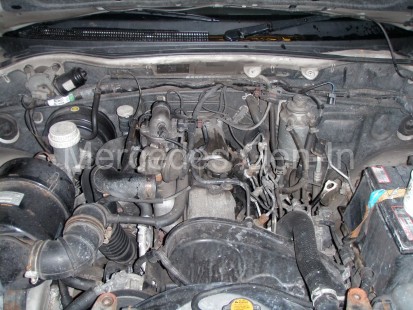 Replace the auxiliary drive belts with new if needed, tension correctly and refill with coolant and test.

It would be my recommendation that due to the complexity of this job and the large number of major parts required to be removed to gain access to the water pump alone, that the timing belts and tensioner pulleys be replaced at the same time.

Five and a half hour job to do the water pump complete, additionally  probably only another hour and a half to include changing the timing belts.  This job is not for the faint hearted!  I would have been so simple for Mitsubishi to have engineered the engine to make this water pump job relatively straight forward, if only they had made the plastic timing cover in three sections, allowing full access without removing the crankshaft pulley! 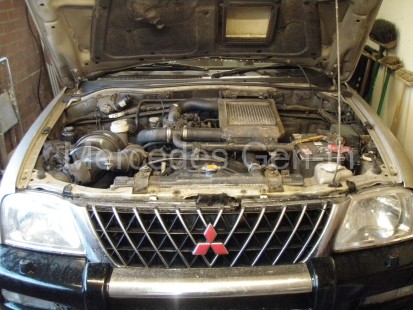