When the central upper console heater control illumination fails is virtually impossible to make sensible adjustments to the cab temperature in darkness and its a job you may have been putting off – with good reason !

Its a real fiddle to replace the single filament bulb that lies behind the control console but is well worth the effort.

First remove the radio outer bezel by slipping a thin flat blade screwdriver under its outer edge where it joins the dashbard either side and pop out the trim. Use care its quite fragile.  Once removed, set the parking brake and select 4th gear, unscrew the four corner fixing screws to the radio and cubby-box chasis and remove the unit from the dash.  There should be enough cable to allow you to place this complete assembly on the seat (twin passenger seat model).

Using a jewellers screwdriver prize out the two plastic cover caps on the upper dash storage tray on the front edge located near the adustable fresh air vent.  Remove the two screws and lift up and out the complete storage tray. There should be now revealed the fixing screws to the heater control console (containing the central fresh air vents) remove these and any further fixings that may exist behing where the radio was removed. The heater console will now be free – but dont pull it out just yet !

Look at this picture first to familiarise yourself with the control unit: 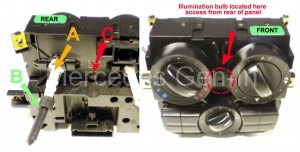 Your control unit will still be fixed to the surrounding chassis that holds the air vents etc but the important things to note are the bulb location Red Arrow C (recessed in the most rediculous position at the rear!) and the rods that connect the rotary controls to the actuators Arrow A and B. Please note the flexible joint on the control rods between the white and black plastic, this allows easy relocation once the job is done and you need to refit the control unit into the dash.  Ok now for the tricky part…. Set both controls to the twelve o’clock position and begin by lifting and pulling slightly forward the top of the whole control panel at the point where the air vents connect to the delivery pipe – it will begin to come away from the dash, as it does the rods will become disconnected from the actuators beneath and should hang free.  With the control panel pulled forward a little (the attached wiring loom will limit the distance you can move the control panel) there is just enough length in the wiring loom to enable you to get access with a hand to insert a power screwdriver bit holder (the magnetic one that comes with all screwdriver kits these days) into the central bulb recess and quarter turn the bulb out (anti-CW). Once turned the bulb will come away with the bit holder.  Use a blob of blue-tac in the end of the bit holder if you are nervous of losing the bulb.   Once removed the bulb can be seen to be part of the holder and is integral to the plastic top-hat locating flange. Here is the correct MB bulb made by Osram 12V 2W part number N000000 002453. 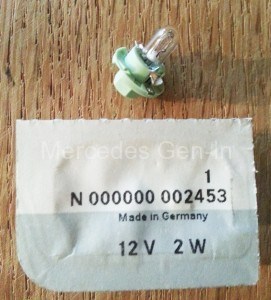 Stick the new bulb into the bit holder with the blue-tac and fit it to the console. Once in place test the lamp. Its very very dim in daylight and even with the general dash illumination brightness set as high as it will go you will struggle to see if the bulb illuminates – enter the cardboard tube of a toilet roll, place one end over either heater control and the other end pushed to your eye this will tell you if all is well.  Place the console back in the dash and look through the apature where the radio was removed, guide in the control rods into the actuator for both the temperature selector and distribution controls. Push gently the console back into place, locating the air feed duct to the fresh air vents, constantly checking that the control rods have not displaced. Once satisfied all is well and the controls operate as they should refit the securing screws and re-asemble the parts removed to rebuild the centre console and radio section of the dash. 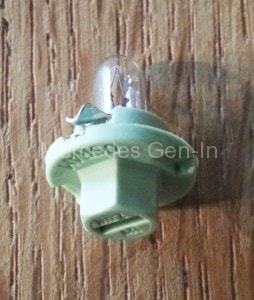 Special Note:  While the radio and cubby is out of the dash, take a few moments to check the in-dash fan that blows cooling air accross the rear of the radio heatsink. (This is what you can hear running behind the dash when you turn on the radio!)  Its located on the rear right of the opening where the radio is fitted and can be removed by undoing a single screw on its supporting bracket.  Once free it can be withdrawn and cleaned off with a soft paint brush and treated to a minimal quirt of WD40 in the bearing section.  It quientened my fan a little although I suppose if needed a new one could be fitted at this time.