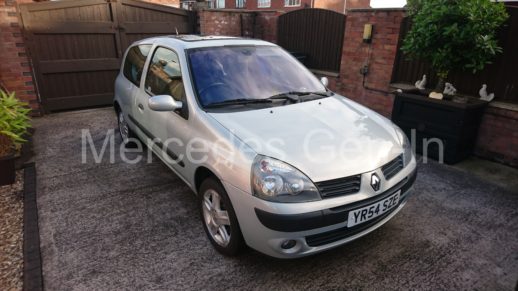 Renault Clio, 1.2 16v, 3 door hatch purchased for my daughter had a serious water ingress problem. As is common the sunroof frame not sealing correctly with the roof I removed the frame and resealed with silicone. Feeling happy with my work I was disappointed to find the headlining still continued to get wet around the interior light unit and the sections above the pillars of the windscreen. Water still found its way into the footwell of both sides of the vehicle. Checking my work, I discovered (while sitting in the car during a down pour) that the glass to hinge pins that hold the metal tag to the glass of the roof were allowing water to pass unnoticed from the outside of the glass, down through the pin and follow the metal hinge behind the roof frame, where the water travelled along the frame lip to wherever it could easiest drip not the headlining. This position could change depending on the parking attitude of the car.

To test for this track water beads on the glass with your finger to the fixing stud and watch if it pools or mystically disappears, if its the latter then you have found your problem.

If the fixing studs have had water in them for a few years its impossible to remove them to reseal, so work black gasket sealer under the outer part of the mushroom of the stud, while pushing the fixing from the underside. once there is a quantity of sealer under it, do the same on the underside. Now take some PTFE plumbing tape and wind it round the underside shaft part of the fixing. Keep going until it forces the stud down on the top surface and takes up any slack on the peg. It took almost a full roll and to start with you never think its going to start to build, keep going it will! Once satisfied all is secure finish off with some more silicone gasket sealer and wipe both the top and bottom glass as neatly as possible. Allow to dry and refit….. Perfect repair!

ABS and steering lamp illumination on the dash, commonly caused by failure of the front ABS reluctor rings on the end of the drive shafts splitting and either rotating of their own free will or breaking off completely. You can buy new rings off EBay and fit by removal of the drive shaft from the hub carrier. Also an interesting happens due to corrosion of the front rings. They grow in diameter as rust scale builds and the rough protrusion of each of the swelled teeth of the tone wheel/reluctor ring actually grinds away the face of the road speed sensor, cutting into the thermoplastic casing and wearing it away until the sensor becomes open circuit. Check this first if you have a fault lamp. Simply unplug the sensor wires behind the suspension mounts under the bonnet and test them with a multi-meter. Often open circuit or readings in excess of a few K ohms indicates a problem. Replace the sensor and clean off the rust scale carefully and lightly grease so that the same does not happen again to the reluctor rings.

As soon as the fault is rectified the fault light will extinguish – no resetting of codes is required once the system is working correctly. ABS Sensor – Genuine BOSCH Euro Car Parts £16.

Its easy to think that a press fit bearing in a rear hub is a simple in and out job, through experience I have found the Clio among the worst to remove, compounded with the added fragile tone ring/ABS version  that limits the use of a torch and localised heat.  These double roller race bearings, are very hard to remove indeed and there is no facility to drive the bearing out from the rear using a drift as they are mechanically flush with the hub casting and with no lip!  The simplest and easiest way to save hours of banging, swearing and cursing is to remove the retaining circlip and simply run a circular weld around the inner of the race with a thick rod and full current. Once done the bearing race contracts and will just tap out. You will be amazed. I have tried a press and all sorts of methods and this is by far the easiest.

Because of the deep seating of the spark plugs in the head, if the previous owner has replaced the spark plug pack and leads with new observe that the rubber ends of the HT towers that reach down to the plugs have a habit of fusing to the plug insulator and when the tower is discarded this remains on the plug down the hole.  New leads are fitted and the car runs, but weather or load dependant will misfire. Look for the heights of the plug towers above the head when fitted, if any are higher, pull them off and have a look down the hole – likely you will see the original black rubber end still on the plug.  Bend the tang of a rat tail file and use it to hook out the old rubber sections, spraying the new items with WD 40 before fitting to aid future release of new items. 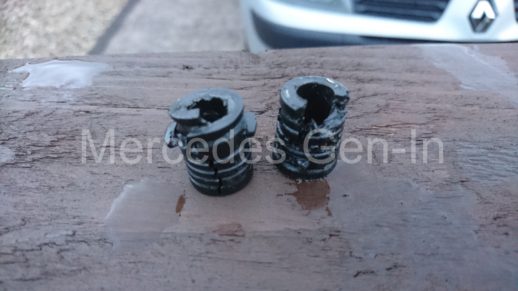