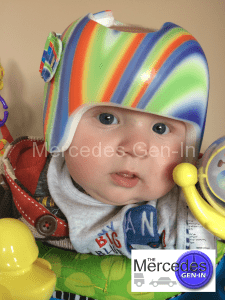 Here is Bobby, our own 5 month old little Mercedes Gen In’er, he suffers from Plagiocephaly.  This is a common condition characterised by an asymmetrical distortion (flattening of one side) of the skull. It is characterised by a flat spot on the back or one side of the head caused by remaining or lying in a single or preferred position. (usually whilst sleeping). The incidence of Plagiocephaly (flattening of the head) has increased since raised awareness and recommendations for parents to lay their babies on their backs whilst sleeping as a preventative measure reducing the risk of sudden infant death syndrome.

Treatments range from simple repositioning of babies below the age of 5 months to more involved treatment with a helmet for children under the age of 18 months. Bobby had some flattening 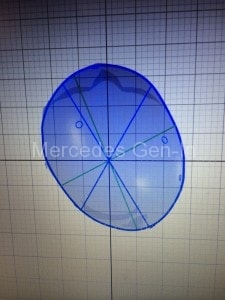 of the skull from birth, his condition worsened over four months and his head shape became a concern.  Helmet correction of Plagiocephaly in infants in the UK is not supported by the NHS, so we decided to get private treatment for our child.

I am writing this short article to raise awareness of this condition with Gen-In readers and hopefully get people to at least recognise the condition early on, referring their babies to their GP/Health Visitor if they detect any unusual head shape changes.

If you see or begin to recognise any flattening of the head in your infant, please go and see your GP or health visitor as soon as possible and discuss methods to reduce this condition before it worsens to the point of our Bobby, who’s head scan can be seen on the right illustrating the problem. (this is a top view looking down, his nose and brow can be seen indicated toward the top of the image)  We hope that over the next six months that Bobby’s skull shape will be corrected by at least 50% although we hope for more.

Thanks for reading this.

2 thoughts on “Plagiocephaly – what is it?”