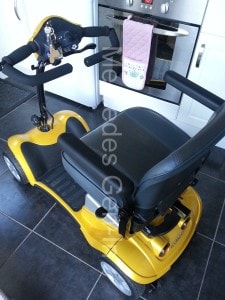 I realise it is a little off topic but I thought I would document a repair to a friend’s Mobility Scooter as I was truly amazed at the cause of the issue.

The problem was with a fairly new Kymco ForU electric mobility scooter.  What happened was on turning on the scooter at the power key switch it would not drive either forward or reverse, the lights worked but the horn (piezo sounder) didn’t?  There was no motion drive in either direction. 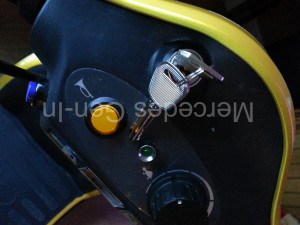 The green indicator lamp next to the power switch showed flashing green.

I suspected the control cable that leads from the handle bar controls to the motor drive module was broken as this is a common fault with scooters that are folded away to be placed in cars etc. But on checking this out it was found to be OK.   Taking apart the head cover from the handlebars and checking the connections proved to be fruitless as everything was perfectly mated and firmly located.  However I began to investigate the horn sounder as it did not make any noise when the button was pressed.  There was 25v DC supply to the switch and it illuminated correctly when pressed.  I took apart the two bullet connectors that fed the sounder and removed it from the chassis.  I placed a known good supply onto the sounder and the connecting wires sparked violently when connected.  It metered dead short! 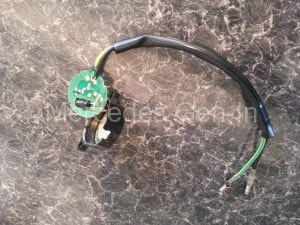 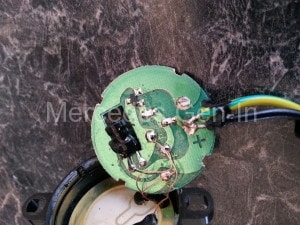 I returned to the scooter and tested the functionality of the other controls; everything was now working with the horn out of circuit.  I had motion drive and correct battery power indication and the green power light that once flashed at one second intervals was now constantly lit.  Incredibly I had found the problem.

Further investigation proved that the illuminated horn switch cables ran to the main control module beneath the foot plate.  An additional pair of wires then ran to the sounder, again out from the main control module.  It seems that the module has a clever short circuit protection that shuts down the power within the unit if any problems occur with external devices or cabling and prevent operation of any sort in a fault condition.   A quick look in Maplin’s catalogue sourced a replacement 32mm 6-30v piezo sounder for £2.49, but I wanted it fixed !  I broke open the faulty sounder and could not believe what I saw – the two supply wires that feed the sounder were connected directly inside the unit.  Once these were soldered onto the correct positions on the internal PCB the sounder worked as it should.  I rebuilt the unit and assembled the head on the handlebars.  All worked perfectly! 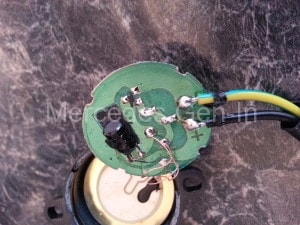 The only other odd thing was that the direction of the drive operation paddles was back to front compared to the  legend stickers that were fitted onto the unit – I asked and was told this is how it had always been and not to swap them over as the user was used to them as they were.  I swapped the stickers over to represent the correct direction of travel and then fully tested the unit.

The sticker problem is no great surprise to me as this error I had seen before on Asian made equipment, in fact only recently I bought a radio that was marked FFO and LOV for OFF and VOLume, nowhere near as serious as incorrect direction marking of a vehicle but hey-ho it was fixed.

This may be of use to someone with similar electric mobility scooter issues.