There is a cautionary tale to this story and it starts with an undetected oil leak on the bearing housing at the end of the half-shaft behind the brake drum. Interestingly, while I was searching for a replacement axle after the event, I noticed many of the used axles that I looked at were also showing signs of leaking on the off-side (UK drivers-side). I cannot answer if this is a common fault with the twin wheel Ford axle, but it does seem strange that none of the ones I looked at were showing any signs of oiling what so ever on the near-side brake back plates! 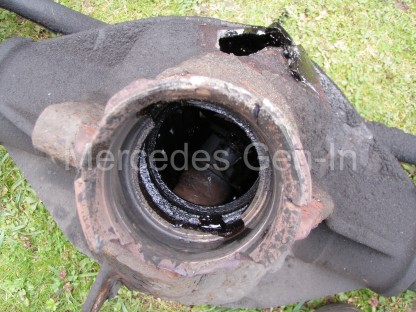 So here is what happened – the Luton Body transit was set for a 600 mile round trip fully loaded, off it set early in the morning. It managed its run to Brighton and half way back before catastrophe stuck. A failed oil seal in the off-side hub of the axle deposited all of the hypoid oil onto the road via the brake drum on the way down. Motorway running at high speed, fully loaded – overheated the pinion bearing to the point of collapse, the seal failed releasing any remaining oil. The nose bearing races welded, causing the pinion to shear into two parts. The inner part falling into the spinning crown wheel,  locking the axle solid. Bursting the gear-train right through the lower differential casting, locking the rear wheels until the casting gave way completely, allowing it to spit out the lump of pinion that was jamming the transfer. 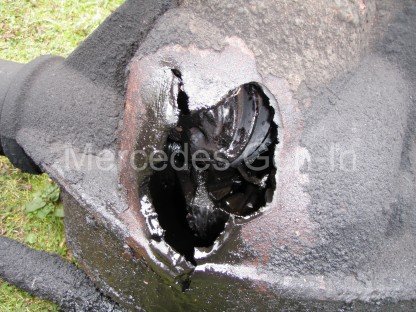 The pinion outer shaft and output flange became detached from the diff and swung wildly underneath, until the prop shaft splined slip-joint let go of its end section of the shaft down the road. leaving the remainder of the spline pocket flayling to cut the end of the exhaust silencer in half like a brush-cutter. The van coasted to halt and had to have recovery – so to did the driver I think. Thankfully no one or thing was hurt or damaged – it was a very luck escape indeed for all involved. 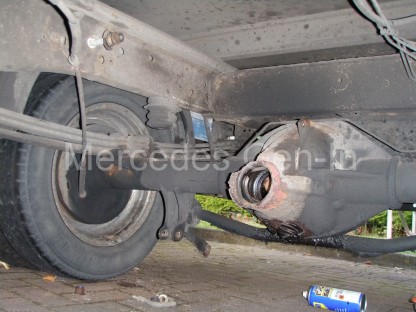 So in daylight the following day, the full extent of the damage could be seen. Now to put it right and get it back on the road!

Although replacement of the axle is not complicated, it does need a little thought and good calculated use of a pair of trolley jacks to manoeuvre what is a ‘substantial’ weight of axle from under the vehicle.

Here is the procedure.

First chock the front wheels of the van and use heavy duty axle stands and wooden blocks to securely support the chassis so that the rear wheels are at least four inches off the ground. This will allow a good working height and suitable clearance to get the axle out from under the vehicle. Remove the twin road wheels from each side of the rear and place them in a position that may offer some margin of safety if the body were to drop (Always use ‘belt and braces safety when working underneath supported vehicles!) 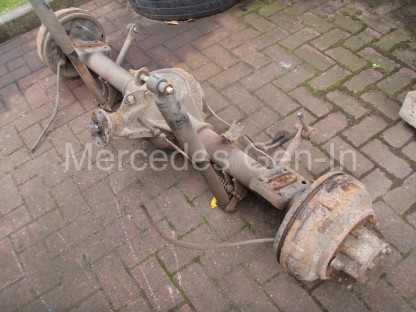 Once you are happy that the body is safe and robustly supported, begin dismantling the axle assembly from the road springs. Wire brush each of the U bolt exposed threads and apply easing oil. If these are really badly corroded, then you may need to apply some heat to get things moving. A 21mm impact socket, short extension and a good breaker bar should start to shift the holding nuts. Once you have things loosened off, remove the lower damper bolts (15mm/18mm) and knock them through, releasing both dampers. 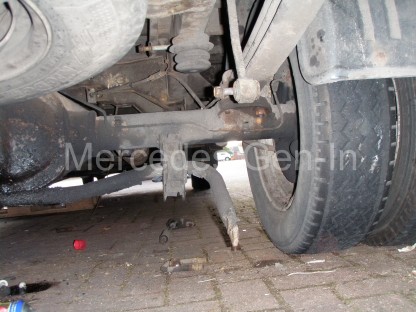 Undo the four 13mm prop shaft flange bolts, and drop the rear section of shaft. Marking the joint position, slide this rear section out of the splined coupling and remove it from the work area. Now release the roll bar at the lower links. 30mm/18mm and pull the links from the eyes on each end of the roll bar.

Undo the brake cable adjuster at the front cable compensator 13mm nut, then unhook both left and right parking brake cable sections from the compensator bar. Using a copper hammer, release the brake drums from the hub assemblies and place them out of the way. Remove the brake shoes from each side noting how they are assembled, and unlatch the parking brake cables from the backplates. Note: always keep the left and right components separate with their associated drums to aid easy reassembly. Now clamp off both flexible hoses and undo the steel brake unions from the flexi’s that are mounted on a steel ‘L’ plate. Once the pipes are free of the single 10mm holding bolt, the hose bracket can be removed from the top of the axle. While you are there, remove the axle breather hose from its spigot and tuck it, with the brake pipes, up out of the way. 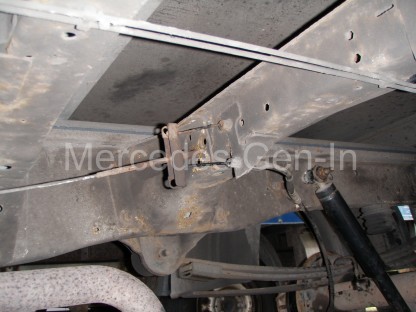 From above the front nose of the diff, above the pinion, remove the single 8mm/10mm fixing pin holding the actuating arm of the brake load proportioning valve. Remove the rod and store it safely.

Place a hydraulic trolley jack under the lower shock absorber damper mounts on either side and jack them to just take the weight of the axle against the springs. Finally remove all the U bolts from the axle plates and noting the position of the spring top plates, ensure they remain in place. With an assistant steading the axle, begin to lower one jack a small amount at a time until the plates on the top of the axle have disengaged from the locating ‘nibs’ that exist under the springs. With care, lower the complete axle to the ground, rotating the assembly until the pinion/output flange is on the ground. Now pull out the axle from under the van using the trolley jacks as skids. 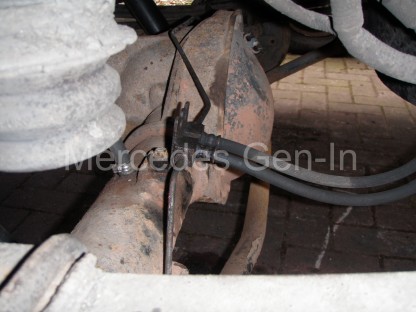 Transfer any components such as wheel cylinders or brake pipes to the replacement axle. Now is a good time to do any cleaning up of the brake backplates etc before fitting to the vehicle.

Reassembly is a reversal of the removal, observing that it is best to support one side of the axle to the point of just being able to locate the u bolts loosely to hold it in place, while you raise the opposite side and locate the spring then secure with its own set of U bolts. Do up the bolts to an acceptable level on both sides, so as to hold things in place leaving the final tightening for when the van is back on the ground. Gravity bleed the brakes by leaving the bleed nipples cracked slightly open on the wheel cylinders while you reassemble the axle. Be sure to keep an eye on the fluid level, as if it is allowed to drop below the master cylinder reserve level, the bleeding job becomes then considerably harder! 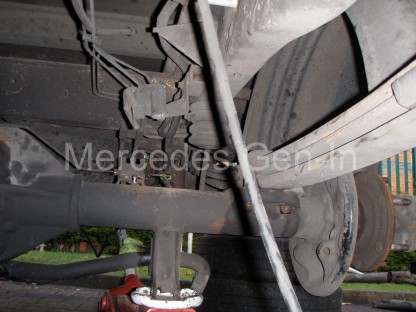 Correctly adjust the rear brakes, reconnect the cables and test the correct function of the handbrake, making sure the drums do not bind. Now use a 3/8 drive socket wrench and remove the diff fill plug and check oil is present to just below the threads, if not – top up, clean and replace the fill plug. 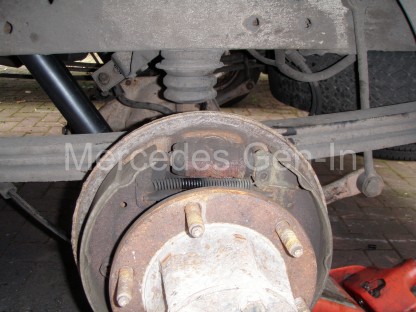 I would estimate to remove the old axle and transfer any required parts to the new/replacement unit will take approximately 5 hours, then fractionally less again to rebuild the van with the fresh parts to get it back on the road, depending of course if you have to replace shock absorbers, parking brake cables etc.