I was speaking to a respected Mercedes commercial / Vito mechanic the other day and the conversation moved toward the correct method to jump start or charge a W639 Vito.  He had seen several instances where people ‘not-in-the-know’ had jumped the vehicle from the under-seat connection and caused fatal damage to the ECU.  He went on to say that ONLY the correct under-bonnet jump point should be used to either charge or jump start the vehicle as otherwise you run the risk of damage to the ECU and/or other electrical systems.  Wise words indeed ! 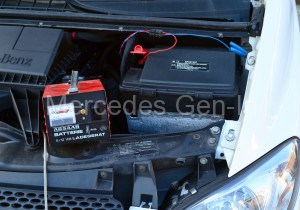