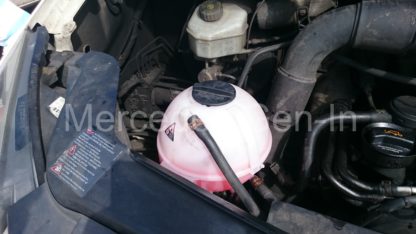 The later Mercedes Sprinter and Volkswagen Crafter (and probably many others) uses a round plastic header/expansion tank in the coolant system.  This nylon spherical tank houses a rather clever float level switch that not only indicates a ‘low fluid level’ but also will illuminate the warning lamp in the dash binnacle if the ‘specific gravity’ of the coolant is less than specified – indicating to the driver that all is not too well with the coolant circuit. 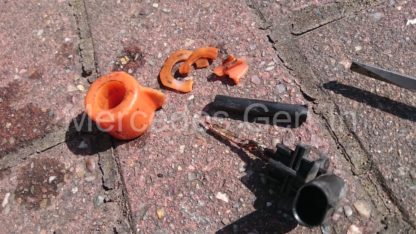 On one of the fleet Crafter vans the coolant level warning lamp had come on and the driver had reported the fact.  When I investigated the issue there was no warning light on the dash, water level was fine but it could be clearly seen that the float inside the header tank had broken up, the plastic becoming somehow brittle and breaking away from its vertical retaining slide/guide. The internal float section is not available as a separate part so a ‘used’ second hand bottle was purchased.  After disconnecting the electrical connector at the base of the sphere, it is possible using a couple of sets of brake hose clamps to remove all the rubber hoses from the bottle in situ.  Once the single torx screw has been removed from the bottle mounting foot, orientating the bottle directly down into the void beside the engine, the connected hose-work can be removed quite easily and the bottle withdrawn upward without losing almost any coolant.  What coolant remains in the expansion tank can then be decanted back into the new bottle once fitted and piped. 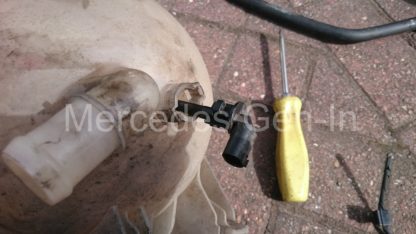 On closer inspection once the bottle was removed, it could be seen that although the float inside the expansion tank was in this case the obvious problem (the actuating magnet it transpired, had been removed from the loose float by the driver, to turn off the lamp – why do they do that!)  Further dismantling of the float switch and level sensor revealed exactly how it functioned and also highlighted a further weaknesses that could in some cases cause issue with level measurement and warning lamp activation. 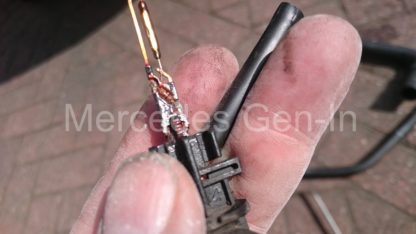 In the base of the tank is a moulded central vertical column that forms an upright guide that the tubular float moves on. The float rides up and down this central guide tube. Beneath and fitting into this tube is the sensor device. Although moulded in a plastic holder, this sensor is actually houses a small glass tube type reed switch that is triggered by the passing float (and magnet). The contacts of the reed switch close as the float magnet descends past a predetermined point and the warning lamp is activated. As the float rises above the reed switch, the magnet no longer causes the contacts to close and they spring open, resulting in extinguishing the coolant warning lamp.  There is a small resistor across the contact terminals of the sensor (around 800 ohms – the one I measured) This I am certain enables the ECU to detect in addition to reporting the coolant level status, a disconnected plug to the sensor, as it would have four possible measured electrical ‘states’ present between the sensor terminals as measured from the ECU. (1): Reed switch contact open, 800ohms = Correct fluid level. (2): Reed switch contact closed, short = Low fluid level or weak antifreeze water mix, Warning lamp lit. (3): Open circuit = Connecting cable disconnected or cut, warning lamp lit. (4) Cable shorted together = Connecting cable linked or fused together, warning lamp lit. 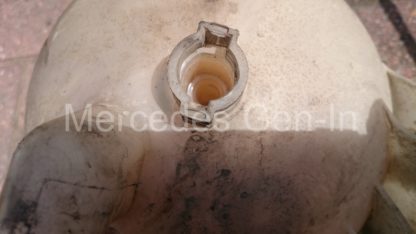 It can be seen from further ‘distructive’ disassembly the level sensor that it is susceptible to corrosion around the resistor and wire junctions, obviously due to the service environment it which it lives.  This discovery is important as if the float inside the water tank looks in good order, it may just be that the level sensor is faulty.  Depending on how keen you are with your fault finding, you could just slot a 1k resistor across the sensor plug and see if the warning lamp extinguished.  If it does, the chances are the sensor is faulty and can simply be rotated through 90 degrees and removed from the bottle base without any draining down or tank removal. Slotting in a working sensor, turning and reconnecting its plug to fit the replacement part.

Hopefully by exploring a little deeper how the float level switch works gives you a better understanding should you ever needed to trouble shoot the circuit.  The coolant level warning lamp is extinguished on the dash as you can see below, however you may notice the engine management lamp illuminated just behind the speedo needle hub – this is due to a faulty glow-plug and is next on the list for repair! 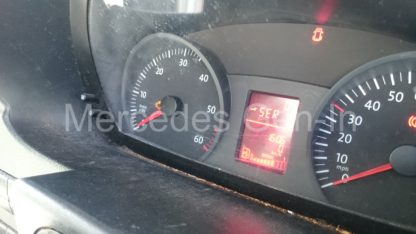