There had been occasion when I would decelerate to an intersection or junction and the engine would not settle to an even idle and remain rather ‘lumpy’. By tapping the pedal only slightly to raise the RPM’s by only the smallest amount resulted in the engine dropping back to its normal smooth idle.  It was also noticed that when pulling away from a junction the accelerator pedal occasion required more travel to get the car moving than it normally would, and when it did begin to pick up speed it moved perhaps more swiftly than intended.  There were no reported engine codes and also nothing illuminated on the dash to indicate a problem.

Asking around, a faulty throttle pedal position sensor was the confirmed as the most likely cause and the consensus of opinion was that they rarely ever caused a fault code to be registered, in fact one of my best contacts in the trade said that this condition directly pointed to the pedal issue, doubly confirmed by the fact that no code was reported. 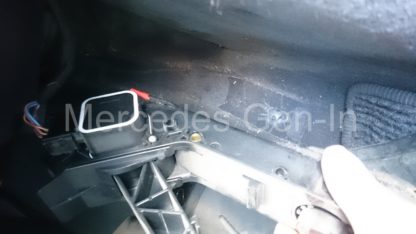 So I purchased a used part from a local breaker for £35 and fitted it in less than quarter of an hour from start to finish.

All that is involved is to remove the floor mats if fitted to gain unhindered access to the accelerator pedal.  In the rear moulding there is a plastic circular bung about half way up the assembly, using a small screwdriver or pick lever this out.  Beneath lies a recessed 10mm nut and washer, undo this with a small socket and extension.  Now grasp the pedal and lift it upward from the bottom, levering it outwards slightly to clear the fixing stud, once clear, pull down to disconnect the pedal assembly from its top locator.  The pedal will now be free, retained only by two wiring/loom connectors.

Disconnect the upper multiway plug to the position sensor model and remove the smaller two pin connector from the ‘kick-down’ switch from behind the pedal.  Note how the kick-down wire is threaded along the side of the pedal assembly and remove it.  The pedal can now be replaced with the new unit, threading the thinner loom back in its correct position and then connecting both wiring connectors back onto their respective plugs.

Feed in the pedal assembly, upper section first. Once located correctly, swing down the pedal to mate with the fixed mounting stud and replace the fixing.  Job done, all you then need to do is replace your mats and test the vehicle. 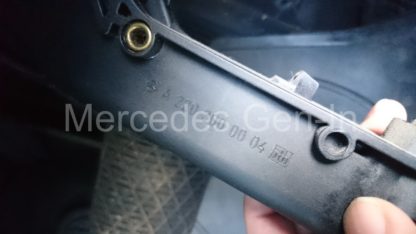 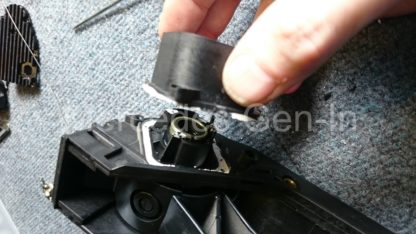 Interestingly there is a large number of people who still believe there is a potentiometer within the pedal assembly, this is of course not the case and the often read advice to spray switch cleaner on or around the sensor is largely futile.  I have taken (broken) this unit apart so that you can see inside and confirm that in this case and most of the Mercedes models from about year 2000 on, this pedal assembly is all solid state and non serviceable. 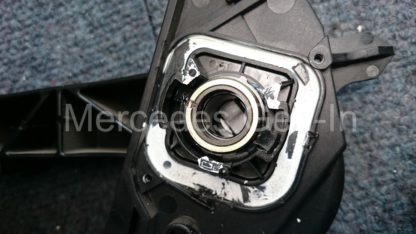 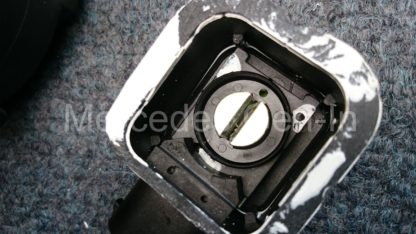 What you can see within the housing is a pair of hall effect semiconductors mounted to a PCB. Each sensor is fixed within a static soft iron slotted core and as the pedal is rotated a small annular magnet rotates about this core.  Minute changes in magnetic field are detected by each of these two ‘Hall Effect’ sensors (compared electrical outputs from both sensors are checked for integrity, before a plausible position signal is accepted by the ECU as a failsafe, much in the same way as there is mechanical failsafe protection built into the pedal assembly by having two individual springs controlling the pedal return, just in case one breaks, allowing the pedal to return to a safe ‘throttle closed’ position rather than simply falling to the floor in a ‘full on’ scenario – Which would be a grand ‘brown trouser’ moment.) 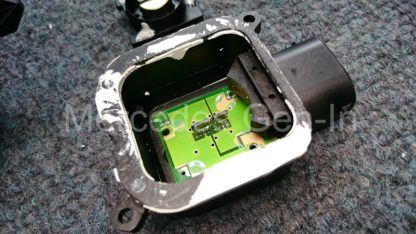 Each degree of throttle pedal rotation at the rotating hinge point, relates to a predetermined magnetic field strength and this is interpreted as positional data referenced back to the ECU. 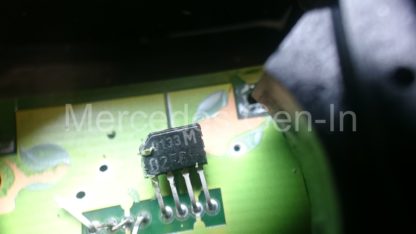 So, not a carbon track of a potentiometer to break or wear out, just electronics.  Obviously failures occur but in general this is a far more reliable, if slightly more complex solution to throttle pedal position sensing.  I would imagine the most common problem with failure of these pedal assemblies is the ageing of the semiconductor devices, once one device gives a slightly different output at any stage of its sweep, this is interpreted by the ECU as a mismatched signal and it will be ignored – hence dead pedal!  Once the signals are again in unison the throttle position is relayed and off you go…