If you hear a thudding or knocking noise from the rear of your vehicle you will want to find out what is the cause pretty quickly as the constant noise will soon drive you mad! 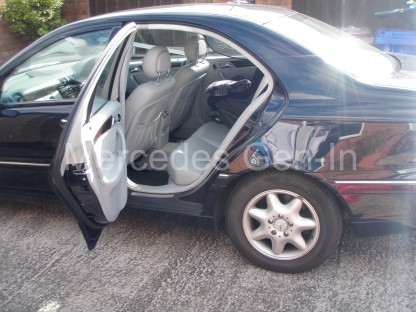 On the Mercedes C200 and actually most Mercedes Benz passenger car models, that all share the long lived 5 link rear suspension set up, there can be several causes.  The first potential cause to eliminate is wear to the anti-roll bar bushes or sway-bar (US).  There is two bushes mounted to the chassis in D saddles that carry the roll bar from one side to the other, any any play here can cause thudding or knocking on uneven ground.  Usually rust staining gives away the poor condition of these busses – what happens is the bar corrodes inside them and presents a rough oxidised surface that eventually wears away the supporting rubber at it moves under normal use.  This is why it is good practice to file down, de-rust and repaint any exposed metal before fitting new bushes. 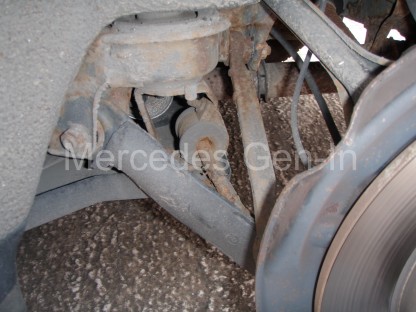 On each end of the roll bar there are drop links (like a dog bone in shape) these have a rubber bush at both ends and connect the roll bar to the suspension hub carrier. It is important to check the condition of these rubbers also. In both of the above cases it is important to inspect all bushes while the vehicle is on all four wheels and in its normal driving position, as lifting one wheel will put the connected bar in tension and you will be unable to see the small amounts of play that would be more than capable of causing knocking noises. 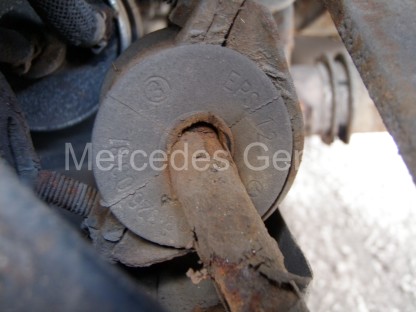 If all looks sound and no play is present, turn your attention to the rubber bushings at each end of all the suspension links, use a pry or lever to check them for play. These bushes do deteriorate and although sometimes looking in poor condition, cracked on the ends with rusty sleeves, they are still serviceable as long as they do not allow lateral movement where the arm could contact its mounting.  Play of this kind would be severe and easily noticeable under power or braking.

The noise you will have most difficulty in finding the source of will be the one that comes and goes at slow speed on uneven terrain, it will be irregular and probably most prevalent while crossing speed bumps or rail lines on a crossing.  If you have checked out all the suspension components, exhaust mountings and interior of the boot area you will be turning your attention to a faulty damper.  As these deteriorate over time they will in most cases eventually cause a knocking as the valving begins to break up internally or in severe cases the internal oil is lost through leaking. The simplest way to check for a faulty damper is shown in the following short video.  Quite often it is possible for a car to pass an MOT test with a faulty or ageing shock absorber, especially if it is secure in its mounting and not in any way leaking.  It is only as the units age that they gets weaker in operation and eventually often fail,  providing little in the way of suspension damping at all.