Regarding the glove box lid, there is a common fault with the latch mechanism most Sprinter (T1N >2006)  and Vito W639 models.  What happens is the glove box either does not latch closed, with the door falling open at every opportunity, or the door simply ‘opens itself’ automatically if you hit a bump in the road.  I have found this simple repair to be very successful if you have all the component parts that have fallen from inside the mechanism. It is rare to lose them, as they are generally trapped inside until you release the handle mechanism. 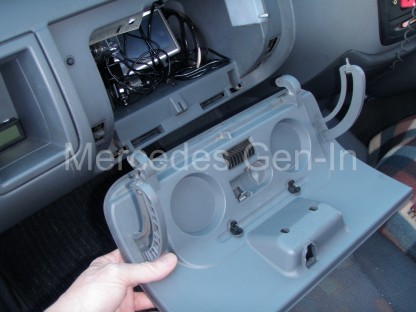 Often the latch itself is the issue, it does not often break – it just falls apart inside.  The steel bars that hold the lower spring and release lever become slack in its pivot holes in the plastic moulding. This eventually moves sideways slightly and pops out of the opposite end.  This skews the catch alignment so it does not function correctly.  Frequently all the component parts are all there and all that is needed is to remove the latch and rebuild the parts in the correct order using a little glue on each end of the two steel rods to prevent any future problems. 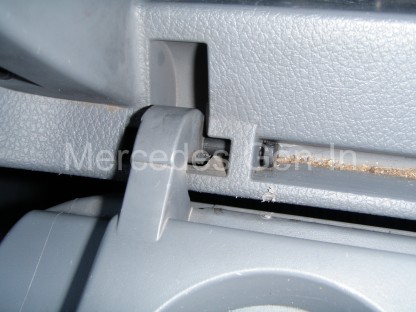 Just for the record, this documented procedure was done on a 2008 W639 Mercedes Vito and the photographs represent this, it is a very similar operation to carry out on an early sprinter latch, as they are much the same part and identical in operation.

First check the striker above the glove box opening for damage or misalignment, if this looks OK then you can remove the door latch assembly by removing the two torx head self tapping screws from behind the latch on the door panel.  It is often easier to remove the complete glove box lid, this is a simple task, as on the Vito as all that has to be done is to slide the two black plastic hinge pins inward towards the centre of the door and this will release the hinges.  Simply push over the two arched door stops to unlatch them from their end stops and then remove the complete door to the work bench 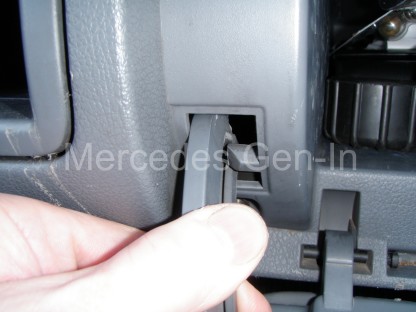 Once the two screws are removed the latch will come away from the front of the door leaving a pocket, inside this pocket look carefully and you may find any combination of these parts loose inside – black plastic lever, spring and small steel bar about 20mm long and 2mm diameter, all depending on what has fallen out of position!  Obviously if any parts are missing or broken then only a new latch can be fitted. If you have a part number sticky label in here, it often peels a little and the free parts can stick to the glue on the back of it! 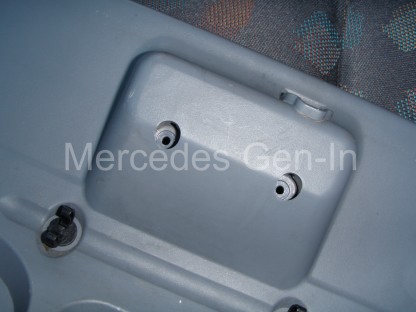 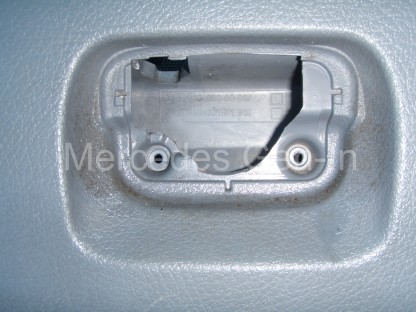 With the latch flat, face down on the handle part begin by checking the location of the uppermost pivot bar, it should be central in the moulding and virtually flush either side.  The black hook part of the catch is sprung to open and you should see a looped spring with coils held either side of the pivot. If the catch does not spring to an open position, investigate and reposition the spring so that it holds the hook open.  Now look at the lower black lever and single spring.  Just as the photographs show the L shaped tang of the lever extends to contact the large diameter protrusion from the external handle flap. 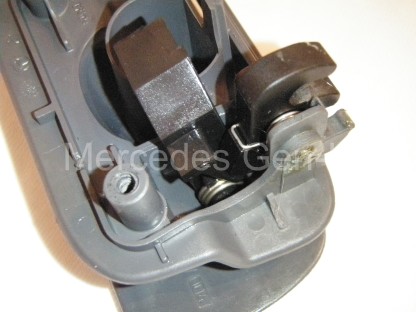 It is fairly obvious how the spring fits into the larger lever as it is moulded and designed to accept one end of the spring which can only be fitted one way (see pictures).  Once this is held in position slide the pivot pin through the lever and locate it in each cheek of the main grey handle moulding.  Test the catch function. 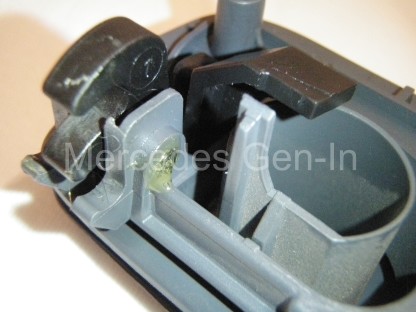 Now all that needs to be done is to fix the ends of the steel pivot bars so that they do not work out sideways again.  This is done by using a glue such as Evostik contact adhesive.  Apply small blobs on the end of the pivots extending to the surrounding plastic, do this on both the inner and outer locations, upper and lower pivot pins in the area where  the bar passes through the supporting outside cheeks.  Be careful not to allow any glue onto the mechanism and only apply the adhesive to the outer parts of the latch.  Allow the glue to fully harden, it will remain slightly elastic, which is good with regard vibration and knocks. 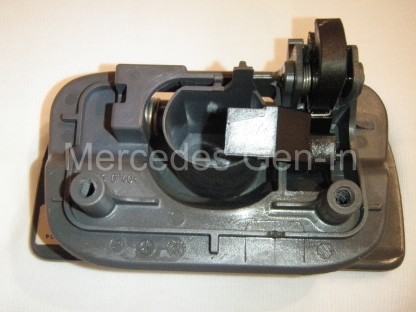 Job done, an irritating fault fixed simply – it should take no more than an hour to complete.