Brrrr…  Its freezing outside, 7.00pm the phone rings…”The van has broken down… it will not come out of Limp Mode.. I need to get my delivery done tomorrow ..”  You know the story I am sure. 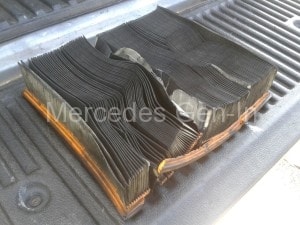 I plug in the code reader.  Some weeks earlier this vehicle had had a repair to the boost actuator valve wiring and I considered this had maybe failed.  The code reader showed the normal ‘Glow Plug Failure’ codes in three instances, along with a single low boost pressure flag.  I cleared the codes and started the van – sure enough it would not rev above a 3000rpm ceiling.

Immediately I re-read the codes, the glow plug issues remained but the low boost pressure did not appear again.  Strange.  I checked the rear lamp clusters for shorts and bulb failure, (All the first base reactionary stuff) the brake pedal switch and the clutch switch.  The clutch switch seemed to be ‘dirty’ resistance wise and I removed it and soaked it in switch cleaner.  Once tested good with the Ohmmeter  it was refitted and the van run up again – no change!  Problems with either of these switches should have normally thrown a fault code.

The engine compartment was an oily mess, this is not unusual for this owners vehicles as they are ‘breathing heavily’ through the separator/breather due to worn bores, but this was not the issue at this juncture.

I checked all the turbo hoses and intercooler for splits or leaks and after a tweak here and there on the hose clips, all proved well.

The driver started the van as I looked into the engine bay.  Signalling him to rev the engine, I felt the pressure on the manifold inlet hose with a squeeze, it was hardly pressurising at all.  This complimented the real-time reading I had previously obtained from the code reader.  On removing the inlet hose to the turbo from the air box (Engine off) I spun up the turbo vanes to check all was well with the turbo.  There was no play at all and the impeller ran freely without any stiction.  The actuation arm on the turbo body that operates the VNT vanes functioned as it should falling downwards on engine-start, oscillating upward and downward on a no load rev.

Reassembly of the intake hose and a signal to restart the engine took place.  I noticed the strangest thing in my torchlight.  As the engine was revved, the concertina moulded rubber inlet hose from the air box-to-turbo inlet was physically shortening!  Continued revving proved the hose was being sucked in and the concertina section was contracting in length as the engine revs increased. 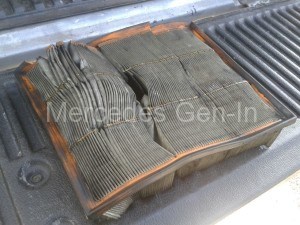 The only thing that could be causing any suction at this point was a restriction in the air box or its fresh air intake routing.  I flipped the lid on the air filter housing and shone  a torch inside.  The filter element was so clogged it had begun to pull out from its foam frame, lifting up, as the paper element unfolded to block the outlet from the air box.  The filter element was removed and what was left of it inspected. – WOW that was almost completely choked with dust and soot, presenting almost a complete barrier to any air flow, so much of a barrier in fact that the engines scavenging for air had begun to pull the air filter into the upper section of the air box, unravelling the filter paper construction and blocking off almost completely the intake air’s route to the turbo.

Removing the filter and testing the engine proved it was the issue, though seeing it with my own eyes, I had no doubt that this was the problem.

Discarding the old filter element I told the owner/driver to get a replacement filter and  slot it in the following morning and all would be fine.  Lesson learned! 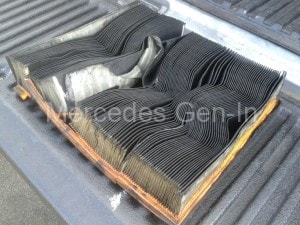 On reflection, this should have maybe been the first place I looked during my diagnosis regime, but at the time – end of the day, dark, cold, roadside, a distance from good tools etc. I had checked elsewhere first.  Hindsight is a wonderful thing and maybe if you are reading this, you too will think on in future to check the condition of that air filter if the vehicle is not known to you or you don’t know when it was last checked out.