It is probably ‘situation normal’ that one of the handbrake cables gave way on or about the coldest period in UK weather for a few months – but it did!  The handbrake lever came right up, the driver reported a loud bang when it happened, so pretty certain it was the centre cable that had failed.  The centre cable being the one that extends from the brake lever to the compensator just fore of the axle.

The bang noise is not usually so pronounced if a left or right wheel cable had snapped because they are fully enclosed and rather shorter than the main front to back cable.  A quick squint underneath revealed I was correct, so we collected a new cable from the dealers.

To replace the main cable is straight forward, however it does hold a few challenges and I hope to outline them here with possibly a few work-arounds.

Firstly raise/jack one rear wheel from under the axle to give you good working clearance underneath the van then venture under and begin to strip out the old cable.  If it is snapped like this one was, the section that fixes to the compensator will have probably dropped off and be long gone by now, so you won’t have to worry about that part! 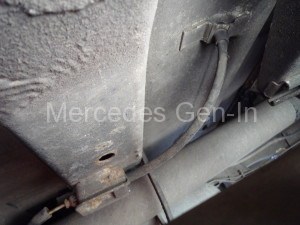 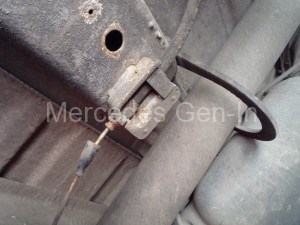 Remove the sliding spring clip that locates the ‘lever end’ cable jacket as it enters under the cab floor, use a hammer and knock through the steel guide and rubber block from the other adjacent bracket. 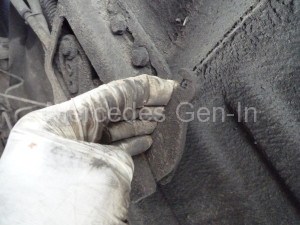 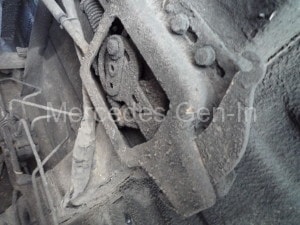 From inside the cab remove the spring clip from the steel peg that holds the cable eye to the handbrake lever mechanism.  Slide this out towards the passenger seat to release the cable eye and remove the pin.  (You may wish to delete the following section from your work method. Not having to work blind makes the disassembly and attachment of the new cable to the lever a whole lot easier and the additional time taken is soon lost in frustration)  Remove the passenger bench seat, one 16mm bolt on the rear edge of the seat base by the passenger door and the other behind the centre seatbelt clasp in the centre of the seat cushion.  You can access the latter by removing the padded foam rubber filler piece from around the seatbelt clasp.  Once these two securing bolts are removed, tilt the seat forward a little and lift the front edge.  This will ‘disconnect’ the seat from the seat base.  There is just enough seatbelt length to allow you to hang the bench seat out of the passenger door to gain full access to the handbrake lever.  With the lever in the down (off) position, remove the large round circular trim piece from the handbrake trim, this covers the two 13mm pivot fixing bolts – undo them.  This will release the handbrake lever from its mounting. Look carefully at the cable you have previously released, between the lever trim you will see that there is a single zip-tie holding brown and black electrical wires to the handbrake cable itself, cut this tie with side cutters – if you failed do this and just pulled the cable from beneath the van you would risk damaging either the connections or handbrake status indicator switch itself at the rear of the pawl mechanism.  Why this cable is zip tied to the moving bowden cable only Mercedes knows!  I suppose it just holds the cable out of the way of the quadrant mechanism and teeth/pawl when in use. 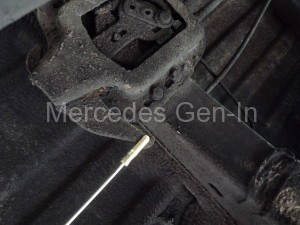 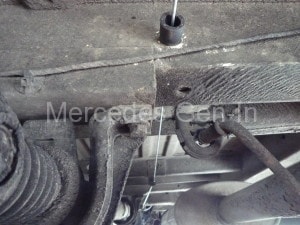 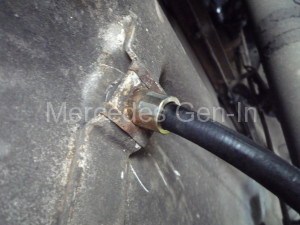 Once the cable is released from the mechanism and electric wires detached, it is free to be withdrawn from under the vehicle by gentle pulling through the floor grommet.

While pulling out the cable from underneath, familiarise yourself with its routing and how it passes through a support hanger and central box section holes before it terminates at the compensator hook.  This is the route the new cable must take, thread it carefully into place, re-using the nylon guide bushings on the hanger and central box section.  It is normal for the nylon guides to break, so be prepared for this by maybe ordering them in advance along with the cable.  However if you find yourself with missing or some broken parts, do not be too worried as there is a work round.

Usually you will manage to rescue 2 good halves of a nylon guide, the others normally fall inside the box section never to be seen again.  After threading the cable into the two halves, slide them onto the hanger, utilising tie wraps secure them to the open C shape.  Use a short 5 or 6 inch length of heater hose or other rubber pipe of suitable diameter to provide a bushing through the hole in the central box section as the middle photograph above shows.  Measure and cut it to length so that it protrudes about an inch either side of the box section, then slit it down its length with a sharp knife.  Spring it over the cable and work it through the box section, using the slit along its length to reduce the diameter if needed to get it through to the other side.  Once in place, it will form a perfectly secure bushing through the middle section, preventing any chafing or cutting of the cable due to vibration. 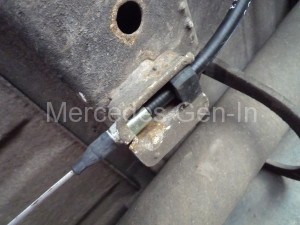 Hook the square cable eye onto the compensator lever, pull any slack to the handbrake end and get back inside the cab to complete the job.  Ensuring the brake switch is connected correctly, feed the round cable eye into position on the lever.  Now slide the pivot pin through the lever trim cheek into the mechanism, securing the cable eye into the pivot as you go.  The pivot pin should now protrude through the mechanism and out of the other side of the lever trim, replace the locking spring clip on the end of the pin.  (Access to do this is greatly improved with the bench seat removed and lever free to be manipulated, you may be lucky to do this without seat removal, but I am sure you will find it difficult to position and align the cable eye and pin to allow its smooth location into the mechanism because of the very restricted space available – Its up to you!) Offer up the lever mechanism to the two 13mm bolt locations at its rear and reattach it to the seat base fixing position with the two bolts.  Use a single zip tie to secure the switch wires to the handbrake cable to prevent them getting trapped or pinched in the ratchet and pawl mechanism.  Replace the large circular lever trim over the tightened pivot bolts. 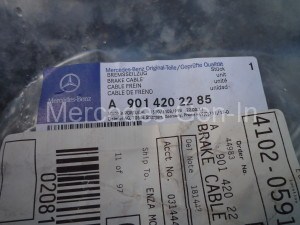 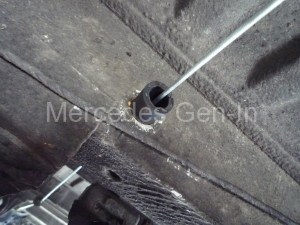 Test the handbrake function a few times and check the dashboard indicator light works as it should.  If all is good replace the passenger seat. Adjusting the cable is straight forward and done by moving forward or aft the compensator box mechanism. It is secured to the underbody using four pins and it has slotted holes, allowing some adjustment of the centre cable tension if necessary.  I have usually found however that no adjustment is needed and the brake works perfectly first time.

Pack up your tools and go indoors and defrost… or as I did  – move on to replacing the Turbo boost actuator valve  and welding up the side loading door runner attachment ready for bringing the vehicle back into service on Monday morning!