In the quest for the best possible drive and ride I had detected a slight amount of front end wander and tram-lining on rutted tarmac.  This was a similar feeling to someone just tugging the steering wheel and forcing the car to steer slightly in an unexpected direction.  This was not a serious situation, just one that I knew shouldn’t be there. 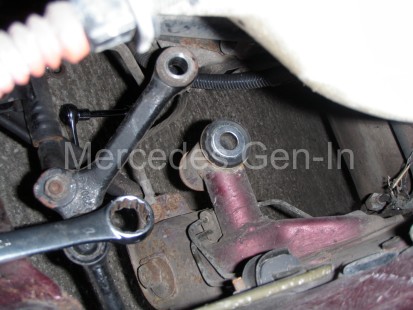 I checked the lower control arm bushes and ball joint on both lower arms, along with all six ball joints in the steering route.  The steering gear checks are easily carried out by simply gripping the ball joint to be tested while an assistant wags the steering wheel left to right.  Any play will be felt in the joint – any perceivable movement between the ball pin and socket, then replace! 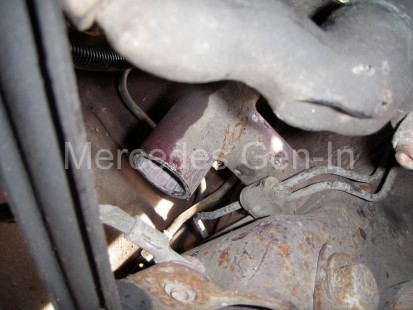 Pay special attention to the drag link ball joint ends that links the pitman arm of the steering box to the idler arm.

Look carefully at the top of the steering idler arm pivot while the steering wheel is being swung, any up, down or side to side movement that can be seen with the eye indicates the bushes require replacement.  Bushes in a kit, with a new through bolt and washers are appx. £130 genuine Mercedes or about £40 for URO imported pattern parts.  (Not the best make in the world – but as Lemforder have recently discontinued their offering, the only available option to genuine parts) 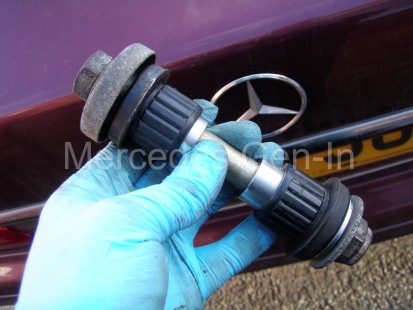 On the SL320 (R129) take a 24mm combination spanner and place it over the head of the idler bolt, let the spanner rest against the engine mount.  From underneath, use a breaker bar short extension and 24mm hexagon socket and begin to undo the nut. Once free, exchange the breaker bar for a ratchet and remove the nut and washer. Tap through the long bolt and remove noting the order of the cup shield and spacer washer.

Removing the old bushes is best done first from the engine bay.  Use a piece of steel tube about 75cm long and place it on the steel lip of the lower bush.  Strike the drift/tube from above in the engine bay with a stout hammer and work your way round the bush lip, driving it steadily out of the chassis tube.  When the lower bushing is removed, get underneath and use a shorter tube/drift through the chassis tube to drive out the upper section. 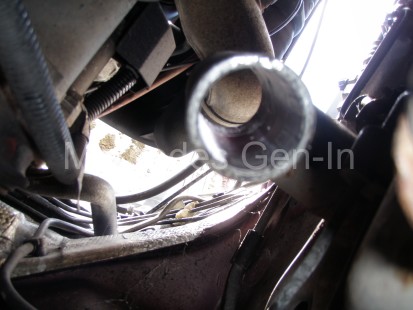 Lubricate the new bushes with red rubber grease. Pop the old through bolt into the new bushing and position it over the chassis tube top, drive it into the tube using your drift/pipe centred over the through bolt head as far as possible.  When the bush is fully home drive the lower section of bushing in from underneath.  As soon as the thread can be seen,  fit the old nut and tighten it up.  This should draw the bush home, reaching the end of the available thread take out the through pin and thread it through the idler arm and retighten until both sections of the bush are completely fitted.  When satisfied replace the old through bolt with the new one, build up the pivot and tighten the nut and bolt fully. 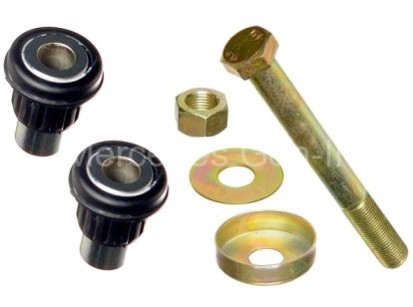