I had an interesting fault to deal with the other day on a 2004 (T1N) 313 LWB Mercedes Sprinter.  The driver reported that the van would not go above 70mph and the ‘fuel filter clogged’ light was illuminating. Switching off and on the engine cured the fault, until trying to attain over 70mph where it would fail again.

The first port of call was to check the fuel filter, as if its badly choked this is the ‘bog-standard’ Sprinter fault with dash ‘check filter’ indication just to compliment the issue. This item was replaced a week or so earlier during a normal service and a genuine MB part was used. What is more this would have been the first item to have been thrown away, suspected faulty even when new, of being the wrong flow rated item if it was not of MB manufacture… So it was not that.

Read fault codes were: ‘Fuel delivery pressure not as anticipated’ and ‘Fuel delivery pressure low’.  Sure enough if you maintained a constant 3500rpm with the vehicle stationary, after about 30 seconds the revs began to drop to about 2000rpm and immediately pulled back up to circa 3000rpm, all repeating in a one or two second cycle.  Idle was normal, regular and unaffected.  Inspecting the clear LP to HP pump fuel delivery hoses – all looked perfect with no visible air circulating, all the connections to the filter including the non return valve and supply checked out fine. 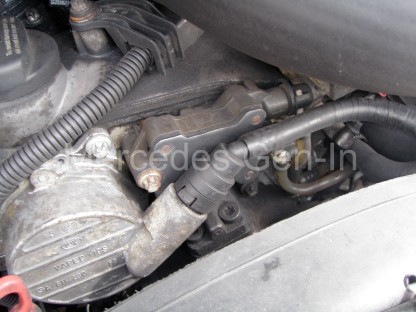 I suspected, against my better judgment, that the low pressure fuel pump had developed a fault.  Strange, because I have never replaced this item on any of the Sprinters I have had through my hands and perhaps this was going to be the first!  Disbelieving it could actually be the low pressure pump, I checked the from-tank fuel delivery hose and blew back the line with low air pressure to prove the flow. This was fine too.  So lets change the low pressure pump… 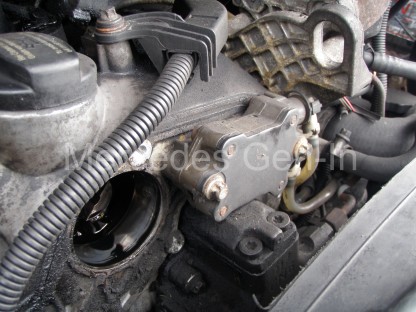 To change the low pressure fuel delivery pump first remove the top turbo hose to gain unrestricted access to the area.  Release and pull off the hard black vacuum pipe that serves the brake servo and tuck it out of the way. Now undo the two reverse torx head bolts that hold the vacuum pump to the cylinder head.  You can use an 8mm multipoint socket if you do not have the appropriate tool.  Take care, as one of the fixing bolts also supports the dip stick tube, make sure you twist this tab carefully out of the way so as not to foul the vac pump as it is withdrawn. 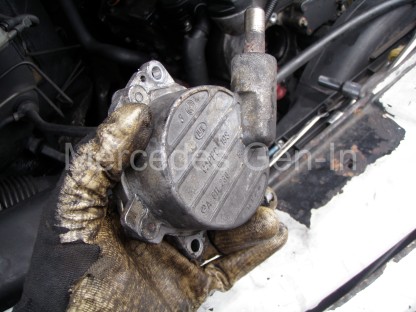 Now with a straight controlled pull remove the vacuum pump from its recess in the head, noting how it engages in the cam shaft and the orientation of the coupling, as this will have to maintained to allow you to refit the pump later.  Once the vacuum pump is out of the way the low pressure fuel pump can be fully accessed to the right.  Next the input and output fuel pipe unions have to be released and withdrawn from their spigots. This is achieved by pushing back the white plastic forks on the snap fix unions and twisting them carefully out of the pump housing ports.  Tuck the two pipes out of the way, making sure that the unions are kept clean and not damaged in any way while you work. 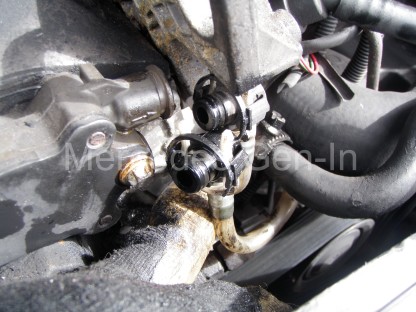 The low pressure fuel pump is now removed by taking out the two remaining reverse torx housing screws and withdrawing the pump from the cylinder head, in much the same way as the vacuum pump, noting the position of the drive coupling.  The replacement pump can be fitted in an exact reversal of dismantling, along with the vacuum pump and finally the  servo vacuum and turbo hoses.

Since you have probably lost some fuel in the lines, possibly you have fitted a new dry-pump be prepared for a delayed start of the engine.  Usually it fires immediately on turning the key then dies.  This is to be expected, keep turning the engine over and within 10 sec or so it should fire.  If not, wait for a minute and then try the starter for another 10-15 second burst, repeat until it fires which should be well before the third try.  Do not ‘hang’ on the starter for long periods, this does no good to either the starter or battery and is best avoided if at all possible.  If it doesn’t start, check your work. Make sure you have not damaged any O-ring seals on the click-on fuel unions and that are connected correctly.

The Sprinter fired up on the second pull and ran wonderfully, I sat with my foot on the throttle, holding revs steady at about 3500rpm – at about 30 seconds into the test the revs dropped and the whole pulsing/revving cycle began again. Well, my gut instinct was right about the low pressure pump, it wasn’t that either! 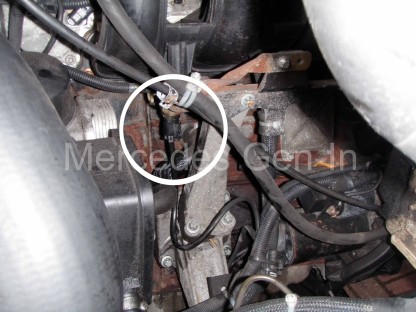 The only thing left to replace was the low pressure fuel sensor, this lives beneath the inlet manifold on the right front as looking in.  It is tee’d into the low pressure, hard plastic clear fuel line on the LP pump output.  Once the electrical connector is released, it takes either a large deep socket or a big ring-spanner/adjustable to crack and remove the sensors taper fit union and unscrew it out of its receiver, make sure you observe and recover the small aluminium seat washer that slips over the brass thread on the sensor, as sometimes this sticks to the casting.  Because the sensor is inverted the seal cannot always be seen to be stuck on the receiver, and the last thing you want to do is to fit a new sensor with new alloy washer while the old one is still in place! 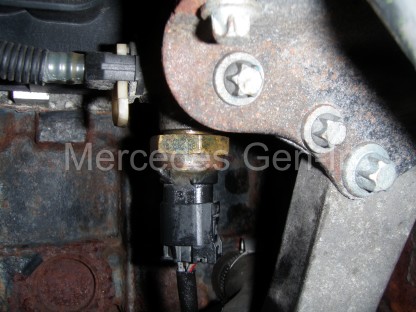 Needless to say, once the van was restarted the fault had been cured.  Although not completely faulty, the sensor must have been signalling incorrect pressure readings back to the ECU that was cutting the engine, when the LP pressure measurement reached its switching threshold, the engine picked up again and the whole vicious circle ensued. 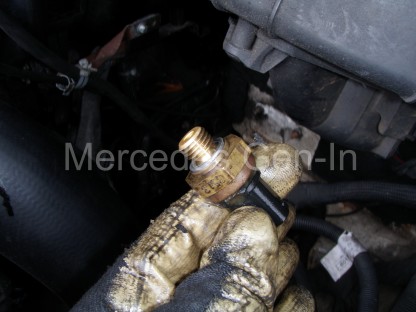 Hopefully this section has given you an idea of things to check if you have a Mercedes CDI diesel engine with similar issues. Things to check in order are: Filter, fuel line connections/condition, blocked delivery pipe from tank, fuel pressure sensor and last – Low Pressure delivery pump!