I recently noticed that the driver side front brake caliper was sticking on my 2008 111 Vito (W639).  It got so bad and jammed on that it began to ‘cook’ the brake pads and smoked, burning hot!  I limped the vehicle home and when all had cooled down a little set to work on investigating. 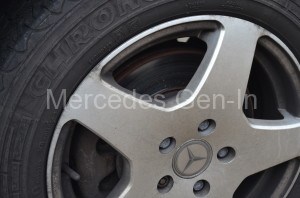 Even before the wheel was removed the caliper slides were suspected to be binding on their surfaces preventing free side to side movement of the floating part of the caliper casting.  Removing the two long 7mm hex screws under the rubber protective caps, top and bottom at the rear of the caliper, revealed sure enough that the lower slide was rusted solid into the casting.  Fortunately I had a suitable 1/2 inch copper drift to hand that I used with a hammer to drive out the rusted slide from the casting.  I cleaned up the surface of the slide pin with a very fine file and wet and dry abrasive paper, and treated the inside of the casting to a similar clean-up.  Using anti-seize copper grease they were reassembled with ease and now moved freely.  If badly corroded, new slides would have to be purchased. 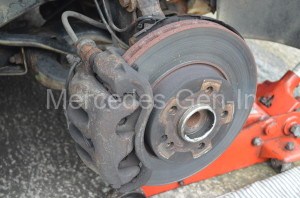 On reassembly I noticed that the lower of the two pistons in the caliper was sticking too, probably due to the fact that it had been locked in one position for a while caused by the seized slide.  Peeling back the piston dust seal I was able to squirt some WD40 into the gap between the piston and casting.  Working the piston back and forth with a piston compressor or ‘G’ clamp I was able to free it off completely.  Pumping the brake pedal 5-6 times 3/4 of the pedal stroke will extend the piston far enough out of the caliper to attend to its chromed surface with fine emery cloth or wire wool (lightly!).  Be sure to block the second piston from extending while you do this. 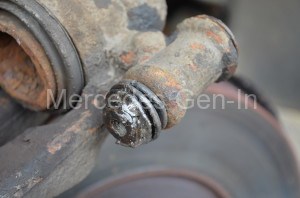 As my piston was well extended and exercised over a 1″ extension from the casting I was able with the careful use of slide grips on the very outer rim, external to the dust seal, to rotate the offending piston by about 90 degrees to hopefully shift any slight piston corrosion areas to another point on the caliper bore and thus give a better chance of it not sticking again in the future (Maybe!).  If the corrosion was severe and the piston did not free up after a reasonable time I would recommend fitting replacement calipers as experience tells that these faults often return. 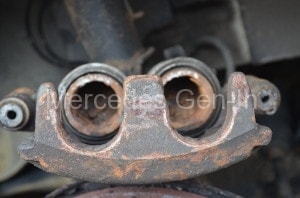 Building back up the drivers side and refitting the wheel, I moved to attend to the other side as a precautionary measure.  Never do brake work to one side of a vehicle, especially the front without at least inspecting the other hand for similar or related problems.  If you ignore this there is a chance your braking could be imbalanced or grab/snatch unevenly under heavy braking.  A good road test proved all was well and  I now relax awaiting tomorrows job list….

12 months later the sticking/binding returned, I decided to pump out the pistons to almost fully extended.  I then clamped the brake hose and pulled both of the pistons from the caliper.  Using a sharp pick or small screwdriver carefully remove the rubber seals from the casting. If the seals are not damaged, they can be cleaned up and replaced into their respective grooves when rebuilt.  However the major problem here is corrosion behind the seal that ‘packs it out’ and tightens it to the piston – causing the piston to stick.  Once the piston and seal is removed all the rust, muck and debris can be raked from the back of the seal groove and cleaned up with fresh brake fluid and a lint-free rag.  Replace the rubber seal and insert the pistons fully home.  If the pistons need cleaning up use fine wire wool.

Once the caliper is back in place, open the bleed valve (11mm) a hexagon socket is the best tool to prevent rounding as it is likely to be corroded. Wait until fluid emerges then tap the casting with a light hammer to release trapped air bubbles.  When the brake fluid runs without bubbles close the bleed nipple and push the brake pedal to bring the pads in contact with the disc.  Reopen the nipple and push the caliper back ejecting fluid as you go, retighten the bleed nipple and build up the wheel, not forgetting to top up the brake fluid reservoir.

While I was in the area I also re-greased the caliper slides before reassembly.  A road test proved all to well.