For older Mercedes Sprinters (Pre-2006) without air conditioning, the recirculated air function is controlled by pressing the heater distribution rotary knob on the dashboard. This in turn lights a red light in the centre of the control knob to indicate recirculation is selected. Pushing the control again will turn it off.

This is a very simple system to troubleshoot and it should be possible to get it working or at least identify the problem quite quickly when you know where to look.

The recirculation system is controlled with a block off flap covering and limiting outside air from flowing into the cabin from the large fresh air intake under the bonnet. If the system is working correctly, once the dash switch is turned on – the flap should close and when the switch is turned off it should open. This physical movement in conjunction with the dash switch position can be easily confirmed by looking into the air box intake. 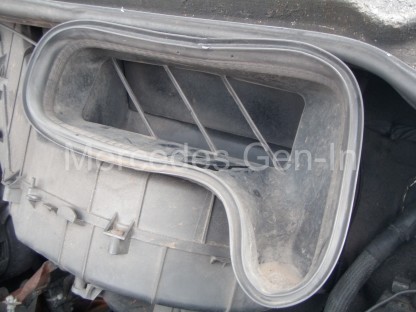 To the right of the air box, up top, is a vacuum controlled sprung actuator that pulls the flap closed when vacuum is applied to it. The vacuum origin is supplied from the ‘T’ piece connector on the brake servo vac pipe junction that also feeds the turbo actuator control valve. The brown hard vac pipe follows up along the top of the bulkhead from left to right terminating at the top spigot of the three port heater box flap control valve. The output from this electrically operated valve is the spigot facing the front. The final spigot at the rear of the valve had a small filter allowing pressure equalisation of the actuator when the valve is deactivated.

NOTE: It has been known that a failure of the recirculation flap actuator valve (venting to atmosphere) or leaking supply pipework has lead to turbo boost control issues. This is because the take off on the brake servo vacuum pipe is shared with that of the turbo control circuit. Any vacuum loss here and the turbo actuator will ultimately be starved of its controlling supply, causing underboss and poor performance. Always add this simple check to your turbo boost problem troubleshooting as it is often overlooked. Frequently the pipe is dislodged when the battery is removed/changed because of its location.

The recirculation flap control valve is fixed to the upper right hand side (UK Models) of the heater box above the battery. It can be removed by undoing a single cross head screw and pulling the unit sideways off a small support post/moulding on the side cheek of the ventilation air box. Electrically there is just one connection to the valve. A 12v supply is applied to the valve solenoid when recirculation is required, changing the state of the vacuum valve to allow suction to be diverted to the actuator closing the flap. 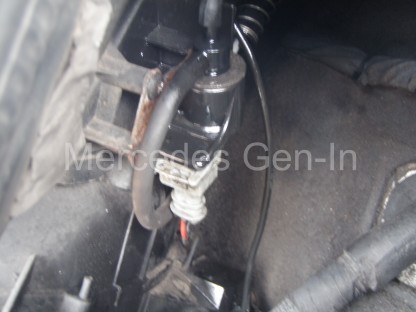 Diagnosis is simple, check that you have vacuum at the pipe feeding the valve, check voltage is present across the two terminals at the electrical connector plug when the dash recirc-switch is on. Rectify either of these faults. If all seems ok but there is no movement of the flap, then temporarily connect the supply and actuator pipe together – the actuator should retract and close the flap – if it does not the solenoid control valve is probably faulty and requires replacement. If vacuum is present at the output of the valve (the port that goes to the actuator) then make sure the flap mechanism is free. You can operate the flap manually by moving the lever at the side of the cabin air box above where the actuation valve sits. If you have no movement and the valve is providing vacuum to the actuator, check the rubber hose has not come of the actuator. If this proves to be OK the only logical remaining problem could be with the actuator itself, most likely holing of the internal diaphragm causing a leak. If this is the case the actuator will require replacement.

Once things are back together and working normally again, you will be able to hear an obvious change in the rushing sound of the air movement through the cabin air ducts when the dash control is activated to select recirculation on either medium and higher blower fan speeds.