Intermittent or no rotation of the heater blower fan is a common problem on the Mercedes Sprinter.  As similar types of fan motor assembly appear on many Mercedes models the replacement of the carbon motor brushes is much the same across the range once the motor is removed. Link to motor brushes suitable for Sprinter and other Mercedes blowers here.

First be sure that the appropriate vehicle electrical supply exists on the fan DC connector and check all circuit fuses before assuming the fan itself requires repair. 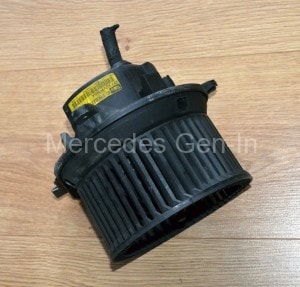 On the Sprinter, start by unplugging the electrical connector from the base of the fan assembly in the passenger side engine compartment.  Remove the 3 cross head self tapping screws that hold the fan/motor assembly to the blower box then withdraw it downward, removing the unit out from the vehicle. Placing the unit on the floor or workbench, begin to release the motor and fan from the plastic body. This is done by inserting a broad flat blade screwdriver into the 3 openings as shown and levering the units rubber mountings complete with motor out of the cover body.  You will need to keep working your way round the holes levering as you go until the assembly works its way out from the cover body. 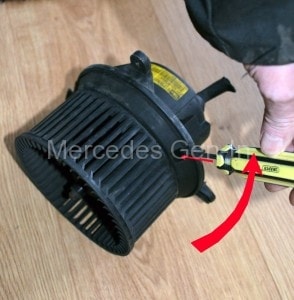 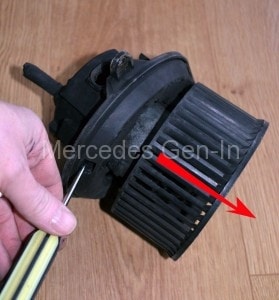 Once the motor and fan are separated from the cover, place the unit on a flat surface – fan side down – and locate the two brush holders as indicated on the photograph below. 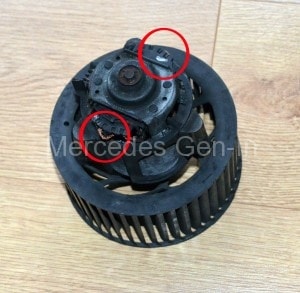 The carbon brushes (A) and braid (B) transfer the electrical energy to the rotating motor commutator and because they are always in contact with the spinning rotor they wear down over time and no longer make satisfactory contact, the motor either becomes intermittent or ceases to work at all.  The high cost of a replacement fan motor assembly from Mercedes  or Auto-factor, makes this an ideal candidate for an economical DIY repair that is quite simple and not too taxing.  Start by obtaining new motor brushes from many of the on-line auction sites available on the internet.  The brushes are standard size across the range of motors used by Mercedes and also many other manufacturers – so are quite common.  The size you need are 9mm x 8mm x 22mm with a braid wire of at least 40mm in length.  You will need a pair and these cost little more than £5 with postage. 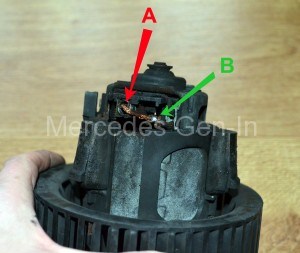 Once the motor/fan assembly is removed from its cover the brush gear is easily seen. First begin by straightening the retaining bars on the brush holders with a pair of long nose pliers, the material is quite soft so bends easily, take care not to break them off!.  These are indicated by the white arrows on the photograph below. 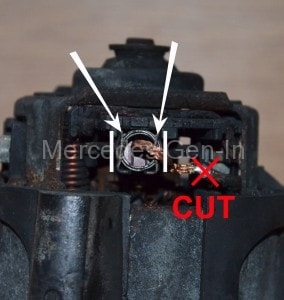 Once the two sides are straight the brush retaining pressure spring will be released, cut the existing braid wire about 12mm from where it is soldered to the electrical contact post and remove the brush by pulling the braid upward.  Once the brush is removed, note which side has the pointed longer edge as the new bushes will have to be fitted in the same way as these were removed.  If you do forget – look at the brush holder and you will see that it is mounted off-centre to the centre line of the commutator shaft, the longer edge of the new brush goes to the holder edge furthest away from the shaft centre line as you insert it.  You may find that the universal brush kit you have purchased has brushes that are a little too long.  This is easily rectified by using a junior hacksaw and trimming the brush length as indicated in the photograph below.  Be sure to maintain the angle of the brush tip and dress the carbon block with a small file to a round it to a slightly concave profile similar to the one on the part just cut off and disgarded. 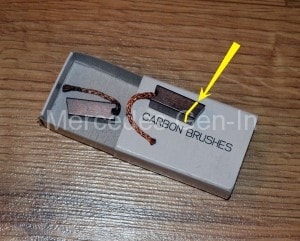 With the old brushes now removed scrape clean the interior guide faces so the new parts will slide easily within them, also scrape the tip of the braid previously cut with the edge of a small file.  Removing the carbon dust and cleaning this copper braid will allow solder to be applied and make for easy joining/tinning of the new braid to this point using a soldering iron and multi-core solder.

Insert the brush into the holder with the longer edge in the correct position as outlined above.  Thread the braid through the centre of the coiled spring and compress it fully into the brush holder below the level of the slots beneath the retaining bars.  Using long nose pliers, distort the retaining bars inwards to block the spring under tension within the holder.  Using a soldering iron, join the new braid to the existing cut stub and tuck its free length neatly into the motor housing void, making sure that it hangs free not touching any metal part of the motor, rotating armature or steel housing.  Complete this on the other side of the motor and once the pair have been fitted begin to re-assemble the motor into the plastic cover.

Align the power connector so that it will appear in the correct position within the cover once assembled.  Slot the three rubber mountings into their respective grooves and push the motor home.  As the motor reaches full insertion in the cover, use a screwdriver to push the rubbers  fully home and latch them into the retaining holes in the cover.  This can best be done as shown in the photograph, from inside the fan blade cage pushing downward into the case body. 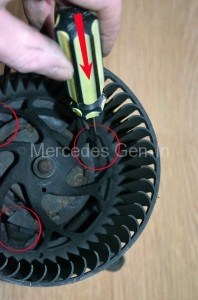 Once the motor and fan assembly are latched fully back into the plastic cover the completed unit can be refitted into the vehicle, reconnected and tested.