If your Mercedes C Class alarm starts to behave strangely with random false alarms sounding, indicators flashing without any alarm sound or even chirping whilst you are driving, then the number one cause for these issues is the siren module.  The siren module is a round black plastic canister about the size of a small bean can, containing an alarm sounder, control electronics and back up alarm system batteries.  It is these internal NiMH batteries that will start to age and deteriorate, giving rise to the conditions stated above. 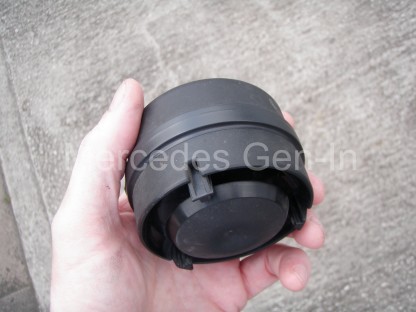 The problem with the batteries is not quite as simple as it sounds.  What happens is they start to leak and spread over the PCB inside the sealed alarm unit.  The electrolyte from these cells is conductive, as it spreads, it bridges circuit tracks and components making the alarm system unstable and causing it to do peculiar things.  A replacement sounder is around £100 from a dealership and once fitted will in the majority of cases, cure any problems you may have. 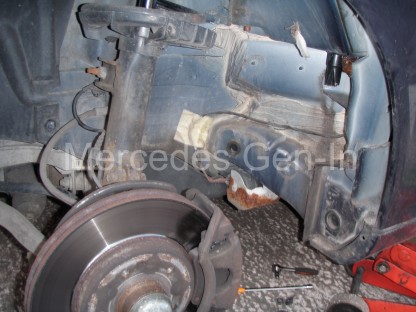 The first thing to do is locate and remove the faulty sounder.  On the C Class (W203) it is located behind the plastic protection panel under the left hand (near side UK) front wheel arch.

Simply remove the road wheel, remove the five plastic 10mm nuts and remaining fixings that secure the inner protection panel. Remove it from under the wheel arch.  You should now be able to see the siren, fitted to a steel bracket that is fixed to the bodywork.  The torx self-tapping fixings that hold the siren bracket to the vehicle are security types with the inner peg.  If you don’t have the correct security tool, just tap them round slightly on their outer circumference to loosen with a small chisel or punch, once slack, they will usually remove with firm finger pressure.  The rearmost fixing is a strange 8mm crimped nut affair, that quickly removes with pliers. Once the support bracket is free, the siren can be unplugged and totally removed from the car. 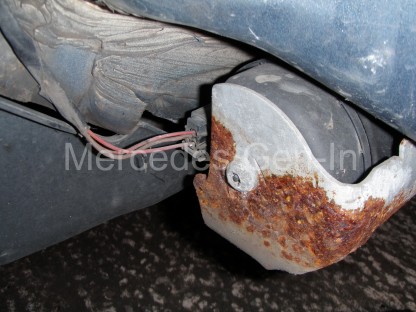 To replace the siren simply plug in the new unit with the car unlocked and alarm de-activated, re-fix the bracket and build up the inner arch panel. Fitting the wheel and lowering to the ground to complete the job.  If you are doing a straight swap-out with a new component and you have good elevated access, it is possible to replace the siren unit without removing the road wheel – by just undoing the trailing edge fixings of the plastic arch liner and pulling them out of the way while you remove/replace the siren unit.

Replacing the batteries in the siren module / sounder unit

If you have been following this site for a while, you will have probably realised that there is a little more on the subject to come –  there is an option that could save you some money and get your alarm working correctly again, for around a £15 chance investment with some DIY time and a soldering iron.  This style of siren module/unit is fitted to many models of Mercedes vehicles spanning many years and this repair technique is applicable to all instances where this type/style of sounder is used.  If you are interested then read on… 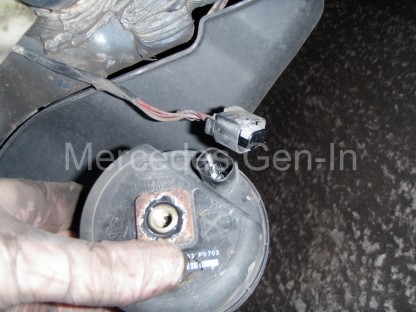 The first thing to be aware of is that the batteries, as they leak, do start to corrode the PCB within the siren unit, if you do catch this in time (and it really has to be quite bad to be unsuccessful) then you can repair the unit very economically.  If however the PCB has deteriorated ‘just too far’ or there is another fault in the unit, you will have probably wasted your money and time, needing to buy a replacement. If its worth the risk of chancing your luck – that is up to you!  Interestingly, if you can live without any audible alarm at all, then you can just leave the siren unit disconnected and tape up the connector. This has no detrimental effect on the rest of the alarm system or its linked components.  My logic in all this is:  If I can fix it for a few pounds then all well and good, if not then leave it disconnected as £100 dealer charge for new or buying a used unit that is probably almost as bad inside as the one I am removing, albeit at the moment still working, are not in this case acceptable options. Equally a customer may decide that the cost to repair a sounder on an older vehicle is just not worth it – so you can just leave it disconnected! 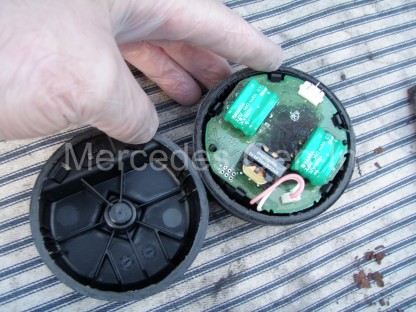 If you decide to have a go at changing the batteries you will need to remove the sounder from its bracket, again a single security torx fixing is the order of the day. Once this is removed the sounder can be cut open.  It is ‘weather-sealed’ and the only way to get it open is to cut carefully around the seam with a junior hacksaw, rotating the sounder as you go.  Do not allow the blade to penetrate deeper than half its width, as if you cut too far inside you may damage the PCB or sounder wiring.  Once the cut is continuous around the siren unit, pull apart the two halves.  The front part will contain all the electronics with sounder, the rear is just a shell cover with an aperture for the electrical connector pins. 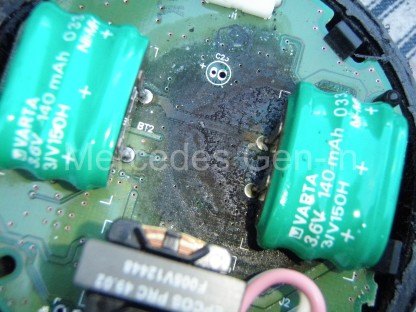 Unclip the sounder plug, pink and white wires inside and unclip the PCB pulling it off its two locating pegs.  It should now be out of the plastic body and you will be able to get a full visual idea of how bad the PCB has been damaged by the battery leakage.  The one pictured is quite bad and to be honest if it was any worse than this I would not go further, so in this instance it was a borderline repair, reducing my odds of it all working out successfully due to the poor condition. 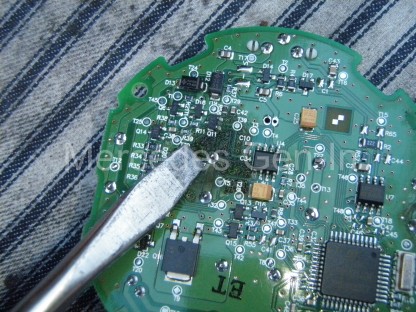 Note how the batteries are polarised, take a photo so you can be sure you are fitting the new NiCd’s with their correct polarity as once you get cleaning, often the markings on the PCB also get removed.  Using side cutters clip off the old batteries flush with the soldered holes and throw them away.  Using a soldering iron heat the remaining part of the battery pin until the solder melts fully, then quickly bang the PCB onto a cardboard box.  This shocks the molten solder and pin from the board and should leave you with clean holes for the new battery contact pins.  Repeat on all eight holes. 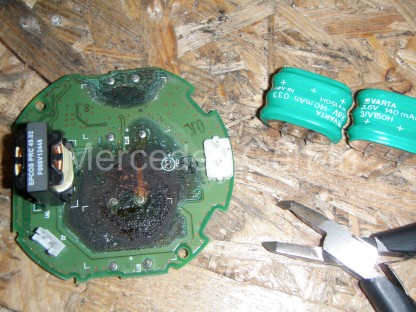 Now you have the board clear, use PCB flux cleaner spray or other electronic solvent to scrub away the electrolyte that has leaked from the batteries, use an old tooth brush and lollypop stick to scrape the most stubborn material away. You can now get an idea if the battery juices have eaten into the copper track, if it passes inspection, continue cleaning the circuit board with an abrasive pad, I used one similar to those used to clean model railway tracks.  Eventually it should look like the photograph. 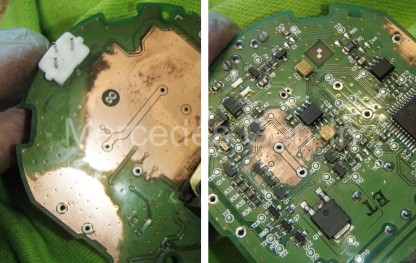 You will need to purchase a pair of replacement batteries from a Maplin store or other electronic component outlet, they are quite a common 3.6v 140 to 160 mAh NiMH cell pack, measuring approximately 24mm x17mm x 15mm  The only issue the replacement batteries have is that the component legs on one side will need slight modification to fit the PCB but apart from that they are drop in replacements. The batteries cost in the order of £7.50 each. Part Number BN-24B 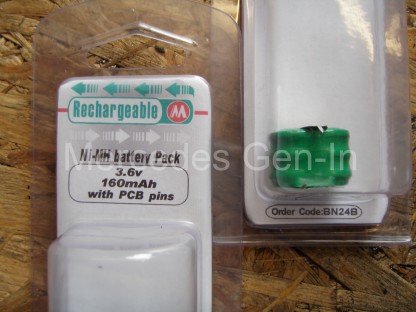 Once you are satisfied with your cleaning, bend up the single mounting leg/tab of each battery into  a ‘U’ shape as you can see in the photographs.  Fit and solder the twin-tab side of the battery to the PCB, observing the correct polarity.  Once you have this side soldered in, cut a short length of thin stripped wire or tinned copper wire if you have it.  Using a small piece of cardboard packing under the edge of the battery solder one end of the stripped wire into the PCB.  Now loop it over the ‘U’ shape you have formed on the battery tag, threading it back into the board. Pull the wire tightly and solder the remaining end to the board.  Now heat and solder bond the wire to the bent tag as it passes through its formed ‘U’ slot. Clip off any protruding wire from the back of the PCB 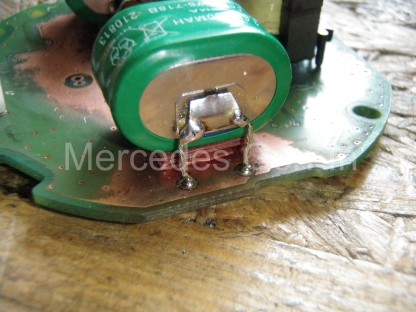 Fit both batteries and check your work for solder bridges etc.  Once you are happy, mask off the siren sounder plug and three prong external connector pins.  Spray the complete electronic board with clear lacquer, both sides and allow to dry thoroughly.  Once dry, refit the electronics to the front section of the siren unit. Connect the red and pink wires to the sounder unit then run a continuious bead of silicone sealer or epoxy resin around the plastic seam of the housing.  Offer up the rear plastic housing section and press it into position. 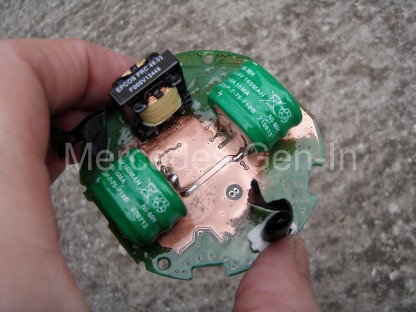 Clamp the assembled sounder/siren unit in a vice gently until the silicone/epoxy as hardened. Then for good measure, although really not necessary, tape around the seam joint with insulation tape making a tight secondary water resistant seal. 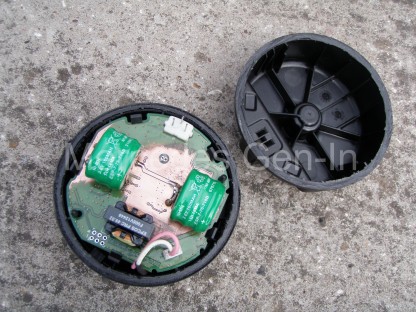 You can now refit the rebuilt unit to the car and test your work, either it will work perfectly or your time has been wasted!  If successful then you have saved yourself  a wedge of money, if it does not work then you have wasted £15 and can just leave it disconnected or go out and buy a new one – the choice is yours!

Hopefully all will be well and your Mercedes will once again have a fully functional alarm.