I recently was sent a question with regard the hearing of a fan noise/running in the cabin of the Mercedes Vito W639 when everything is turned off. This noise is often mistaken as the ventilation fan (blower) running, even though the fan position switch is at the off position.

Here is the original question:

Message:
HI, I recently purchased a 2008 vito W639 111 and when I start the
engine the heater fan is also on, even thou the fan switch is in the
off position.
Have you heard of this on any other vans and is there a remedy that I
can do to fix this issue.

Here is my reply:

I can only assume that what you are hearing is:
There is a small fan (like a computer fan) that operates under the control of the ECU that cools the large plastic fuse/ECU box under the bonnet, this obviously has a mechanical connection to the area behind the dash on the passenger side. As this fan ages it becomes more a little more noisy and can sound like the cabin air fan is spinning on low RPMs. It also runs when the ignition is on and engine not running and continues for a controlled period after the engine is stopped, you can force it to stop by turning the ignition on and off a second time.  There is also a small fan that cools the rear of the radio (similar thing), this is on the inside right of the radio cage within the dash if you were to remove the radio.  This one gets really noisy with age !
So nothing to worry about unless the cabin air circulation fan is actually running!, which I think you may well be mistaken about.
Hope this helps, if not just email back with a little more detail. 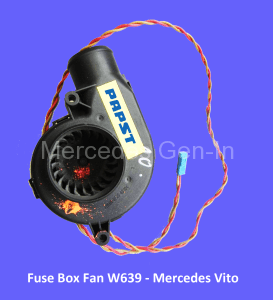 A further note –
Just as a point of note the fuse box/ECU cooling fan is at the bottom of the plastic fuse box housing in the engine bay (picture above) and once its bearings get a little worn the box aids to amplify the noisy fan motion and it appears quite loud in the cabin area, often mistaken as the cabin ventilation fan running.