This has to be one of the most simple and worthwhile jobs you can do.  Since I purchased the SL over Christmas I have run around with the hard top on.  About three weeks ago when we had that first little burst of nice weather I stored the hardtop in the back of one of the Storage Units and have run with the rag top ever since. 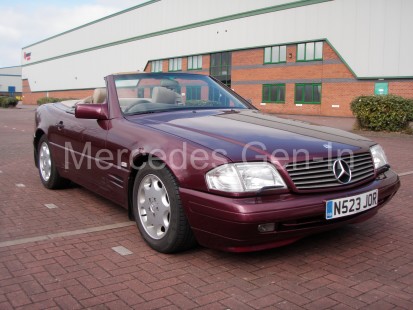 I kind of imagined that in the 20 years since the car was manufactured, the roof has never seen any attention for waterproofing.  This was based on the fact that water just soaked into the material and left it looking like a drenched wash leather!  Even though it remained water tight throughout, I decided it was about time to proof the mohair fabric. 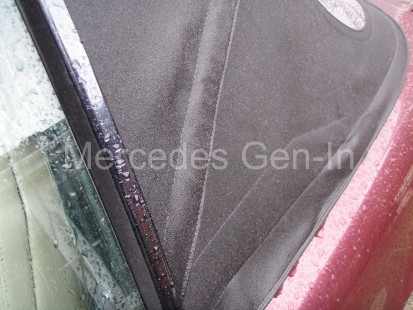 I researched a few products and what came out top was Grangers Fabsil in a can.  Other stuff looked to be a little messy and in many cases was an aerosol spray (I didn’t fancy masking off and dealing with overspray on the paintwork) so I opted for a brush-on product.  Fabsil is a silicone based ‘clear liquid’ that is free flowing and dries very quickly without any residue.  In fact, even in instances where I was a little careless with the brush it wiped off the paint without issue and left no marking what so ever.  Even the brush you used will dry out overnight and not harden – this was the product for me!  eBay Link to the Fabsil product in 2.5L Can – Here. 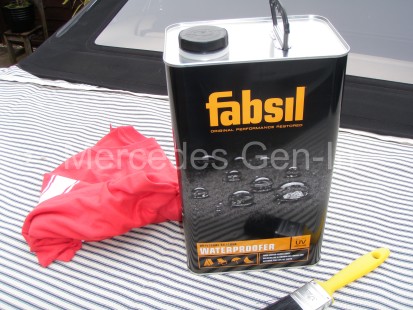 There is a little in the way of preparation to do if you want to do a good job, but I suppose the proofer would work equally well if you just slapped it on – it really is that easy!

I dry brushed the whole roof down to remove any debris and rain ‘wash-down dirt’ that collects in the lip and edge rolls, for this I used a stiff nylon bristle nail brush and worked with the grain.  Once this was completed and all other marks removed and brushed out, vacuuming the complete roof area proved to be fantastic at removing and collecting up all the loosened debris. 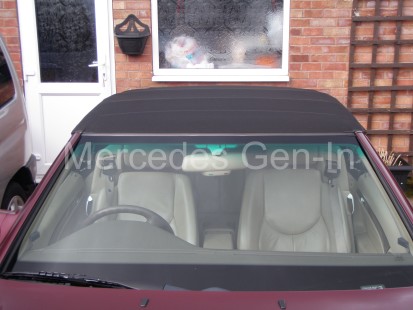 Obviously pick a dry day and one that looks like being so for at least three to four hours. Blanket off the windscreen (don’t fancy silicone smears!!) and the boot lid area, tucking the protective cloth under the rear roof lip. 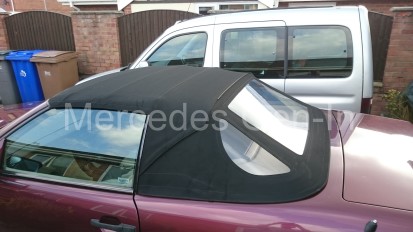 Use an old sandwich box to decant a decent amount of Fabsil and obtain a new or ‘ultra-clean’ 2 inch brush.  As far a quantities used goes, I gave my roof a generous coating, twice, and I used a little under half a gallon of Fabsil.  I have seen this sold in half gallon cans, but my shop only had the larger gallon can, that was in my case, far cheaper than buying its equivalent volume in one litre tins! – Plus once in stock, in the future I can proof anytime I care too !

I read several painful reviews of people brushing on the proofer once in one direction of weave then the second coat the other way.  I personally went for the ‘flood and soak’ approach, to the point where the material was soddened with Fabsil – making any weave brushing just a total waste of time!  It worked perfectly.  There advantage of this method is that by keeping a wet edge to your work with the brush, you don’t get any brush marks whatsoever, and the agent ‘wicks’ into the most hard to get places.  Painting around the windows is a cinch!  Just get to within a couple of millimetres from the seam edge with a loaded brush and let capillary action do the rest. Easy… 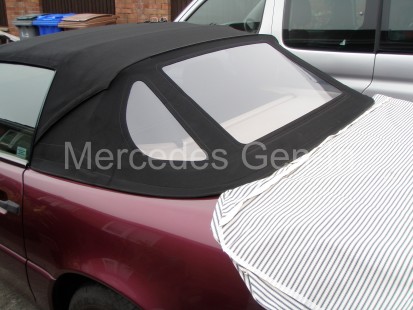 After the first coat you will notice how the colour of your your roof darkens to a beautiful ‘as-new’ black.  As Mohair ages and gets an ingrained surface dirt coating from the elements of our poor weather, it tends to go a dark charcoal grey and it really does look fantastic once the proofer has dried and it returns to its ‘as-new’ black finish.  The second coat goes on much the same as the first, taking about four hours to dry totally. 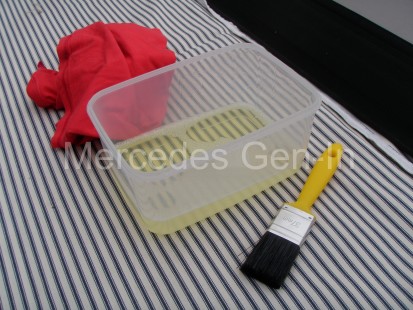 Some of the reviews I have read, beef about the smell involved in using Fabsil. I have found this really, to be honest, unfounded and if you ventilate the car well and let it dry properly, I must say I can’t understand why it is worthy of comment.  It smells slightly like ‘turpentine’, which I suppose is the products base solvent.

Great Job and well worth the effort (not that much effort required) – Its child’s play! 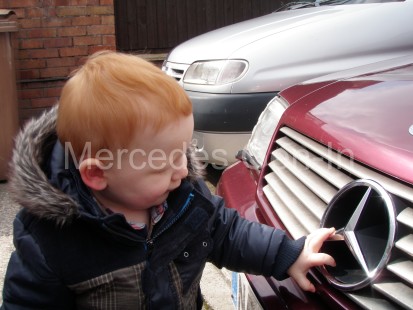 I shall report back once I get chance to take a few photographs in rain, so far we have a couple of ‘dewey’ nights and the water droplets sit on top of the fabric – we have not had that before! 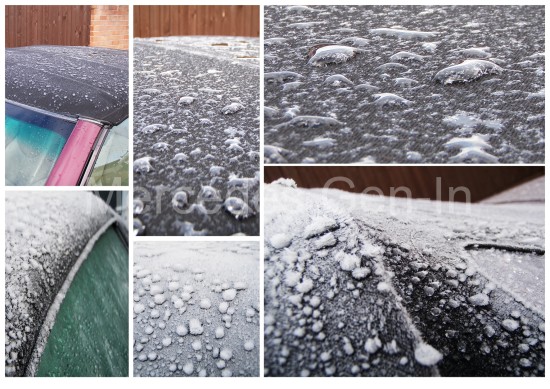