Over the past few months we had several bouts of severe frost and sustained bitter cold temperatures, the E Class Mercedes had stood outside unused for the majority of this time as I used the Vito for work.  As the weather improved slightly over Christmas we decided to go on a family shopping trip to Matlock.

I filled the washer bottle along with checking the oil and tyre pressures and off we set. Within 10 miles the ‘Low washer fluid’ warning lit on the dash and a little later the screen washers stopped functioning – empty!.  As it rained for the rest of the day, and the day after that, I was unable to look at the problem but suspected the washer bottle may have split due to freezing.

New Year’s day arrived, the weather in the morning although cold gave perfect opportunity to investigate. I filled the 5l  reservoir, marked its level with a pencil and waited….. sure enough the level began to drop but inspection proved the bottle to be sound and no water leakage was obvious – although it was disappearing at an alarming rate!  I removed the smaller concentrate bottle – the one that contains the undiluted ‘intensive wash additive’ as MB call it for the headlamp washer circuit.  Mistakenly this front fluid reserve is incorrectly understood by some owners to provide water to the headlamp washer circuit separate to the screen circuit, this is not the case – main water is drawn for the headlamp washer system from the main 5l reserve through a moulded mixing chamber in the bottle.  In this mixing chamber as water passes at high pressure, it draws a metered quantity of concentrated cleaner from the forward bottle (gravity feed), the cocktail is then propelled to the pop out headlamp jets.

After some torch shining and listening for dripping, the leak was located in the engine compartment on the driver’s side front below the headlamp assembly. I checked the pipe work and all seemed sound with no leaks and further squinting revealed that the water was in fact dripping from the body of the telescopic headlamp spray assembly. Where exactly was this leaking?  It was dripping from the rear of the main body of the jet assembly. Water was running backwards from the head, down the inclined jet and appearing beneath it at the rear, discharging into the engine bay lower tray.

You can see the rear of the jet assembly and the water supply hose indicated here by the red arrow.  The supply hose is easily removed from the assembly by presing the quick-connector inward (at the arrow tip on the photo) whilst pulling the pipe off the spigot.  At this point the remaining contents of the washer bottle will discharge from the pipe… watch your boots!

The next step is to remove the assembly completely for inspection, repair or replacement. 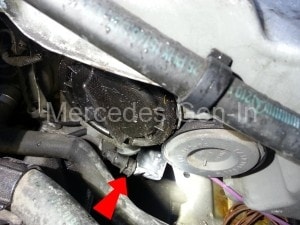 Take a small, thin, flat blade screwdriver and carefully insert it behind the sprung cover flap and open it up – this will reveal the jet assembly that telescopes outward under water pressure when the wash is activated.  Normally this flap is automatically opened against spring pressure when the extending jet rod pushes it open when operated. 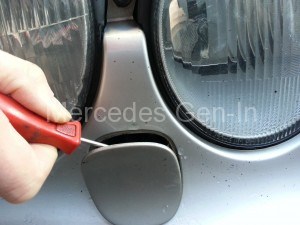 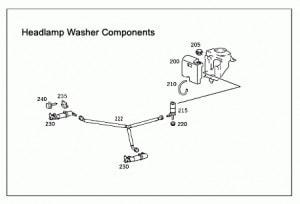 Removal from this point is fairly straight forward.  There is only a single cross head screw holding the assembly in situ.  Once the screw is out, this will then allow the withdrawal of the complete unit through the front of the vehicle via the held open flap.  Once removed and the unit emptied of water, you will be able to pull out the piston to its full extent whilst grasping the main body, then cover the supply spigot with your thumb and allow it to spring back under its own pressure – once it has, it will internally pressurise the unit allowing it to be submerged in a bowl of clean water and look for leaks in the form of air bubbles.   On my unit the leak was at the end of the extending portion (Green arrow B on the photograph).   The part where the extending rod joins with the twin-head jet.  On the final photograph the jet assembly can be seen pulled and extended whilst in place on the car. (Grasped and pulled in the direction of white arrow C)  Obviously removal of the following component parts is best done with the whole jet assembly removed from the car, although I suppose it would not be impossible to do whilst it is still installed.  The jet head can then be carefully removed by holding up the small plastic tang that forms the locking arm of a ratchet – this can be seen arrowed and numbered as A in the following pic.  Once the plastic ratchet arm is held up with a small jewellers screwdriver, the jet head can be pulled out of the end of the extending rod.  Once removed, the rod will no doubt spring back into the body! – don’t worry about this, it can still be reassembled with ease. 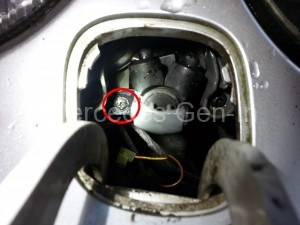 Once the spray head is removed it can be seen to be sealed to the body with a small purple rubber O-ring. It was this that had an accumulated build up of muck and grime preventing a perfect seal with the inner barrel of the extending main body obviously allowing water to pass by. Once cleaned, re-seated and bedded in the smallest bead of silicone sealer (I did not have a replacement O-ring of the correct size) The jet head was then pushed home into the main body, inserted to butt hard up against its plasic grey ‘end skid’ clip that prevents further travel inward into the end of the telescopic cylinder. Once attatched the complete unit can be tested then refitted into the bumper in the same manner it was removed.

Tested as a complete success, this simple fix was worthy of posting – Have fun ! 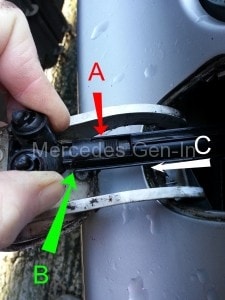