The issue with the Mercedes steering damper across many of the model ranges is that it is often ignored and as such goes unnoticed, until either a new owner takes up ownership or it is noticed by someone ‘in the know’ who recognises that it is no longer doing its job.

It is in reality a shock-absorber for the steering, it applies a linear damping force to the connecting steering tie bar (the rod/bars that tie left to right wheels together that is moved by the steering box)  One end is attached to the tie bar and the other to the chassis.  Forces are acted upon by the gas/oil filled damper against a fixed point on the chassis.  Physically the unit looks just like a small shock absorber/damper, the type of which you would normally see on a rear wheel suspension setup for instance. 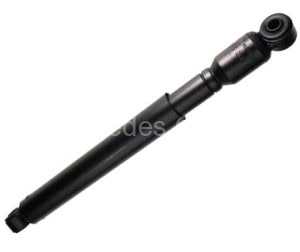 The symptoms can be varied but often manifest themselves as an uncontrolled gentle wobble at slow speed over uneven ground.  A good example of this would be – if waiting to turn right on a crosshatch marked section of road, trickling along, moving very slowly at nothing more than a ‘snail’s-pace’ in a straight line.  The front of the car will often appear to rock from side to side slightly and this motion is often undetectable in the steering wheel. (The nature of steering box and relay link steering is not the most positive steering feel out there, compared of course to rack and pinion set-ups) 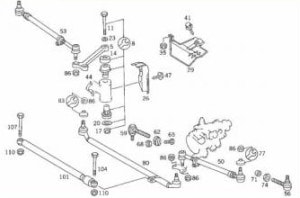 You may also notice some wandering at speed, although on the older E series, SL and 124 series this is more likely resulting from a combination of ‘saggy’ aged lower arm bushes in conjunction with a worn out and ineffective steering damper. 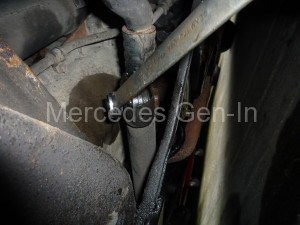 For the attributed low cost of this item and the relative ease in which it can be DIY fitted in a matter of minutes, it is hardly worth avoiding to change it – handling and ride can only be improved. 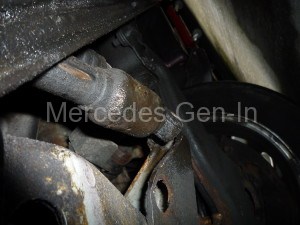 Raise a front corner of the vehicle to a reasonable height to allow unrestricted movement beneath. Remove the plastic under-belly cover to improve visibility and overall access.  Look towards the rear of the engine, about where the gearbox mates to the block and just beneath you will see the steering tie bar. Connected to this and running parallel, you will identify the steering damper, one end attached to the rod, the other to the chassis.  Using a 17mm spanner above the chassis fixing point on the left hand side of the vehicle (from looking at the front) ‘back’ the through-pin and with a 17mm socket ratchet, undo and withdraw the nut and pin.  The attachment to the tie bar end is also 17mm but has a captive nut at its lower point.  A combination spanner will make light work of the nut. Once undone, remove the captive square section nut from the eye.  You may have to apply a little left hand lock to the steering to enable the pin to clear the underbody bracing struts.  The steering damper can now be removed and replaced with a new unit. Refit the damper locating pins and nuts then replace the plastic under tray. Lower vehicle to the ground and test out your new and improved steering ! 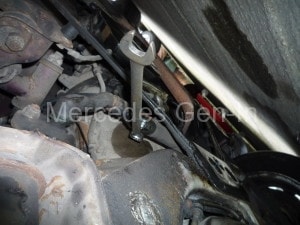 The cost of the steering damper unit is around £30 for a pattern part from GSF and it will take around 20 minutes to complete give or take a tad, to change it.  Time well spent.  I have yet to remove one of these dampers that has not been faulty as they often forgotten because they are hidden away and all but a few people are aware they exist.

View the video clip above showing a worn steering damper – when the gas/oil escapes over time, seals fail etc the damper becomes generally worthless and ineffective. This particular one is totally gone with as you can see no damping action at all.  Also when it was fully extended the rod grated and scraped – One place for this damper, (the bin)  and doubly certain that in this condition it shouldn’t remain fitted to any car!