For a few days now one of the Sprinter fleet had been failing to start due to what was obviously a starter engagement issue. You would turn the key and most times it would start as normal, then without warning, usually at the most inconvenient of times, it would just whirr and not engage with the flywheel ring gear. Repeated turning of the key eventually cajoled the engine into starting.

We had a replacement used starter motor on the shelf, taken off a defunct engine broken for parts – this was going to be fitted.

The replacement of the starter motor is quite straight forward and quick to do. If you are reasonably slim and dextrous it can just about be done in an emergency at the roadside without jacking the vehicle, for ease it is better to raise the left hand front corner of the van eight or so inches to aid access. 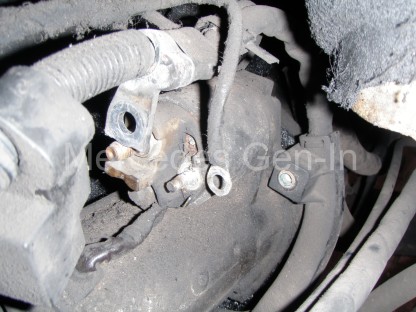 Start by disconnecting the battery and then removing the single reverse torx pin that holds the plastic cable conduit that is bolted above the starter motor. An 8mm hexagon socket will do the trick here if you don’t have the correct torx tool to hand. Disconnect the solenoid lead from the connection stud at the rear of the actuator (solenoid) of the starter motor (10mm spanner). Pull back the black plastic moulded protection sheath covering the battery supply lead nut and remove this too. (13mm spanner) pulling both cables free out of the way of the starter.

Climb underneath the left front of the vehicle behind the front wheel and look up to the bell housing, in the area where the twin gear cable assembly mounts. Here you will see two reverse torx fixings that extend through the gearbox bell housing casting into the faceplate of the starter motor. A short extension bar is essential to negotiate the bowden selector cables up top of the gearbox. The upper fixing is almost out of sight and you may benefit from placing the socket onto the bolt first before attaching the extension and ratchet. Undo the top pin fully and remove it. Extend a hand up in front of the cross member and support the rear of the starter and begin to undo the lower, more accessible torx bolt fixing. Once sufficiently loose, jiggling the starter slightly will assist you to remove the remainder of the lower pin by hand. 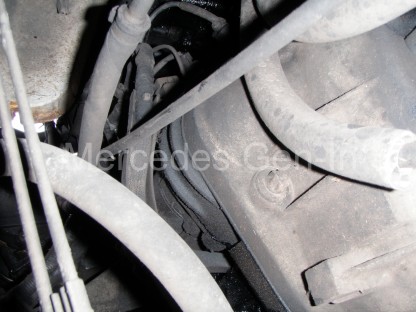 From inside the engine bay, extract the starter motor upwards, being careful not to damage any cables as you go.

While the starter is out of the vehicle, inspect the teeth of the ring gear through the open aperture, for wear/damage. If everything is in order, set about fitting the replacement starter motor as an exact reversal of removal. 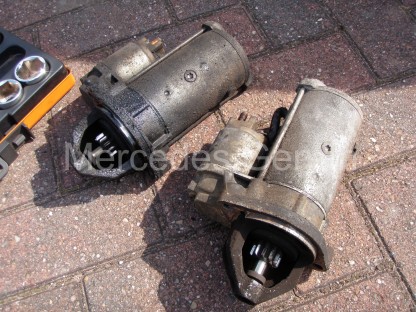 Often what happens with the starter motor itself is the shaft on which the starter gear slides when actuated by the solenoid gets oil contamination on it, this in turn attracts grit and debris that causes it not to push fully forward and fully engage when activated. All the moving components of a starter motor are un-lubricated and any signs of oil generally spells trouble. We can see this one is oil contaminated from an engine oil leak of some kind over time. Obviously there are many other faults, including electrical and mechanical ones, that can occur inside the motor unit. Often these can be rectified by further dismantling and bench repair or by entrusting the services of a competent auto-electric rebuilder. 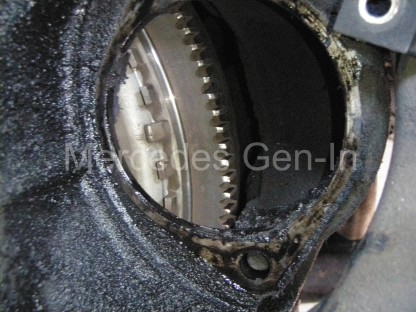