Having read all the horror stories regarding Mercedes Vito gearbox problems I was intent of getting to the bottom of this problem as all I had read on the internet about ‘suggestion A’ and ‘suggestion B’ etc. all seemed contradictory and to be honest there was little to substantiate any of the writing.

The problem I had, as do many it seems – is that from a standing start, engine running, first gear is hard to select, and on some occasions requires some extreme force to shift the lever into position 1. The get-a-round was to lift the clutch in neutral and re-depress to try and align the box somehow to allow this selection but this only sometimes worked. To be honest it makes driving in town a real chore. Add to that a poor second gear selection, almost like a worn synchro issues from my old banger days – I was beginning to worry!

‘Check the gear selector cable adjustments’ seems everyone’s first comment, (Gear Selector cable adjustment details here) however my view was that if you could easily select all gears when stationary with the engine off this is not a plausible reason for the issue. Secondly it is often reported on the internet that ‘ Vito gearboxes suffer from synchro wear on second and third gear. I found this, although possible hard to swallow as the same manual gearbox is used in similar guises in other MB makes that do not report a problem – how could this be? Maybe Mercedes vans are abused by their drivers who always crash change through the box for the speediest getaway. One owner driver / vans with dealer history show the same problems on the forums so an appallingly weak gearbox? I don’t think so…

The gear selector arm that is mounted to the gearbox does wear on high mile/use vehicles, but the resultant is second gear and reverse cannot be selected – even when the engine is off!  If you wish to check this fault out – look for play in the pivot bushing as indicated on the photo below and rectify this first. 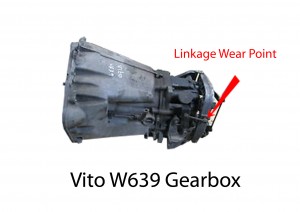 So what is it….?  What causes this problem? ‘The clutch dragging’ is a popular comment, ‘gearbox input splines sticking on the friction plate’ – again discounted by me as the clutch functions fine with no drag, judder or other malaise people seem too quick to associate to problems with the dual-mass flywheel set up.

Concluding that a small cross section of people have had isolated problems of differing types and reported them via forums etc, everyone reads into them as being the definitive cure and then becomes somewhat of a ‘shade tree’ expert to coin an Americanism – Re-reporting exactly what they have read and not really understanding the true nature of the OP’s problem from all perspectives.

I focussed on the oil in the transmission as my saviour and as it turns out – it was a great call! Selecting the alternative gearbox oil has totally eradicated the issues mentioned at the beginning of this post and the van has been transformed into a vehicle that is a pleasure to drive once more. This may not work for you depending on the exact nature of your gearbox issue, but if you are living with the same set of problems I had then its well worth the small investment before following other pathways (all of which are mostly inordinately expensive!).

Mercedes Benz specifies a very expensive synthetic single grade manual gearbox oil of SAE 75w. It took my main dealer a few tries to even establish this fact so it’s not common knowledge. It is supplied as MB part number 0019892603/11 or you can get a single grade 75w Synthetic alternative from Titan as Titan Sintofluid. (For information purposes it may be useful to know the Vito differential hypoid oil is a SAE 75w-85w synthetic – Alternate supply for this would be Titan Sintopoid.)

What I wanted was to use a slightly thinner performance oil, one that would allow more adequate slowing of the gear train on an up-shift, allowing the synchros to do their job with more ease. Thicker oil would tend to drag the gears round and make the synchros work harder to mesh a faster spinning gear set. When you are choosing a weight of oil it is interesting to know that gear oils have a different ‘W’ rating from those used in engine only applications. For example a gear oil of 75w -90 is almost the same viscosity as a 10w-40 engine oil ! Armed with this information I began my research…

I required a performance synthetic gear oil of less than 75w – ATF was the way forward. Synthetic ATF has a w rating around the w50 / w60 mark on the gearbox scale so fitted the requirement perfectly. The only downside (if there is one!) is that its grade performance peeled off ever so slightly lower in sustained operating temperatures than a fully fledged hypoid synthetic oil. Due to the fact this is not a racing car, its operating in the UK where average ambient rarely squeaks above 10 degrees C and the Vito is rarely fully loaded pulling a max weight trailer at 80 mph down an Autobahn! I choose to ignore this paper spec detail. Just as I chose to accept that the vehicle was now out of warranty and that from a MB dealer warranty point of view it didn’t really matter anymore – apart from the important fact it was time the driving experience was improved and that I technically understood what I needed to regarding the protection offered by the oil I was about to use vs. my driving style and vehicle use.

On this footing I proceeded to choose my oil. It was to be a Synthetic ATF sold by GSF Car parts. They sell it as ATF-U.  You will need the best part of  two x 1L bottles. 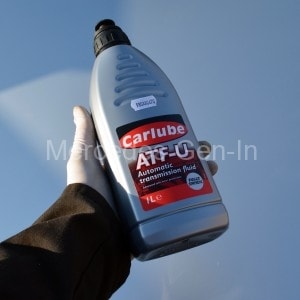 Installation was straight forward taking no longer than half an hour to complete the process. 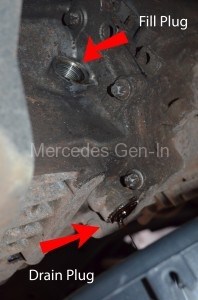 Jack up the Vito on the front driver side jacking point enough to crawl underneath easily. Remove both the fill and drain plugs using the correct Hex tools (GSF or any good motor factor / tool shop sell these cheaply in a set similar to this – before you buy make sure it contains the required 17mm tool as some kits do not) Note the drain plug is a larger hex tool than the fill plug and a pair of the correct tools will be needed. Remove the fill plug completely, then place a bucket beneath the drain and remove that plug. Let the oil drain for a few minutes to empty the contents as best you can. While draining take the opportunity to clean the magnetic drain plug of metallic bits, it will have a quantity of iron filings on it – don’t worry they all look like this and that’s what it is designed to do ! 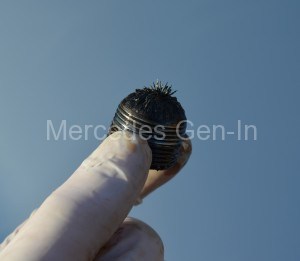 Once cleaned refit – don’t over tighten either plugs as they are a tapered thread and overzealous tightening could crack the gear casing. Fill with the chosen oil until it dribbles from the fill plug. At this point the level  is correct and refit the fill plug. Clean up any mess and lower the vehicle and road test. I had a look at the deposits in the old gear oil at the bottom of the bucket and found there was only the slightest traces of brass/bronze flecks, a very good sign – as past experience tells that if it looks like a ‘gold panners bowl’ there’s trouble ahead !. Heavy deposits of bronze particles is a good indication you most probably have some heavy synchro wear and maybe an oil swap will not cure your problem.

On the road test I noticed immediately the poor selection to first issue had completely gone and the first to second up-shift was near perfect. What a difference this has made in continued driving and in my opinion is a very worthwhile result considering the research I had put in. Perhaps I now changed the oil as part of my service regime instead of the almost ‘leave-in for life’ recommendation for the standard lubricant. I hope this modification helps you out as much as it helped me.  Whats to lose?  It may even work for you…