No under bumper lamps and the dashboard bulb failiure indicator pointed to the fact there was an issue with the fog lamp bulbs on the E Class W210.  When the weather improved enough to investigate I had a peek at the problem.  As you may know, access to the lower fog lamps rear casing is very restricted without raising the car on a jack, this was the reason I had not tackled the problem until it had at least stopped snowing! 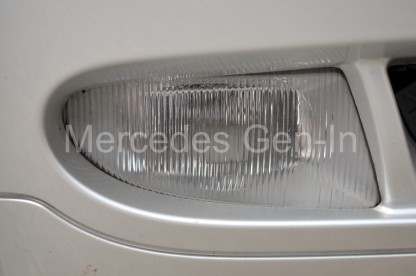 Both lamps had failed, but not blown filaments!

A small hinge-down flap, forward of the front wheels in the plastic under-skirt  is undone by slotting a 50p coin into and rotating the catches (two on each flap), once open this gives access to the rear of the fog lamps.  The lamp housing is opened by releasing the single plastic catch at the bottom of the assembly and levering the rear lid outwards then down – out of two locating slots on its top edge.  There is a standard spring-arm retainer holding the H1 lamp in place, once released the bulb can be withdrawn and the single spade electrical connector removed.  Replacement is a reversal of the removal. 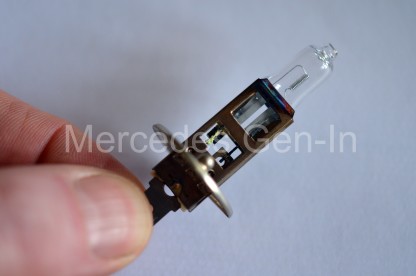 The bulb itself was in perfect condition, but the welded connection between the filament and holder body had corroded causing an open circuit.

On removal and inspection the interesting thing that I noticed was the bulbs themselves had not ‘blown’ their filaments, but had corroded in an identified weak spot on the filament connection where it joins to the fabricated steel holder. The fact that this was common to both left and right lamps with the same corrosion, pointed towards a possible issue with the termination welds on Philips H1 type bulbs.  If you look at the photograph below you will see a yellow sulfurous corrosion that has eaten through and separated the spot weld that attaches the filament wire to the metal support (earth) body of the H1 lamp.  When it was cleaned away with a sharp pointed knife it could be seen that the corrosion had totally separated the once welded filament wire from the support post creating an open circuit. 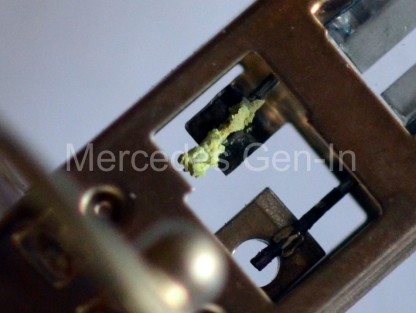 Corrosion had allowed the filament tail spot-weld to part from the lamp holder body.

As this had happened in an identical way on both bulbs I suspect a manufacturing fault or a selection of dissimilar metals that have some galvanic action causing this corrosion.  Either way it was the failiure of the lamp bulb construction rather than the filament that caused the open circuit in both cases.  I replaced my lamps with Osram H1 bulbs which have a better more robust filament connection arrangement and will now use this manufacturer in preference to Philips !  Make your own mind up ! 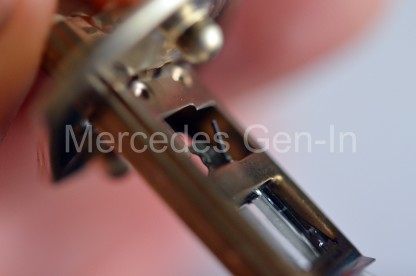 Corrosion has caused the separation of the terminal and filament.