A Mercedes 4 cylinder Luton body vehicle came to me with a turbo boost problem.  The owner complained that when driving it felt like it had lost all the boost.  On gentle acceleration it was drivable, but under any real load it did not produce any power to speak of and smoked from the exhaust.  The history of the vehicle was that this fault had been occurring for a month or two prior to the turbo failing catastrophically on the motorway.

I checked all the hose work and intercooler for problems with leaks or splits and nothing obvious was found.  A shiny new turbo was present under the bonnet (hood) and looked to be functioning correctly.  The vane actuating lever was moving under engine load and all looked well with the vac control valve, vac supply pipes etc.

A quick read of the ECU with the code reader showed that there was a low boost fault code stored (no surprise there!)  Selecting the live data view on the code reader revealed an atmospheric pressure of 990 mb and a boost pressure of 1010 mb at idle, on a test drive under load the boost produced did not rise above 1150 mb (absolute) , sure enough no boost but why?  I made sure the % on/off signal to the actuator was calling for full boost at this point on live data just to confirm it was not being told by the ECU to apply this amount of low boost.

I had previously mentioned the vacuum lines that feed the turbo boost controller were good and the feed line to the actuator itself was perfect.

As normal, once started, the lever of the turbo vane actuator dropped just as it should to charge position at idle.  I moved the actuator by hand and noticed that although the lever was pulling down under vac, it was not pulling fully down, there was a good 6-8mm of travel left in the lever at its maximum actuated position, though it could be pushed down yet further to its ‘mechanical stop’ with a screwdriver.

My first thought was: there was not enough vac available to fully actuate the turbo – not the case.  Was the turbo boost actuator valve faulty? – not the case. Vacuum actuator diaphragm holed or leaking – no as it held perfect vacuum. 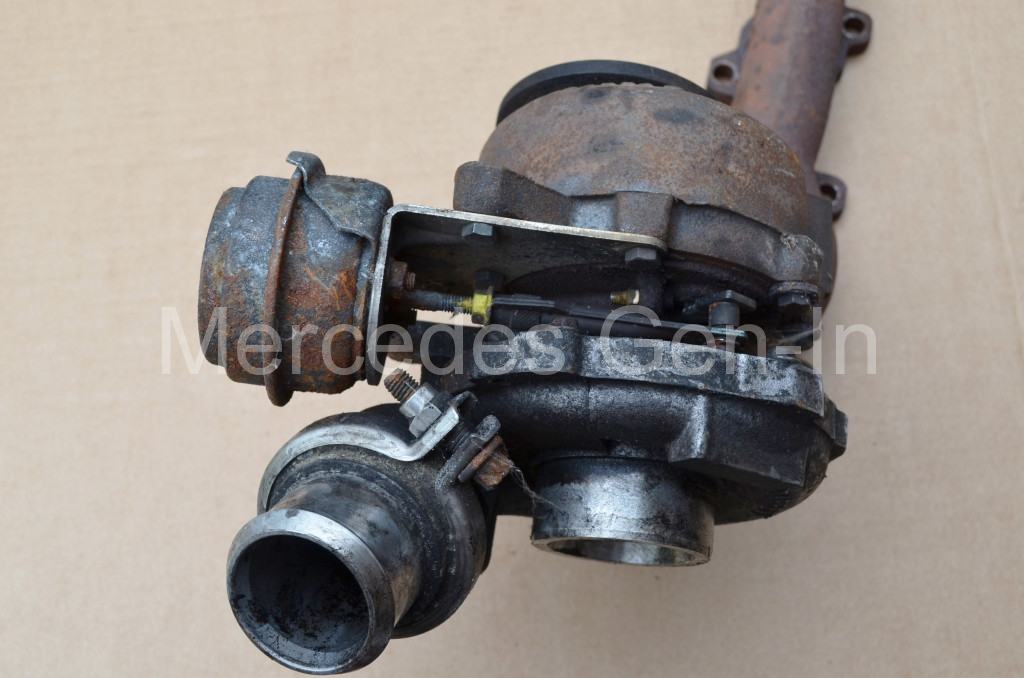 Undo the lock nut on the actuator rod (yellow painted here) to the right of this is a knurled adjusting wheel. Adjust to set the required rod lenght (Until a full vac condition holds the vane lever to its maximum on the mechanical stop)

After a while it occurred to me that the reason the vane lever on the turbo was not being pulled down enough was the fact the turbo actuator was at the end of its mechanical stroke.  Removing the small circlip on the actuator rod eye and removing it from the turbo vane lever I was able to adjust the length of the arm. This was done by slackening the 10mm lock nut on the rod and screwing the knurled adjuster, shortening the rod length. This allowed the rod to now pull the lever fully down onto its mechanical stop under full vacuum stroke.  The small circlip was replaced and road tests carried out.

We had now regained the lost boost, the van pulled like a train in all gears. Success!  Since the van had recently had a new turbo fitted, obviously no adjustment had been carried out to the actuator stroke, it was just swapped over from the old turbo to the new one.  After correct adjustments, road tests proved max boost was in the normal range (2447 mb absolute / 21 psi) and expected performance restored. I suppose the moral of the story here is never assume that just changing the turbo without correctly setting up the controlling actuator stroke, will work out of the box.

I hope you find this cautionary tale informative and it may just draw your attention to this issue should it ever pass your way. NB. The reason the fault was noticed before the turbo blew and was replaced with the new unit was because: The old turbo was failing and could not produce useable boost – Same issue and symptoms (no/little boost}, just different totally different causes!