A long wheelbase 4 cylinder Mercedes Sprinter (2004) some years back had ABS problems and the ABS pump was bypassed at the time due to the unavailability of parts and dealer cost of a new replacement unit. The Sprinter ran for many years, each time passing the annual MOT with no ABS function without problem – until the recent changes to the MOT test. The new revised regulations for the MOT test stipulate that if the vehicle has ABS fitted it must function correctly – at least with regard to correct function and sequence of ABS warning lamps on the dash. 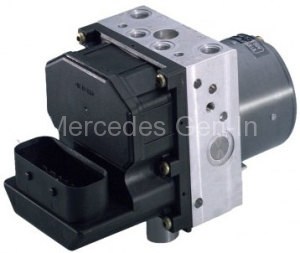 The owner had been told by the MOT inspector that if the ABS system was totally removed from the vehicle it would not be subject to test inspection. He was advised to remove the faulty ABS pump and remove all wheel sensors and wiring. Once this was done a pass certificate would be issued. Pump and sensor wiring was cut back, sensors chiselled off and the new MOT certificate obtained. One problem – no speedo function and Limp home actuation in higher gears (3rd upward)

I had the van to sort out as it was basically un-drivable and did not have a functioning speedo/odo.

The Mercedes Sprinter (ABS model) takes the road speed signal from the front left ABS wheel sensor.  Once this wheel speed signal is restored and the ABS pump module reinstated (this self contained unit contains the ABS control electronics) the speedo will function as normal.  The wheel speed data pulse will be signalled to the ABS controller then data sent via CAN BUS to the Engine ECU and speedo unit.  Road speed will be once more indicated and the ECU will have its required speed input allowing the engine electronics to operate correctly throughout the speed range. 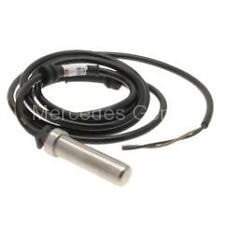 Once these few but critical components are refitted, (although the ABS was not or would never be functional in the above case) normal service is restored.  It may also be noted that if you have a Sprinter with fitted and functioning ABS – If you ever get an ABS warning light in conjunction with a loss of speedo reading, it will most certainly be the left hand side front (when sitting in the drivers seat) wheel sensor, its wiring or reluctor (tone wheel) ring  that is faulty.

A special note from the owner of the vehicle – Always take what MOT tester’s instruct you to do with ‘a pinch of salt’ as they most likely don’t know anything about the intricacies of Mercedes Benz models or their control systems.  This turned out to be quite costly advice that was given freely. The moral of the story is: If you are unsure, ask some one who actually knows!  🙂