Sean, a fellow Gen-In follower who lives in France wrote to me with some detail of how he managed to change over the headlamp units in his Mercedes Benz Vito (W639) 2008 model from UK right hand drive beam pattern to units designed for EU left hand drive.  He did this so that the UK imported vehicle could be registered in France and comply with their local MOT test.  This is called the ‘contrôle technique’  (CT) it is an obligatory vehicle inspection that must be undertaken every two years once the vehicle reaches 4 years old from new. 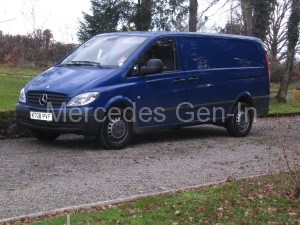 Sean started by locating some pattern lighting units from a supplier in Poland, these were substantially cheaper than original OEM units from Mercedes Benz.  There was a few quality issues but nothing that prevented the installation being an economic success.  The issues were that the plastic mounting tags that protrude from the lamp were not moulded of the best plastic and sadly due to the way in which the items were boxed for shipping from the manufacturer one was damaged. 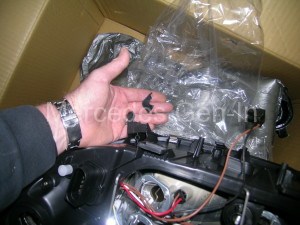 The broken mounting tag was repaired with a small plate fixed with self tapping screws into the lamp body.  ”I took my time doing the repair, using some thin steel from a broken PC hard drive cover, making a sandwich for the broken one of 2 steel between plastic, secured with self tapper and 2 part epoxy. I also added an extra plate to the other lower bracket just in case. The mounts all have a round moulded plug hole, much like a fixing hole, at the base of the mount-these were ideal for using to fix the metal plate(s) to the mount using a large self tapper.” 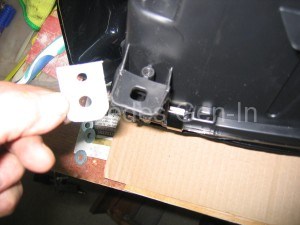 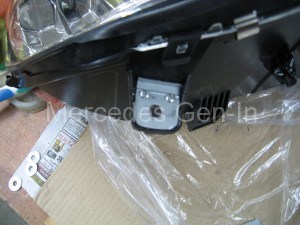 With the new lamps repaired he was able to carry on with the swap.  On the Vito W639 the complete front bumper cover has to be removed, whilst this is quite a simple task  it looks far more scary than it really is.  Start by removing the grille and then the bumper fixing screws behind, then remove the fixings from the lower edge lip of the bumper underneath the oil cooler area.  You will encounter both self tapping screws and a plastic ‘top hat’ type of expanding fixing, these if carefully removed can be re-used. There are more fixings inside the wheel arches.  ”There is some nasty cheapo plastic screws things that expand in a ‘top hat’ arrangement that hold the front bumper to the underskirt.  There is a plastic hanger/support on each side below the innermost headlamp line at the bottom of the bumper this is a fixing point too (Big self tappers).  (You will find the outside temp sensor here under the RHS too, clipped into this hanger)  These are on the bottom edge.  I think once these and the other fixings are off the bumper should pull away without hassle.” 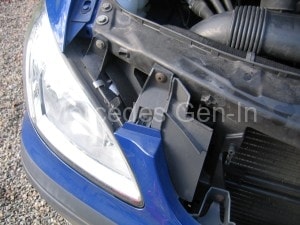 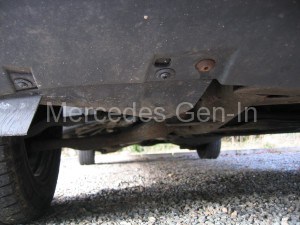 ”The weather was ok this am so I got started, it all went ok, thanks to your pointing out the problems-the top hat plastic plugs hung up the bumper, the side screws behind the arches were hard (for me) to find, and the worst was removing the plugs for the H/L wiring-they did not want to come off.”  Careful levering with a screwdriver will eventually work the loom connector plugs off the rear of the lamps. 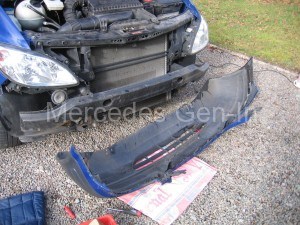 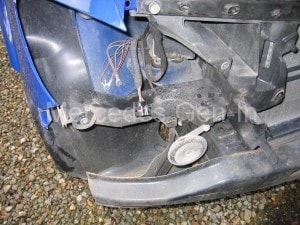 Once the bumper and old lamp units were removed the job was pretty straight forward to fit the new lamps and rebuild the front of the vehicle as it was before.  Its a good opportunity while the bumper is off, to jet blast any dead flies from the Intercooler as it is rare to get this kind of access.  ” I’ll certainly clean off the intercooler and will see if I can locate the horn while there, so that I can note where I can mount a louder replacement, when I can get to the UK and go to a breakers, hopefully in a couple of weeks.”  The other issue with the pattern headlamps apart from the broken mounting tag was a dimensional difference with the headlamp leveller actuator arm.  Fortunately there was enough adjustment to maintain the correct lamp level.  ” I plan to put the H/Ls back on tomorrow if the weather allows, and have to set up the alignment, assuming the lights all work as they should. The motor mounting was difficult, as the ball joint was very difficult to locate-it was 5-6mm longer than the original part,  but by locating the beam aim screw above the motor and adjusting this, I was able to get enough slack in the system for the ball to move smoothly.”  Vito W639 Headlamp Alignment Information. 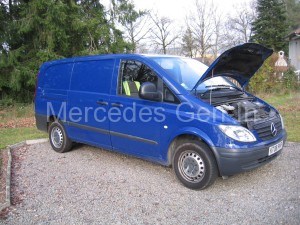 Keep watch on the Mercedes Gen In for future posts as Sean has identified a few other areas that need improvement/repair to his Vito and thanks to his great photos and tips, with his help we will no doubt be covering some of the other bits and pieces as he gets round to fixing them!