This post is published with great thanks to Chris Horton.

It explains the best UK source of parts to replace damaged CV boots on the Mercedes Vito W638 chassis. 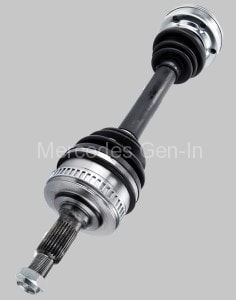 Annoying, because although I can’t at this moment remember which of the two complete drive shafts I replaced, it’s not so long since at least one of them was brand-new (albeit after-market rather than genuine Mercedes). And I have a feeling that I replaced one of the
remaining outer joints at roughly the same time. That, too, would have been an after-market item.

Because of that, and because as far as I know both splits are relatively recent – and also to save money, of course – I decided to try to buy and fit new covers, rather than new CV joints (which obviously come with covers). I know that I will still have to remove the shafts and separate the joints, but I hate throwing away perfectly serviceable components.

First port of call, as usual, was the Euro Car Parts website, but this shows a boot kit only for the outer joint, at £15.30 including VAT.
Checking with my local ECP branch confirmed that for some reason they don’t do a similar boot kit for the inner joint – just a complete joint at around £70. (Or £53.40 online, apparently – but still more than I was prepared to pay.)

Next stop was my local Mercedes main dealer. Yes, they could do me a boot kit alone for the inner CV joint, but that too would cost about £70 – so there was clearly little point in going down that route. (I didn’t bother asking how much a complete joint would be. More than the value of the van, almost certainly.)

Let’s try Halfords, then. Nothing in stock, unsurprisingly, but the helpful chap on the parts counter made a rather protracted phone call, presumably to their central parts department, and eventually established that he could get hold of a boot kit for the inner CV joint. The price would be £12.66 including VAT. Would tomorrow be OK? Yes, absolutely! 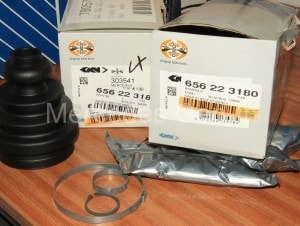 As is my habit in these situations, I ordered two. If one inner cover has split, then it probably won’t be too long before the other one does the same, and I don’t want to have to go through this rigmarole again if I can avoid it.

As promised, Halfords rang me the following day to say that the parts had arrived, so off I went to collect them. Imagine my surprise when, back in the van to drive home, I looked more closely at the (Löbro) boxes, and saw that they appeared to have come from none other than Euro Car Parts. They certainly have that company’s familiar logo on them. 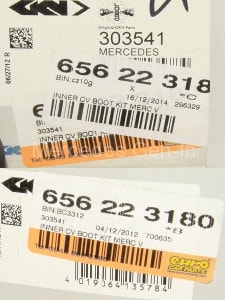 Whether this will aid anyone else in a similar situation I don’t know. It depends on whether you have a helpful Halfords nearby, I guess or a branch of Euro Car Parts with staff prepared to do a bit of digging for you. Either way, the ECP part number is 656223180, with what looks like 00058 tacked on by Halfords.