This will not be a lengthy post as turbo’s are covered in many other areas of this site, but I did think it would be useful to show with a few images of what the symptoms of a blown turbo look like and to back it up with a little additional text. 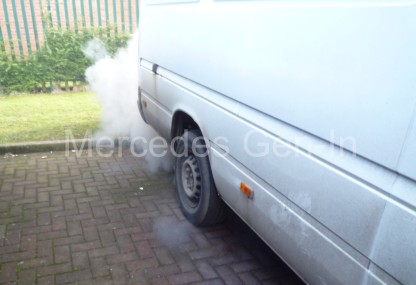 Depending on the level of failure, the following symptoms will show themselves. Huge amounts of billowing white smoke from burning oil within the exhaust system due to failed turbo seals.  (engine oil is pushed at high pressure past the turbo seals directly into the exhaust system and intake tract) This smoke in the early stages of failure may appear as a slight ‘whisping’ of white exhaust output, usually coinciding with some oil marking or dotting on the rear doors, almost like someone has flicked oil from a brush.  These are the first indicators that all is not well.  You may notice a higher than normal oil consumption and possibly a louder than normal ‘spooling’ noise from the turbo itself, maybe even a metallic ticking, increasing with engine load.  It goes without saying that there will most probably be some power loss and even an engine management lamp illumination / limp home situation. 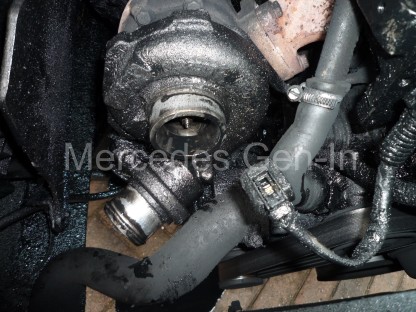 When the turbo does fail completely, it does so in a number of ways.  The two main types of failure are fairly major, being either catastrophic and non-catastrophic.  The former is where the bearings collapse completley on the turbo and send metal parts directly into the engine sump, usually finding that during this, all the engine oil dumps almost immediately into the intake tract and exhaust, so fast that unless the engine is halted immediately, irreparable damage is caused by oil starvation to big ends and mains.  Good night engine…

The more preferable (If that is possible!) and latter type of failure, is where the indications of turbo trouble give fair warning and are immediately heeded by an informed owner driver, thus preventing certain engine damage, caught at least before the engine oil pressure warning lamp illuminates!  White smoke – stop the van and check oil level – immediatley, if dangerously low arrange for vehicle recovery and turbo replacement.  You may just be lucky… and be able to at least minimise the damage caused. 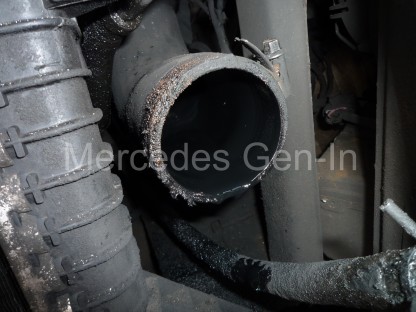 Often when the turbo fails it dumps huge quantities of engine oil into the intake tract in a very short time – starving the engine of its oil pressure and life blood!

The majority of turbo fails are due in the most to oil starvation (the main cause – turbo bearing seal failure) that prevents a suitable cooling lubrication path to the high speed rotating spindle which in turn rapidly disintegrates the internal bronze bearings due to heat, causing very rapid spindle seizure and enevitable destruction. 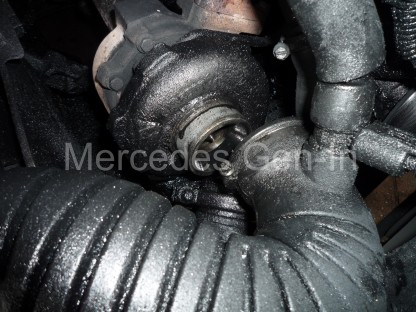 If you suspect in any way that you may have turbo issues STOP the engine and check it out, as to continue running the power unit could easily cost you a complete engine and not just a turbo repair on the Mercedes Sprinter / Vito diesel engines (Including those derivatives utilised in Mercedes passenger cars.)  You have been politely reminded!