It has been reported on many occasion by others that if a Mercedes Sprinter has been standing for many months then often the power steering pump fails on recommissioning. While unusual, I have seen this once but more common pump failures are those caused by internal seal or valve problems, due simply to good old ‘wear and tear’. 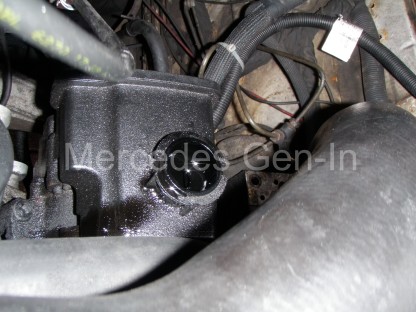 If your steering has gone heavy or assistance is non-existent then the likelihood of pump failure is high. A simple test to check if the pump is at least moving fluid is to start the engine and look into the power steering fluid reserve through the filler cap while someone turns the steering very gently. If there is no movement of fluid at all in here, the pump seals have either failed or the bypass has stuck fully open – neither which are recoverable circumstances for even the most accomplished mechanic. Replacement is the only way forward.

When you looked into the reserve, if there was obvious fluid movement then there is an outside chance that a seal in the steering rack could be causing your issue, often however you would be able to hear the passage of high pressure fluid in the lines with no accompanying assistance if this were the case. If the system is silent while it is running and been called into action by moving the steering wheel, then the highest probability is a failed PAS pump!

To replace the pump on a pre 2006 Mercedes Sprinter is a reasonably straight forward task. First raise the bonnet and remove the intake combustion air turbo hose from the manifold, releasing its other end just below the coolant header tank. Place this out of the way, visually checking it for splits and damage as a precaution while you have the item off the van. Now release the coolant cap a quarter a turn to depressurise the system (usual caution applies if the engine is hot) then remove the small bore coolant return hose from the top of the header tank. To identify this hose it goes to a forward facing spigot on the thermostat housing. Tuck this hose out of the working area. 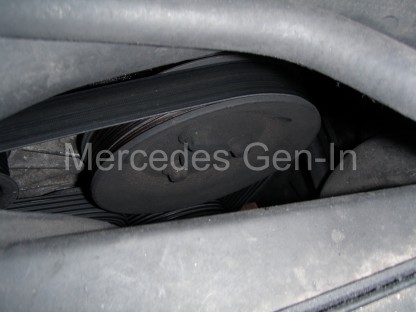 Slacken the three reverse torx pins that secure the power steering pulley to the pump flange. Once these are loose select a 17mm ring spanner or multi-point socket and bar, slip this over the serpentine belt adjuster and crank it to release the tension on the belt and slip it off the PAS pulley. Let the belt fall just out of the way of the PAS pulley, but if possible do not allow it to completely unthread itself from its route from around all the pulleys, as it makes reassembly a little more complex and time consuming. Finish off by removing the ribbed pulley from the pump flange. 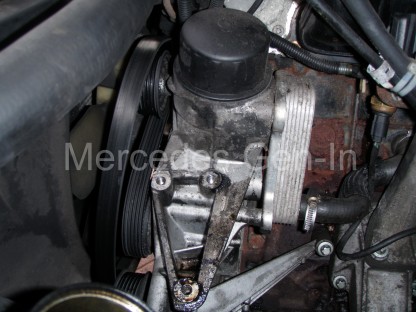 Place a cloth or sheet of plastic underneath the front working area of the van as some oil spillage will occur when the hydraulic connections are removed. Using an 18mm spanner or union wrench, undo the pump output hose from the forward edge of the housing, loosen the hose clamp from the fluid low pressure return pipe at the rear bottom corner of the reserve. Remove the high pressure hose and cover its end with a plastic bag or cloth to prevent dirt entering. Tuck it out of the way – up high if possible to prevent draining. Looking down onto the pump body you should now be able to see three reverse torx fixing bolts through the pump body casting, two on the left and a single one to the right of the pump fluid reserve. Slacken and remove these bolts leaving one remaining at finger tightness on its last few threads. Now swiftly pull off the return pipe and slip your finger over the end of the open spigot on the fluid reserve. While blocking and preventing the oil from running out of the pump with your finger, undo the final fixing pin and lift the pump out of the engine bay. The pump can either be drained immediately or placed in such a way that it can be emptied later. 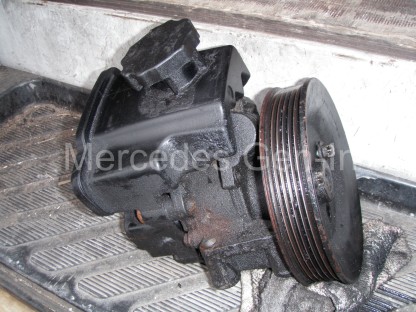 It goes without saying, do not re-use any of the old power steering fluid in the hydraulic circuit or pump reserve – always use new.

Refitting is the reversal of removal, being sure to route the serpentine belt correctly on rebuilding the unit. Dependant on the failure mode it may be prudent to do the following (Thanks to Dennis Linden for the advice) In most PAS systems the filtration occurs on the return and debris is trapped inside the filter contained within the reservoir.  If you replace a component like a pump and the reservoir assy as in the Sprinter, it is recommended to initially leave the return pipe off.  Start the engine and direct the loose hose into a catch bucket. Now with an assistant continually filling “the pot” with fluid , turn the steering slowly lock to lock twice with the axle raised on stands. This will purge out all the old fluid and/or contamination like metal particles from the lines and the steering gear into the bucket – not the into the new reservoir and filter!

After the vehicle has been built back up, top up the fluid reservoir to the upper mark on the level cap dipstick, re-fit the cap and start the van. Turn the steering from lock to lock a couple of times, then stop the engine, check for any leaks around the unions or pipework and recheck the fluid level – top up if necessary. Restart the van and work the steering from full lock to full opposite full lock, a few times until the system is completely bled of air and operates normally in relative silence. Recheck the tightness of the pulley bolts and clean off any oil spills from the area.

Congratulate yourself on a job well done! If you lost the serpentine belt route from the pulleys when you removed the pump – here is the belt route map.