While quite a large amount of free play in the steering column is allowed by the examiner on a current UK MOT test, usually free play here indicates wear that is due to the failing of the lower universal joints that direct motion from the steering wheel to the steering rack input shaft and is best avoided where possible. Incredibly although it may still be declared ‘within limits’ by the examiner, in reality it makes for tiring and sometimes eventful driving!

For the purpose of this article it is assumed that any ‘free play’ in your steering is not attributed to ball joint or steering rack/outer steering tie rod wear and that you have identified it in the steering column itself. 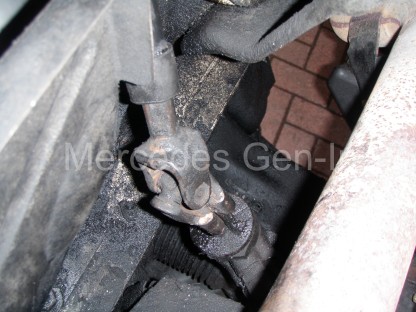 The steering column is quite basic in the T1N pre 2006 Sprinter models in that it is a straight shaft exiting through the floor beneath the pedals to a shorter flexible shaft that has two small universal joints (UJ) or couplings fitted to it. This allows rotational wheel movement to be directed to the steering rack which lies off to the side of the main column centre line. The upper UJ is well protected and shielded from the engine bay, living inside the cup of the steering column sleeve, screened from view as it enters the engine bay. The second joint is open to the elements and also extremes of heat from the nearby exhaust manifold and turbo unit, so often gets the worst of environmental conditions and temperature changes to cope with. Often it is this lower joint that begins to fail, bringing an element of rotational free play between any driver input to the steering rack itself. 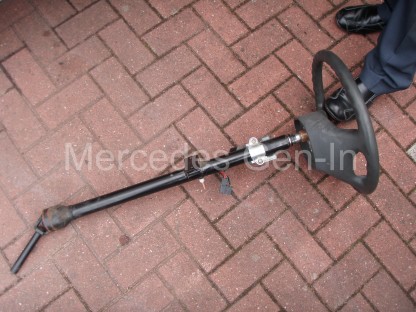 Mercedes in their wisdom make the steering column joints (UJ’s) ‘sealed for life’ and these are non-replaceable units – the cups are pressed and swaged into the supporting yokes. (not circlips as used on more conventional types of UJ) This means that often the only route open to the owner is to replace the complete column. 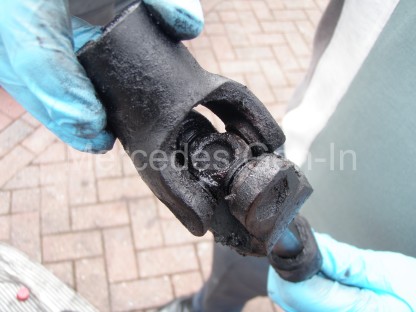 We were fortunate that we had broken a van only weeks earlier and had removed a known good steering column and saved it for spare parts. I had decided on this occasion to replace just the lower ‘telescoping section’ of the steering column as this was the only joint exhibiting wear, this in turn reduced the labour time slightly as there was no steering lock/ignition barrel swap to contend with when retaining the upper section of the original part. You may wish to replace the complete assembly, which is your choice – the method is pretty much the same except that you will have to remove the ignition lock barrel and refit it to the new part before assembly. It is also worth noting that the first thing to do before starting work to replace the whole assembly, would be to remove or at least loosen the steering wheel in situ.

The short-form job of replacing the lower column joint is as follows.

With wheels straight ahead, undo the single torx pinch bolt on the splined clamp to the top of the steering rack input shaft. Note the position of the gap in the clamp and how it aligns with the plastic ‘marker vane’ showing ‘dead ahead’ centre position. Spray some penetrant around the area as this spline joint is often bound with rust. Drive in a stout screwdriver or chisel/pry bar to open the joint clamp slightly to aid removal. 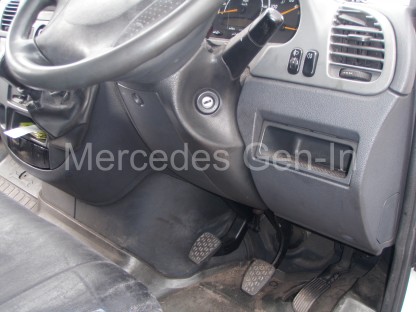 Once the upper and lower fixings of the fuse board are free, unplug the twin plug fuse board connector arrangement from the top of the column and lever it down off the lower stud.  Notice there is an earth connection wire and eyelet on the remaining lower fixing stud on the column sleeve.  Unhook and remove this too.  Unplug the right hand electrical plug from the back of the fuse board ( the one that goes to the back of the ignition switch).  Pull the fuse board across and down to the left leaving full access to the two 13mm steering column flange bolts. 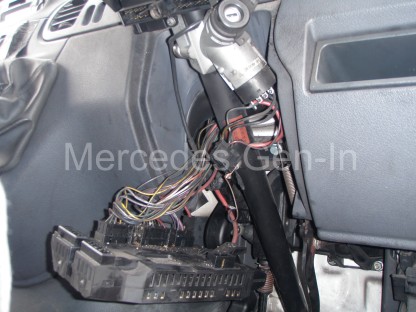 Undo both of these pins from their captive nuts on the under dash chassis near the pedal box, disconnecting the brake pedal return spring from the right hand side of the column flange mounting plate as you go.  Allow the steering column to gently arc downwards onto the seat, supporting it until the wheel rests securely on the seat bolster. 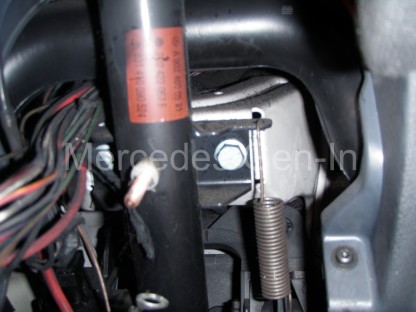 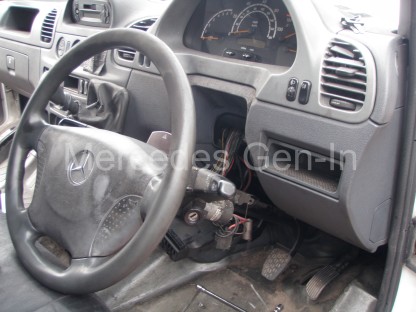 Jack the drivers side of the vehicle and get underneath with a long blunt drift and hammer.  Locate the drift directly under the splined joint on the steering rack input shaft and tap off the joint upwards.  Once the joint is free from the splines, articulate the end telescoping section behind the engine mount under the turbo.  Pull down the rubber end sleeve on the sliding lower section.  Pull out the extending lower shaft until it locks, insert a small screwdriver into the 6mm hole revealed in the upper tube section end when the rubber boot was removed, push this inward to unlatch.  This pushes in a clip that allows the rod to extend further out until eventually allowing it to be it fully removed from the tube section.  Be aware there are two spring ‘leaves’ (the part you press through the hole to release) the first to appear as you slide out the rod is the smaller one the second larger – these are to prevent column vibration in the sliding joint. 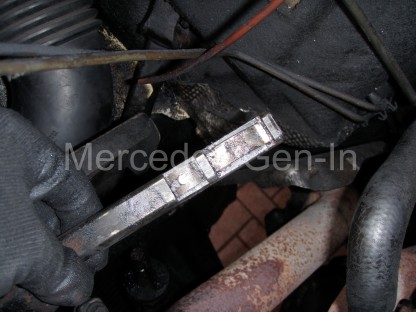 Once pulled out of the tubular section, the new or replacement part can be fitted and all the steering components built up as an exact reversal of removal. Be careful to align the splined joint exactly in the original position on the splined input shaft on the rack.  Rely on the plastic marker vane for this essentially accurate positioning.  If this is assembled incorrectly (a spline out) not only will the steering wheel be turned slightly when in a straight ahead position, but there is a high possibility that items that rely on the accurate referencing of the steering angle (ABS TCS ASR) etc will not work correctly unless the vehicle has a perfect straight ahead alignment of the steering wheel, rack and wheels.

Here is a short video showing the physical play/wear in the lower UJ coupling of the Sprinter steering column.