As many of you probably know oil seen in the header tank is often the sign of imminent head gasket failure. But before condemning any Mercedes CDI diesel engine to head gasket failure, especially if the vehicle is otherwise running well and not throwing out white smoke from the exhaust or maybe you would have expected to find some water in the oil, there is one place to check first.  The engine oil cooler. 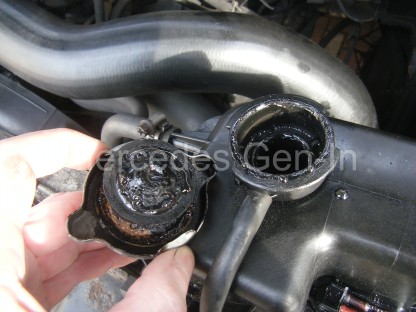 The engine oil cooler on Sprinter and other Mercedes CDI engines through the range of commercials and passenger cars is a pancake aluminium pressed fin block, that sits directly behind the oil filter housing on the right side of the engine looking in.  This heat exchanger has two sets of internal galleries, one for engine coolant and the other for engine oil.  This provides conductive cooling of the engine oil shifting its heat to the circulating cooling water system.  What happens is that the internal galleries corrode, usually due to lack of inhibitants in the antifreeze or the mix ratio simply being ‘to weak’ to prevent corrosion. Over time the internal galleries can perforate from one to the other and the resulting high pressure oil in the primary high pressure circuit moving through the oil filter, is forced into the water system and onward to the header tank if it finds an easier path through a pin hole or crack. 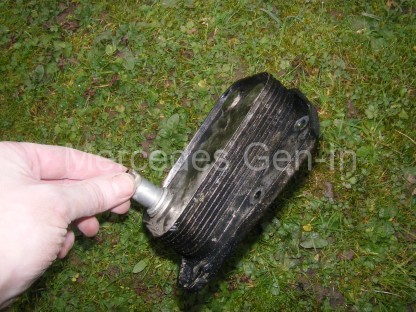 Depending on the severity of the leak, this can be anything from small trace amounts of oil appearing in the water or as in our case, huge oil migration.  So bad in fact that the driver first discovered that his oil light came on, later when he topped up the oil with over 4 litres it lasted for only 40 minutes of normal driving before the oil light illuminated once more!  When the vehicle came back to the yard we checked the water reserve and it was full to the brim with black ‘tar like’ oil emulsion, so bad that it was clogging the cooling system. 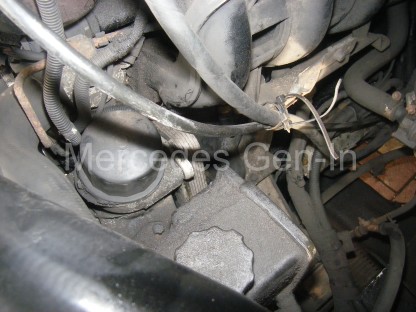 On removing the bottom hose from the radiator we drained the system of about 2 litres of oil, we removed about another 3 litres of tar from the expansion tank.  The van ran perfectly in every way except for the massive oil loss into the water system.  Rightly we suspected the culprit to be the oil cooler, as in our opinion, no head gasket failure would act in dumping these quantities of oil in this uncontrolled way.

To remove and replace the oil cooler first drain the coolant system (if you hadn’t already!) Then remove the top induction hose from the intercooler to the inlet manifold for access.  Undo the hose clip and remove the flexible water hose from the oil cooler and tuck it out of the way.  There are five reverse torx oil cooler bolts that are slightly awkward to access that hold the thicker pancake cooler’s back plate to the alloy oil filter casting. Once removed, the cooler can be pulled free, up and out of the engine bay. 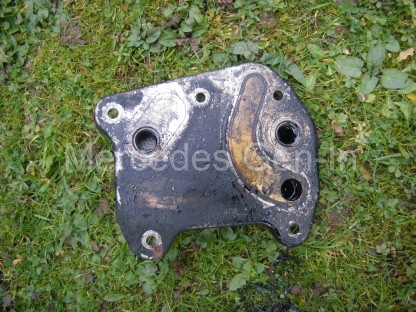 Often even if you block off and blow air into the water gallery (the cleanest port for your mouth!) of the suspect oil cooler, it is impossible to detect a leak of even the size we had, between oil and water ways. So if you suspect it – change it.  You will always need a new orange sealing gasket to face between the replacement oil cooler and oil filer housing.  It costs around £4.00 and an old gasket should never be fitted, as it rarely seals due to its complexity.  You will most probably need the use of a ‘shaving mirror’ to clean the recess and place the new gasket in its correct positional groove on the rear of the oil filter housing – even a spot of gasket sealer here and there, just to hold it vertically in place while you rebuild, may be required. 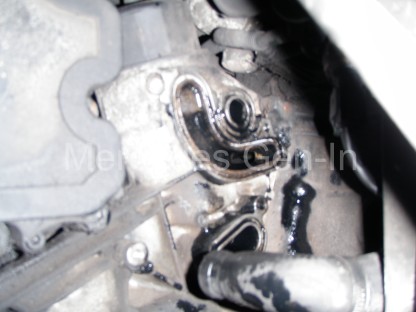 Lower the new plate cooler into position and carefully push it flat against the gasket on the filter housing, keeping pressure, ‘slide’ the plate to align the fixing holes and refit all the reverse torx holding pins.  Check with a torch that the gasket has not moved during the procedure by looking into the small air gap between the two mating parts, when you are sure all is well, tighten up the bolts. 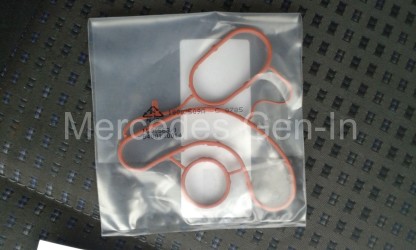 Refit the flexible coolant hose, put back the induction hose and refill the system with coolant.  Depending on how well you managed to flush the system of old oil, it will find its way into the coolant reserve for a number of weeks.  With a warm engine, squeeze the top hose rhythmically while scraping emerging oil residue from the top of the filler cap.  Keep topping up with water as you go, when you have removed as much of this black sludge as possible, refit the radiator cap and monitor the oil level over the next few days, de-oiling it again when you can.  Eventually it will clear, but it takes time and is dirty work.

Monitor the engine oil level over the next few days to make sure all is well.