We recently picked up a 2001 facelift Mercedes SLK200 from South Wales and on the way back to Staffordshire it was obvious all was not well with the driveline.  As soon as the vehicle started rolling at even the slowest speeds, there was a bearing noise usually associated with a gearbox problems.  It was present in all gears and became almost unnoticeable at about 60mph and above. It did not change note in any way if you dipped the clutch (This was a 6 speed manual model) or selected neutral whilst rolling.  The only characteristic to this noise was at slower speeds it was slightly lower in tone and when power was applied, even lightly, the noise lessened.  Immediately you had toed-off the power, the noise returned. There was no apparent vibration through the gearstick, although the noise did seem to be coming from the gearbox/transmission tunnel area and was quite loud at sub 35mph speeds.

While this type of noise and the issues connected are discussed in relation to a Mercedes SLK R170, it is probable that similar issues could exist on many models of vehicle not just Mercedes and not specifically just this model. 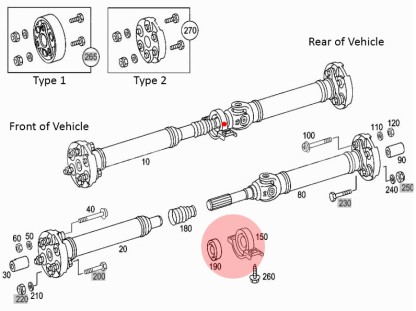 To inspect the propshaft centre bearing it will be necessary to lift the rear of the vehicle onto ramps. Once elevated crawl under the centre of the vehicle with a torch and inspect the centre bearing that you find approximately half way down the propshaft just before its sliding splines.  You should be looking for the prop to be central in the rubber bushing as it passes through. Any sign of sagging downward with the rubber at the bottom of the circular bearing housing, being either split or compressed is a sure sign of a tired support bearing.  Grasp the prop shaft and try and lift it against the supporting bearing, any easy movement here is also pretty indicative of a failing/failed unit.

There is another way of determining wear of the propshaft centre support bearing and that is to elevate one rear wheel and whilst the vehicle is in either park or first (manual box) rotate the wheel.  Get an assistant to look at the centre bearing with a torch. If it is seen to lift as the wheel is turned against the static gearbox the joint must be further inspected.

What actually happens is the propshaft sags in the centre, and on overrun it rotates out of line rather similar to a bent knee.  This induces vibration, this usually lessens when you apply power as the shaft will self-straighten under load and spin centrally once more, only to relax again to the ‘bent knee’ when you lift off the accelerator.  The grinding/whirring noise often heard as soon as you begin to move off, is simply the worn centre bearing race transmitting noise to the transmission tunnel and surrounding chassis through the support bracket. 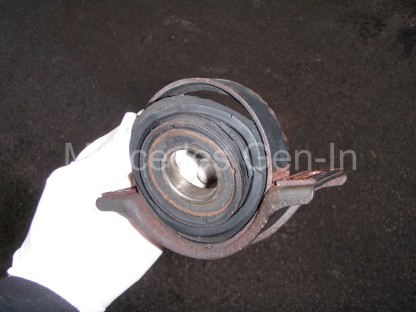 Turning attention to the ball bearing in the centre of the support, located just as the propshaft section passes through.  If you can see any signs of rusty powder or corrosion dryness this may indicate the races are failing and have become gritty, producing that rubbing worn bearing noise we spoke about earlier. 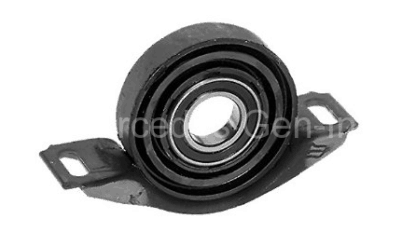 If you decide to replace the centre bearing it is quite a simple job on the SLK200 R170 and should take no longer than an hour start to finish, other models may involve the removal of some exhaust components to gain full access however assess the job before you start. Begin by undoing and removing the three 19mm nuts and pins that go through the differential input spyder that hold the rubber flex disc.  Now remove the forward rectangular protection plate that bridges the transmission tunnel by removing its four 13mm pins and washers.  Note the position of the captive support spring clip for the oxygen sensor connector, it is attached at the bottom left pin of the plate, if you were lying under the vehicle with your feet towards the front.

Now using tippex or other marking aid, mark off the position of the flex joint and diff input spyder. Pull back the rubber boot that protects the splines on the shaft just ahead of the support bearing, mark the shaft position in relation to the spline position so that on reassembly the two halves can fit together in the exact position as they were in before removal.  Positional marking is important as the propshaft is balanced as a complete unit and if it is assembled differently it could be unbalanced and induce other noise and vibration to the drive-line.

Now remove the two 13mm bolts on the centre bearing yolk.  Grasp the rear section of the prop and push it forward a couple of inches to clear the spigot on the diff input flange.  Once clear of this, the back end can be dropped and pulled free from the spline, withdrawing the complete rear section of shaft with centre bearing attached.  You may have to orientate the bearing to feed it past the exhaust, but in most cases it should not be necessary to remove/part the exhaust for removal of just the rear section.  On the SLK200 2001 facelift R170 you will not have to remove any exhaust component.

Once off the car hold the prop vertically and using a copper drift and stout hammer drive off the centre bearing, invert the propshaft and feed on the new support bearing in the same orientation as the old one was removed and tap it fully home using a similar drift, ensuring you only tap the inner race nearest the shaft to prevent damage.  Once fully seated, the propshaft can be refitted in the same way as removal. 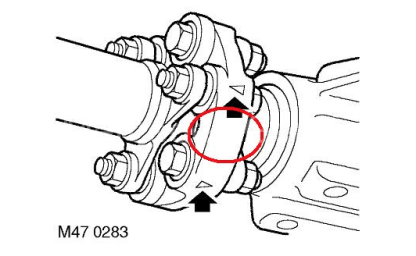 While you have the rear section of prop off the car, this is a great opportunity to inspect the condition of the rubber flex disc on the drive line.  You are looking for failure in the form of ‘C’ shaped cracks appearing around the bushes that allow fixing to the drive flanges.  Any problems here can be addressed by fitting new flex discs, obviously the front unit would be accessed by removal from the gearbox output shaft. It is more probable that the rear flex disc exhibits more wear than the front due to its position on the vehicle so use the rear disc as a visual indicator of what the front may be like, from this determine if further inspection is necessary.  When removing/replacing rubber flex discs it is important to note the moulded arrows on the rubber outer edge. These indicate the fixing bolt orientation with regard to where the nut of the through-fixing should be on reassembly – Arrow points to nut.