In a recent Mercedes Sprinter engine replacement (Used engine fitment) it was noticed at the time of purchase that there was an issue with No.2 Injector seal leaking. Obviously this needed attention and there was more chance of being able to remove the stuck injector once the engine was fitted, than try to do the work on the engine prior, as it would simply move around the floor with the physical effort involved!

What I did do before fitting the engine was to get rid of all the carbon ‘Black-Death’ build-up due to the leaking injector. This involved careful chipping and clearing the cables, connectors and pipes that were buried beneath the charcoal coating. If you want a really clean and sparking job, I can recommend a none-acidic oven cleaner for a final dressing, but in this case it was cleaned to a ‘practical degree’ that fitted with the age and condition of the vehicle. 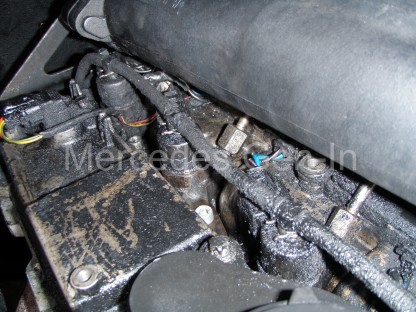 Without a doubt, if you are able to start the engine and get it warm, even loosen the clamp bolts five or so millimetres above the shoe clamp then rev the engine, what often happens is the injector gets ‘blown out’ a little under engine compression and once the carbon seal is initially broken, it can make subsequent extraction a great deal easier.  Sometimes it works – sometimes not!

In my case I knew that the engine would probably not start as the seals were in such bad condition. As I turned the engine over clockwise using a 27mm socket/breaker-bar on the crank nut, you could hear the escape of air past the injector seal on each rotation. This was confirmed by localised spraying of WD-40 onto the suspect injector and watching it bubble/vaporise as air from the combustion chamber was forced by the injector during a manual rotation of the engine. I had to proceed without heat or hot engine – always makes for interesting removal! 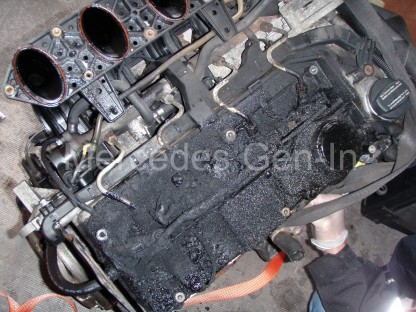 Obviously you will have to remove the inlet manifold upper half and also the engine cover if fitted before you can gain access to the injectors. It is important to plug all the intake tracts to prevent items such as the bleed off pipe spring clips finding their way down there etc…

Once the engine was fully installed, the injector power plug was removed, the bleed off return pipe unclipped and moved well out of the way. The steel diesel supply pipe and the injector union connection were removed with a 14mm spanner and 13mm socket respectively. As soon as the union was removed the hole was plugged with a small section of kitchen towel pushed into the tapped hole. This simply prevents any bits getting into the open hole while working to extract the injector.

Rarely it is possible to clamp a pair of good mole grips to the injector solenoid fixing nut and rotate the injector ten or twenty degrees back and forth to loosen it in its bore, more often it takes a great deal more work!  Using a searching penetrant or diesel itself is a good aid to getting things moving. This twisting method can be successful, though what usually happens once you start to get going is that the fixing nut undoes slightly and puts a stop to using that method of extraction, as it simply rotates upon the head of the injector body.

What you have to do in this eventuality is grip the injector just below the solenoid nut and attempt to move the cast head part – rotationally back and forth. As the diesel supply union is completely removed, you will get the maximum chance of realising this important few degrees of movement, that will in time result in the total removal of the injector body.

If you have a 24mm open end spanner or its imperial equivalent this is your key tool. If your area of work is the rear three injectors there is a little technique that may work for you. If you lay a 19mm combination spanner along the top of the duct that carries the injector wiring, interlocking the open end into the rear intake manifold support bracket, this will provide a sturdy supporting surface on which to lay the ‘operating’ slightly slack fitting, 24mm spanner onto whilst moving it back and forth. As you will probably only be able to shift the injector a few degrees back and forth at first, it is important to keep the area well irrigated with penetrant. As your movements get more dynamic, begin to press the back of the operating spanner down onto the 19mm rider. Keep pushing as you rotate back and forth. This induces a small lifting force under the solenoid nut from the 24mm spanner and as you move it, it will in time begin to raise the injector out from its bore. If your injector is at the forward end of the engine you will have to locate the 19mm ‘rider’ spanner’s open end somewhere up-front to fully enable this method, but it is not impossible! 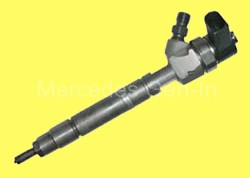 Eventually you will extract the injector – a feeling of achievement will appear as you take an inspection mirror and torch to peer into the blackness from where it came. If you were lucky then the copper washer/seal will have accompanied the injector out of the hole.  If not, a ‘rat-tail’ round file of suitable size, pushed into the hole will retrieve the seal without issue.

Now you can begin to inspect the seal itself, giving up many clues to the demise of its capability to hold pressure. Clean it with a rag and take a close look at its copper surfaces. If there are any scored lines, cuts or deep marking, this is the route the escaping combustion gasses have taken to ‘carbon-up’ your engine with ‘Black-Death’. Indeed any gas-cut passages in the sealing surfaces will have most certainly also cut into the aluminium injector seat and in severe cases damaged the steel injector face that mates with the copper seal.

I would recommend always at least cleaning the recessed seat of any removed injector with a special tool made for the job. This special tool is a flat face end-mill or reamer with the correct diameter sleeve to cut or reface the base surface with some precision. These tools are available from Laser for under £60 from most motor factors and are essential to DIY replacement and the successful re-sealing of injectors – experience has found in every case, if you don’t at the very least ‘lightly face’ and prepare the injector seat before reinstallation, you are not giving yourself the best chance of success, therefore I would get the proper tool for the job, period! 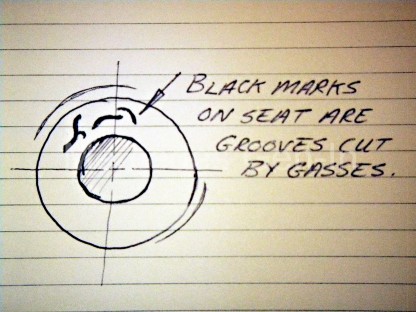 One or two rotations with the seating tool will be sufficient to enable you see if the seat is damaged in any way, using your inspection mirror and light. If there are any black marks on the seat (rather like worms!) as the drawings below show, then continue to use the seating tool, checking and wiping aluminium shavings as you progress to remove material. Eventually the tool will re-face the damaged seat to show a clean, uninterrupted ring of aluminium. It is possible if you do not fully rotate the tool when using it, mistakenly rotating the tool left to right rotationally, may cause the finished surface to have ‘chatter’ marks on it. This is surface unevenness that must be removed and is only achieved by turning the tool lightly and continually in one direction, stopping movement only as you simultainiously relieve pressure from the cutter. Inspect and clean often, to obtain the best surface finish possible. 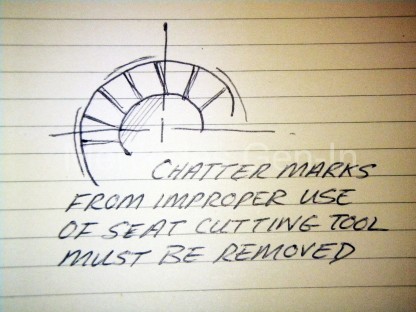 Improper use of the seating tool sometimes causes chattering on the surface of the seat. This needs to be smooth and not disrupted with tool marking

Now turn your attention to the face of the injector body that compresses against the copper seal. This must be free of any carbon build-up and ‘shiny clean’. You can take some fine emery paper and lightly work this surface until it is bright and continuously clean around its circumference. Now you are almost ready to reassemble!

The injector hold down bolts are a one-time-use, stretch to yield fastening, that must be new and unused on each replacement. Cut a short groove with a saw file to make a thread cleaner out of the old bolt and use this to freshen up the tapped hole for the clamp bolt. Use a thin screwdriver to clear the oily debris from the bottom of the hole as it often builds up here and can if not removed, be forcefully compressed into a plug, causing it to burst through into the cylinder head water jacket – take special care to clean this hole out!  If the thread is damaged in this deep tapped hole you have a number of repair options, these are covered briefly in this post. 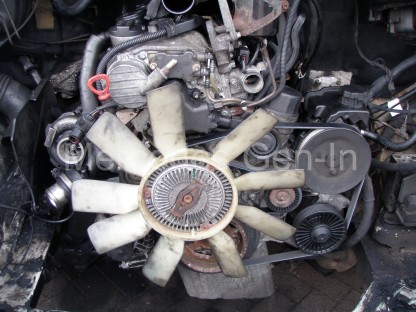 Now you can use ceramic grease to coat the outside of the injector body (not the tip or any mating/sealing surfaces) place a new preferred Honda Accord Diesel Seal onto the injector tip and carefully lower it into the clean and prepared hole. Do be sure to have one final check with torch and mirror to make doubly sure there is no debris left on the sealing surface before final assembly. Once the injector is fully inserted, with the fuel connection pointing to the fuel rail, add the clamp and loose-fit the clamp bolt to hold things in place. Now refit the fuel union to the injector, removing the tissue plug that has prevented dirt getting inside, then refit the steel fuel line from the injector union to the fuel rail, finger tightening the union nuts. Now torque the clamp hold down bolt to 7Nm plus 90 degrees (MB Specs say 90 plus 90 degrees after 7Nm, but actually the yield has occurred after the first 90 degrees and clamping force reached, so I see little point in risking further stressing an otherwise ‘spindly’ and fragile fixing). You may now refit the fuel bleed off pipework, electrical connector and tighten off the steel fuel line unions. Rebuilding your engine is now a reversal of dismantling. (remember to remove the manifold intake plug of rags or paper before fitting the upper section!)

There are a few tips here that hopefully will help you achieve this sometimes daunting job, but with care, patience, the right tools and a little effort this can easily be done by a DIY mechanic.