I decided to upgrade the lighting in the interior of the Mercedes SL (R129).  Previously I had modified the BA9S LED lamps in the dome light / map light and now wanted to tackle the footwell and puddle lamps (under door lighting). Link to dome light modification/LED fitment here.

The reason for the upgrade is that I like the reliability of LED’s over the T10 and festoon tungsten lamp styles.  The T10 often blackens almost to the point of no light being emitted and the festoon ‘end to end’ filament is not a robust design by any means, especially in applications that involve slamming doors and boot/trunk lids.  Apart from that the light emitted is more pleasing to me than the yellow light from older traditional lighting, but that is a matter of taste and may not be to everyones liking.

I will add that there are a lot of LED’s out there stating that they are ‘white’ when actually their output contains an element of the blue spectrum – this often causes problems at MOT or inspection time, as the testers seem to need to see a ‘pure white’ rather than one diluted with a blueish tinge – That gets the thumbs down under the – ‘No blue lights should be fitted to the vehicle’ rule.  In my view this is a little petty, given that in reality the emitted ever-so-slightly bluish light, is not even on the same page as ’emergency services blue’, but I suppose a law is a law.

While I was choosing suitable festoon LED’s to replace the existing tungsten filament lamps I came across some T10 push in LED replacement lamps.  These would be ideal for the sidelights up front in the headlamp unit, the ones I was looking at had built in SMD resistors to offset the lamp load so that they would not trigger the bulb failure dash warning lamp. 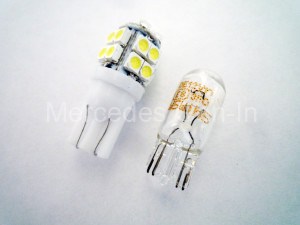 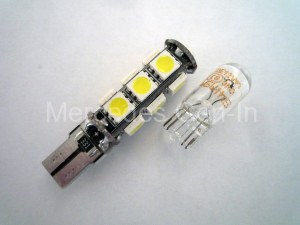 My chosen T10 sidelight replacement – what an amazing light output!

I had previously upgraded the side lighting on my Vito W639 and was going to use some spare LED lamps I had in the SL application.  The problem I had was the receptacle in the SL headlamp reflector was only just large enough to insert a glass T10 lamp (not surprisingly 10mm diameter)  The China T10 replacements I had in the drawer were a little oversize on the plastic moulding flange, and although I could probably have forced the holder and LED into the lamp housing, I did not fancy dismantling the headlight to remove an LED that had been pulled from its holder and had fallen inside, when or if I ever had to remove or change it! 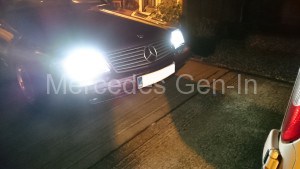 Almost as good as headlights ! – well you get the idea.

I ordered up the UK LED’s and within a couple of days they arrived.  Expecting similar performance to the Vito LED upgrade, I fitted the T10 replacements.  WOW.. These were just amazing.  Pure white and very, very bright with the added bonus that they fooled perfectly the SL’s bulb fail circuit.  I could not believe how good these lamps were.  Indeed they were almost as bright as daytime running lamps and at night the forward illumination from the two LED side lights was just staggering. (see photos) 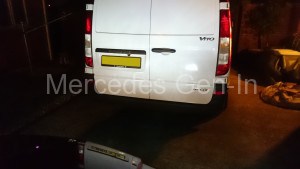 White light output with good intensity as can be seen here.

Within a few weeks, the delivery of my LED selection from China arrived.  Once the weather had improved sufficiently to allow me to open the doors of the car and work inside without getting drenched, I got to work to swap out the footwell and door card puddle lamps. 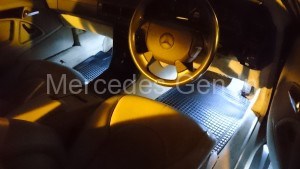 Pulling the lenses/holders was straight forward as was changing the tungsten festoon’s for the new LED units.  I was pleased with the results – again pure white and excellent illumination, now matching the dome lamp LED’s done previously. 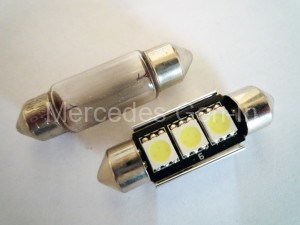 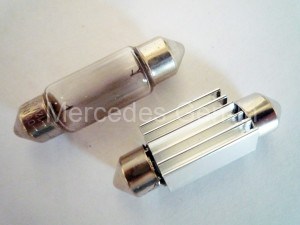 Heatsink for heat dissipation of the LED’s and built in resistor.

I fitted festoons with integrated resistors, not because they are covered by any lamp fail warning, but because I simply ordered a larger quantity of the lamps I needed for the number/reg plate lights.  The number plate lamps were also a breeze to change, unscrewing the stainless steel screws (2 per lens holder) and lowering the holders was as easy as swapping the bulbs and slotting the holders back in place.  These LED’s also worked brilliantly, they did not trigger any lamp failure and the light was nice and white (although I must admit – not as ‘piercing white’ as the front T10 LED side lights) Very pleased with the results indeed. 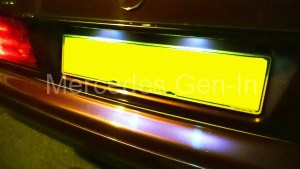 Good illumination and LED’s do not trigger lamp fail warning.

As you can see the quality of the LED’s both from China and the UK is very good, they look well made and built to last. So far 6 weeks and no problems – not that I expect to have any, because the Vito’s upgrade was done some 18 months ago and the LED’s are still going strong.

When time allows I have some dash and instrument lighting that is out and in need of attention, so that ones on the list!