When I first came across this problem I was worried that I had serious front suspension trouble, in fact it sounded so like there was some part of the wheel/tyre catching on a suspension component I used to stop and check my tyres were still inflated!  This problem only ever occurred when the car was cold and had been standing all day or overnight and never revealed itself when the car was warm.  It was noticed when applying a generous amount of steering lock either left or right, needed to negotiate an exit from a tight parking position.

This went on for weeks.  I researched what the issue could be and all that was written was: Worn lower arm bushes, top mount worn , play in ball joints… etc – to be honest enough horror reading material to scare the most ardent of owners!  But I was not convinced, as I could see nothing wrong with anything and all components were in good order with no play, back-lash or wear present.

I came by this totally by accident, it was a YouTube video posted by a chap with an almost new Porsche 991 – the noise and vibration effect was identical to what I was suffering on the Mercedes SL (R129)

Although my tyres were past there best, still more than legal but approaching time to change I was convinced this was tyre related. After some investigation and reading obscure posts and questioning seasoned performance mechanics it became apparent that this was not an uncommon problem. 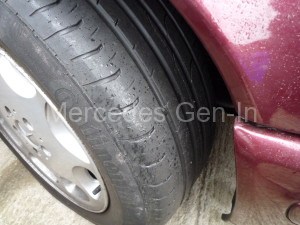 Continental Contact tyres – worn but with some life left

The scrubbing/rubbing noise seems to be more prevelent with Continental Contact 2/3 tyres and often accentuated if the tyre is starting to cup or feather on the edges. However it is not a product of a worn tyre or even an anomaly of a particular brand – it is due wholly to steering geometry angles and cold tyres!

From my reading on the subject some Porsche dealerships have offered an opinion to owners that this noise or juddering effect takes place more commonly below ambient temperatures of 40 degreed F or 4 degrees C (That is most of the time here in the UK!) Owners of Mercedes vehicles have reported exact noises and effects similar to that experienced by Porsche owners.

Having spoken to several mechanics and in particular to one industry expert on the subject his comments are worthy of note:

Hi Steve, now you come to mention it, I think I have noticed that happening in some of my cars – and especially the 2004 Passat when I’m using full lock to get out of my driveway. I also borrowed a Porsche Panamera last summer, and from memory that did it, too.

I think it’s because modern cars have such a tight ‘lock’ that when you turn the wheel fully in either direction at least one of the tyres – the inside one, I guess – is almost literally being pulled/pushed diagonally across the ground, rather than rolling as cleanly as it should. I’d imagine it would be worse when the tyres are cold – ie less supple and less grippy than when hot – but then again the ambient temperature when I had the Panam was pretty warm. Maybe that has less bearing than the angle they are operating at…

So there you have it, it is a little known phenomena occurring mostly with cold tyres, made worse in some instances by tyre choice, wear or age. You live and learn…. 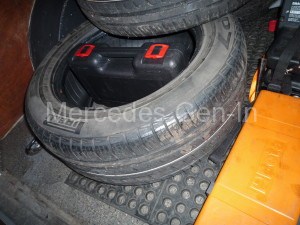