With the car idling in the street I went to close the gates and on my return noticed a growing pool of petrol beneath the car.  I opened up the yard again and parked the SL out of harms way until I could find time to have a closer look. 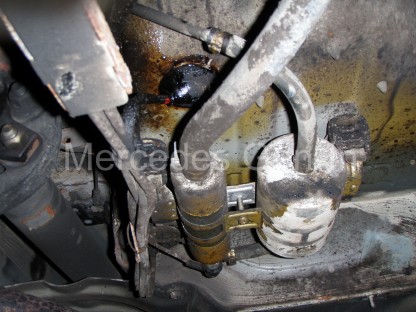 I was confident that it was a leak on the pressure side of the pump, as it only seemed to leak with the engine running, so it was safe to leave for a few days until time allowed.

The weather improved this week, so I lifted the car sufficiently to gain access to the fuel pump and filter assembly that lives under a plastic cover, just in front of the right hand rear wheel.  There are three plastic 10mm nuts holding the front edge and a single recessed nut high up on the trailing edge in a moulded extension of the cover.  Once these are removed the cover can be dropped to reveal the fuel pump and filter assembly. 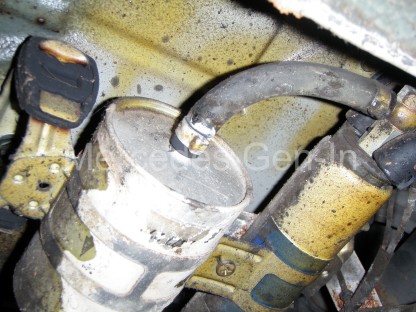 On some models there are twin pumps fitted in series, the output of one feeding the input of the next. This SL320 model has the elongated single high delivery pump.  The whole pump and filter assembly hangs on rubber bushes, rather like ‘miniature exhaust hanger rubbers’.  The thick rubber fuel supply pipe (about an inch diameter) delivering fuel from the tank, comes from the above the differential and swoops down over the drive shaft connecting to the rear of the pump. The output from the pump is smaller bore and connects in a short ‘U’ shaped flexible link pipe to the head of the fuel filter.  Filtered fuel exits the in-line filter through an eight inch length of 15mm flexible hose at the rear, connecting to a 10mm steel spigot on the fuel pipe that runs over the differential and to the front of the car on the left side. 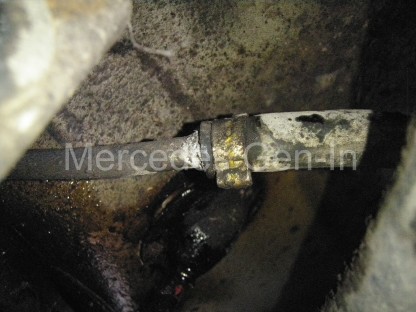 Everything looked dry and over the few days standing, there was no evidence of a fuel leak at all.  I started the engine and took a look at the pump section underneath with everything running. Dry as a bone!  For sure it was a monumental leak the other day and now it had totally disappeared.  I began poking and twisting the rubber hose connections and it was not long before I discovered the culprit.  As soon I touched the last section of rubber hose that joined the steel high pressure supply pipe, fuel sprayed out from the joint at a good rate of knots.

I immediately shut off the engine and inspected the pipe a little more closely.  The rubber and steel pipes were all in excellent condition not showing any signs of deterioration, but for a little surface muck, that when cleaned off left things looking as new.  The original hose clip on the joint was a factory ‘clic-clamp’ type, and the hose had deformed under its pressure over the years and become a relaxed fit on the steel pipe.  As the rubber pipe diameter was a little larger than my largest fuel line clamp I opted for a thin wall screw type line clip, that fitted perfectly and more than adequately secured the leaking joint. 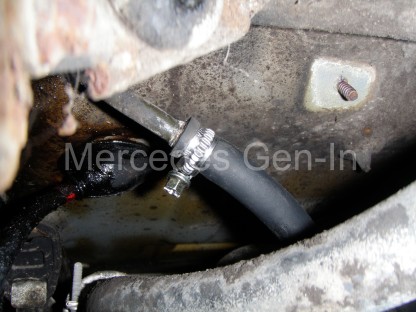 Attempting to twist the other connectors both on the pump and in-line filter did not reveal any weakness in the other clamps, so I decided to rebuild the unit and call it a day.  Before I replaced the plastic cover, I ran the engine for a while and gave the area a good looking at with a torch, prodding and poking the running pump and its pipework to make doubly sure all was well before putting the cover back on. 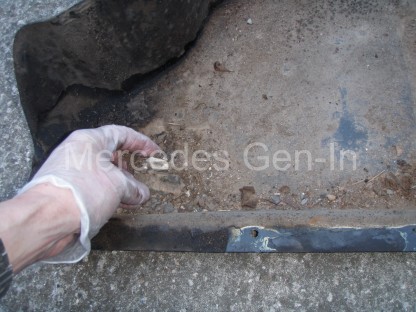 Amazed by the amount of road muck that had collected inside the cover, I gave it a good clean out before refitting.  Lowering the car to the ground I was pleased at least that the leak had not turned out to be problems with the steel delivery hose that runs over the differential – as that looks an absolute swine to replace. 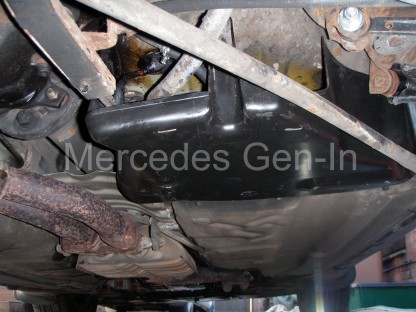