The Garrett variable vane turbocharger (Garrett GT18V VNT and its derivatives) are fitted to the diesel Mercedes Sprinter van and most of the modern range of light commercials and passenger cars with very little difference in design, so this post generally covers all but a very few of the turbochargers currently used in Mercedes turbo diesel vehicles. There is more information available on the Turbocharger control circuit, Limp Home (LOS) Faults and component descriptions here: http://www.mercedes.gen.in/WP35/mercedes-sprinter-turbo-limp-home-los-diagnosis-fault-finding/

You will no doubt be aware of the huge replacement cost of a Turbo, and often used parts prices escalate into a ‘tear welling’ hit into the wallet.  I decided to rebuild my turbocharger at home using an aftermarket core kit, overhauling the complete unit as a result.  The core kit cost is £150.00 – an incredible cost saving for what will be a good as new turbo.  Here’s how it went… 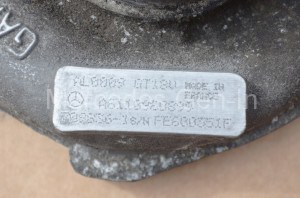 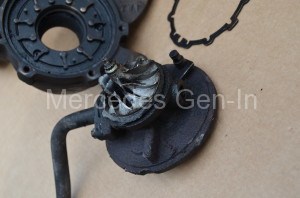 One of the first things you will need to find is the model number of your turbocharger, the core supplier will need this number to match identical parts to your rebuild.  The model number is engraved on a flat plate on the aluminium intake scroll casting, you may need some fine abrasive paper to clean it so that it is visible. 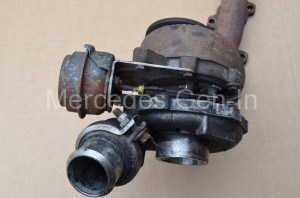 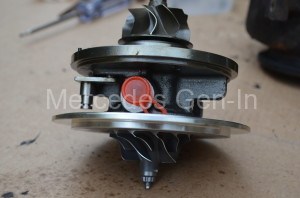 The Garrett variable vane turbocharger works by modulating the pitch of a number of vanes within the exhaust scroll casting, these vanes direct or concentrate the flow of the exhaust gasses onto one end of the turbo charger spool.  The more concentrated the flow of gas the faster the spool spins.  The vanes are adjusted by the rotation of a control ring and lever that is connected to an external actuator. (Commonly a vacuum actuator on early vehicles and an electronic positional servo motor on some later models variants)  By varying the control to the actuator, the turbo vanes can be called into play or requested to idle by the engine management system.   The turbo spool shaft passes from the exhaust chamber of the turbo through a series of seals and high speed oil cooled bearings to the intake side where it drives an opposing spool wheel that compresses intake air at a rate controlled by the passage of exhaust gasses – the faster the assembly rotates on the exhaust side the greater intake charge pressure is generated. 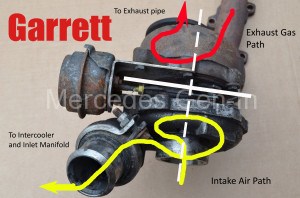 How it works – gas flows

The turbo I had on the bench had failed catastrophically, the spool shaft had disintegrated and destroyed both spool wheels, eventually shearing the shaft into two parts.  I was now about to rebuild the unit to ‘as new’ serviceable condition.  The removal of the turbo from the vehicle had previously been done, its far safer to remove the complete exhaust manifold with turbo connected, than to risk removing the three turbo to manifold flange bolts, that will almost certainly shear off in the process.  You have been warned !

Remove the actuator from the turbo and set it aside, mark the location of the aluminium intake scroll flange and plate then remove all the 8mm washer-bolts from the flange edge.  Once all the bolts are removed tap the housing to free off the flange and remove the intake scroll. (Clean parts off as you go!) 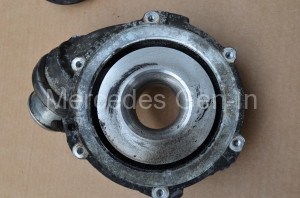 Then remove the flange bolts and washers from the exhaust scroll.  Use penetrating oil or diesel soaked into the flange seam to assist in freeing it off.  Tap gently the housing with a copper faced hammer or wooden block, working your way around the circumference.  Eventually it will come away.  Be sure to watch for the large vane adjusting ring and the three small guide pins and wheels that secure it to the internal plate.  Don’t worry where they came from at this stage as it can only go back together one way, just catch the parts and do not lose them!

Now that the exhaust scroll housing is removed the main scroll and vane section can be treated generously to a can of Mr Muscle oven cleaner or similar, to soften and help free off the internal components that will be coated with soot and carbon deposits.  Do not use oven cleaner on the alloy intake scroll as it will be attacked by the spray cleaner – just use cleaner on the cast iron or steel parts.  Once rinsed off with water begin a further clean up the steel parts. 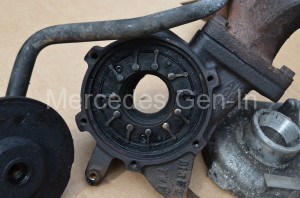 Remove the three torx head screws securing the vane plate to the scroll housing, as you lift out the ring vane plate be sure to catch the three spacers from behind.  Put these spacers in a safe place, along with the torx screws.  Clean off as much of the carbon deposits from the vanes, vane ring and housing as possible and remove all scrapings etc.  Be sure to clean/scrape all the flange locating grooves to make sure that when things are seated on reassembly, components flush fit without binding or rocking. 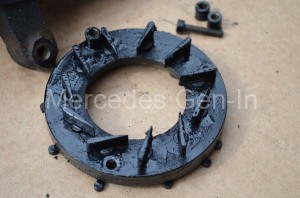 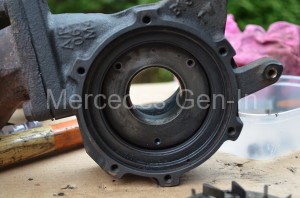 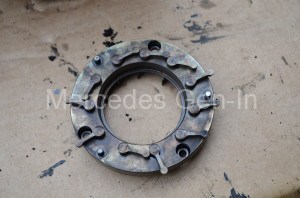 Once all the parts are as clean as you require begin the reassembly.  Start by refitting the vane ring to the exhaust scroll, using the three torx screws and spacers put to one side earlier.  Now look around the flange face for a single small drilling that locates the spool core roll pin stake.  This is the locator of the vane actuating ring positional slot engaging with the lever mechanism that passes through the spool housing to the outside world.  Position all the vane levers in their associated slots in the adjusting ring, then position the three slotted guide wheels and axle pins into their place on the ring vane plate.  Check the rotary movement and actuation of all the vanes by turning the inner ring back and forth, almost no resistance to movement should be felt in the mechanism. 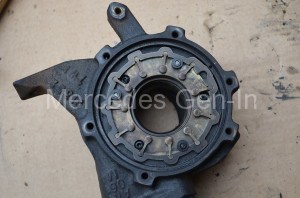 You are now ready to fit the new turbo core.  Align the vane adjusting ring with the flange roll pin hole and hold the external vane actuating lever on the new core in the correct position whilst pushing together and locating the flange.  The core exhaust face should now be a comfortable push fit and have located flatly against the scroll flange, with equal lip protrusion all around its circumference.  Once you are sure all is well and it is assembled correctly, check the vane actuating lever for correct operation. You should just about be able to see the vanes move between the new turbo spool wheel and the inside of the exhaust scroll housing – using a torch makes this easier.  Begin to tighten down the ring bolts and washers evenly.  Now is the time to replace the actuator and fit it to the actuator lever, as the fixing bolts form part of the flange clamping arrangement. Refit the actuator lever arm circlip and adjust the lever stop to exactly the same position (protrusion) as the original stop on the discarded old core. (8mm spanner and small ball end hex key to adjust) 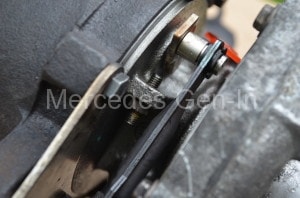 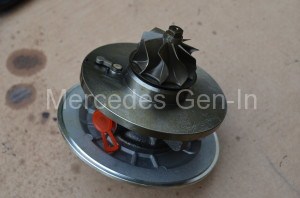 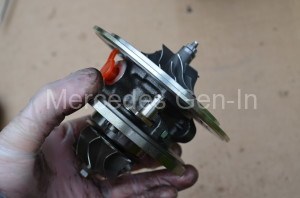 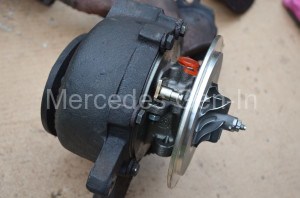 Now you can fit the intake scroll casting to the new core assembly.  Noting the location marks you made before disassembly on the alloy flanges, replace the scroll casting in the correct position and secure with the ring of 8mm washer head bolts, tightening evenly and steadily as you go. 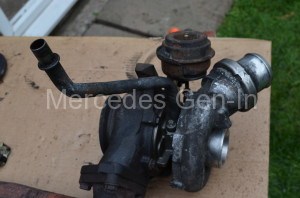 Everything is now back together, notice the added oil return pipe, this had been cleaned with paraffin and a ‘pull through’ made from a piece of rag on string.  Fit a new fibre gasket to this pipe and finger tighten only, the free end has to be orientated into the sump pocket and this can severely hamper the replacement of the exhaust manifold if otherwise tightened.  Save the last return pipe fixing ‘nip-up’ until its all in position on the vehicle. (Its a pig to get to, but it is possible with a stubby 1/4 drive 8mm socket and short extension from beneath the vehicle) 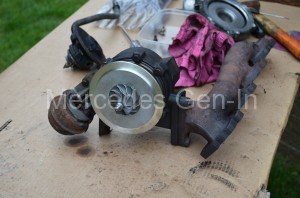 Once the assembly is totally rebuilt and fitted to the vehicle, it needs to be ‘primed’ with oil before the engine is run.  I have found the best way to do this is to position the oil feed pipe and use a syringe to squirt engine oil into the turbo core before fitting the banjo bolt and washers.  Then take a screwdriver and slide-disconnect the electrical plugs to the four injectors on the cylinder head.  (This will prevent the vehicle starting before priming is completed)  After checking the oil feed banjo bolt is tight and having tightened the drain return pipe fasteners, crank the engine in 15 second bursts, 30 seconds waiting – 7 or 8 times.  This should initially prime the turbo oil ways ready for engine starting.   All text books and manuals say:  ”to check oil prime, remove oil return pipe, crank engine without firing and wait for oil to emerge….”  in reality the return pipe is virtually impossible to remove or refit with the turbo in place so the above method was substituted.  Do feel free to remove the pipe and watch for oil as per the manuals and instructions if you wish!  Once ready for starting clip back the injector electrical plugs, start the engine and allow it to idle for a few minutes without revving.  Once happy that all is well, reconnect the vac pipes and hose work that was removed to the allow turbo removal and road test.

I hope this saved you some money !