This is a quick overview on how to replace, or adjust, the reverse light switch on the Mercedes Vito W639. to address issues I was having where my reverse lights weren’t coming on all of the time.

If I wiggled the gearstick around the reverse/neutral position, they would flick on and off intermittently. So the switch was (sort of) working and I also knew the fuses/bulbs were okay. So I decided to try and check the reverse light switch adjustment.

The switch is actually located inside the vehicle about 6 inches below the gear lever, behind the lower facia. To actually get to it wasn’t too difficult. The first thing to do was to remove the lower centre panel, this is only held on by 2x torx screws (T25 in my case) on each side. 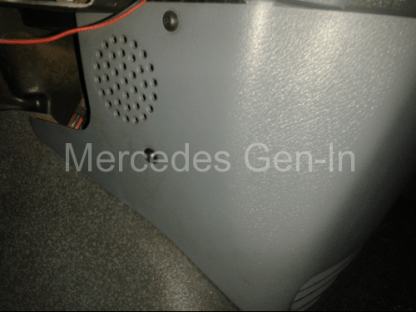 Once that panel was removed, I took out the ash-tray and removed the surround from around the gear lever. This is just clipped in and should pull free without too much effort.  This should now allow you access to the 5 torx screws (still T25) that hold in this console.

There are 2 lower screws at each side (Fig 2), 2 just inside and behind the gear lever enclosure (Fig 3) and one at the top left (Fig 4). 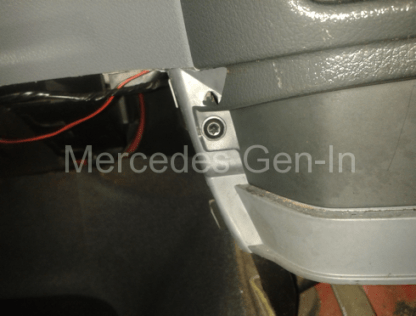 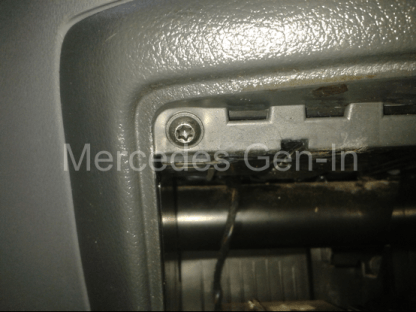 Once these screws have been removed you should be able to pull the facia away from the dashboard. There are just 4 locating clips (2 on either side) now holding it in. NOTE: Only pull the console out far enough so that you can remove the plug from the rear of the cigarette lighter before fully removing.  When the console has been removed, you should now be able to see the reverse light switch to the right and below the gear lever (right-hand drive vehicles) Fig 5. 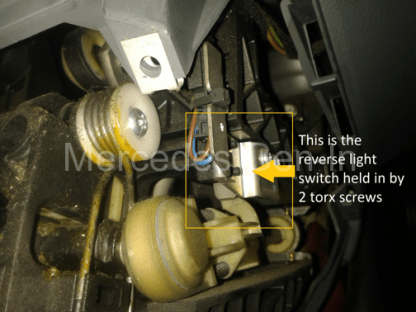 In the next photos, I have tried to show what is supposed to happen when you select reverse gear.

The flat plastic ‘shelf’ is supposed to push up against a sort of ‘L’ shaped spring steel lever (Fig 6) which, in turn, pushes up against a small micro-switch which is then supposed to turn on the reverse lights (Fig 7).  In Fig 7, the reverse light switch has been removed for clarity just to show in detail the steel lever and Micro-switch assembly. 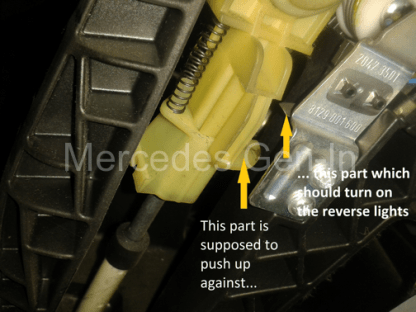 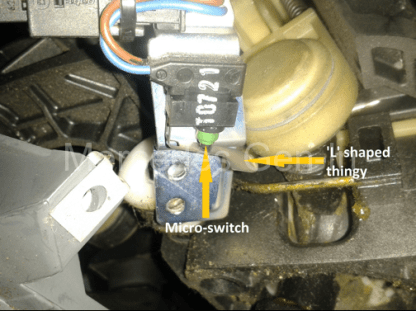 Once I had taken the switch off, I simply (and carefully) bent it slightly downwards so that it made contact with the flat plastic ‘shelf’ section on the gear linkage. Refitted the switch and tested. All worked well and in the traditional vein of the Haynes manual, refitting was the reverse of removal. Although I’ve just realised, I forgot to re-connect the cigarette lighter !

The above article was submitted to Mercedes Gen-In with thanks to:
Peter Johnson of ‘Enhance With Vinyl’
www.enhancewithvinyl.com